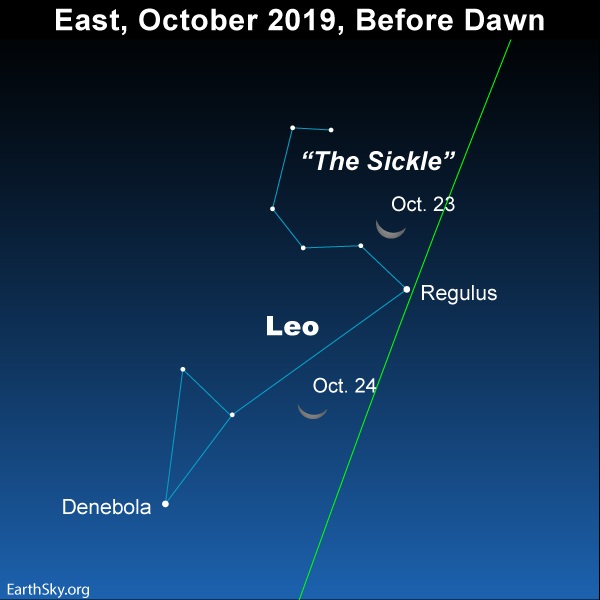 Before dawn on October 23 and 24, 2019, watch as the moon slides in front of the constellation Leo the Lion. Then, as the morning darkness begins to give way to dawn, watch for the planet Mars to climb above the sunrise point on the horizon. Leo’s starlit figure will be found in the eastern (sunrise) direction, in the predawn sky, at which time Mars will still be beneath the eastern horizon. Mars will only come into view as dawn’s light begins to increase. See the chart at the bottom of this post.

Leo is identifiable for the prominent backwards question mark pattern within it; this pattern is a well-known asterism, called The Sickle. Although the chart at top is especially designed for North America, you’ll see the moon in the vicinity of the star Regulus from around the world. Before dawn on these same dates in the world’s Eastern Hemisphere, you’ll see the moon offset farther westward (upward) relative to the backdrop stars of the zodiac than we do in North America. For your specific view, at your location on the globe, try Stellarium.

Regulus is part of a backwards question mark pattern known as The Sickle in Leo. That pattern represents Leo’s head and shoulders. Notice the star Denebola, at the rear of Leo. Many stars have deneb in their name. It means tail, in this case the tail of Leo the Lion. Image via Derekscope.

For all of us, the illuminated portion of a waning moon always points eastward, toward the coming sunrise. Eastward is also the moon’s direction of travel in front of the background stars of the zodiac. This motion of the moon in our sky is, of course, due to its movement in orbit around Earth.

In the period of one day – between the mornings of October 23 and 24 – you can easily see the moon’s change of position relative to Regulus, the constellation Leo’s only 1st-magnitude star, located at the bottom of the backwards question mark pattern. Regulus depicts the Lion’s Heart and is sometimes known as Cor Leonis.

And then of course the moon will keep moving, morning after morning, until it falls into the sun’s glare. New moon will come on October 27-28, 2019. But before this waning moon drops into the sunrise, use it to glimpse Mars, which is just now returning to the eastern sky at dawn. 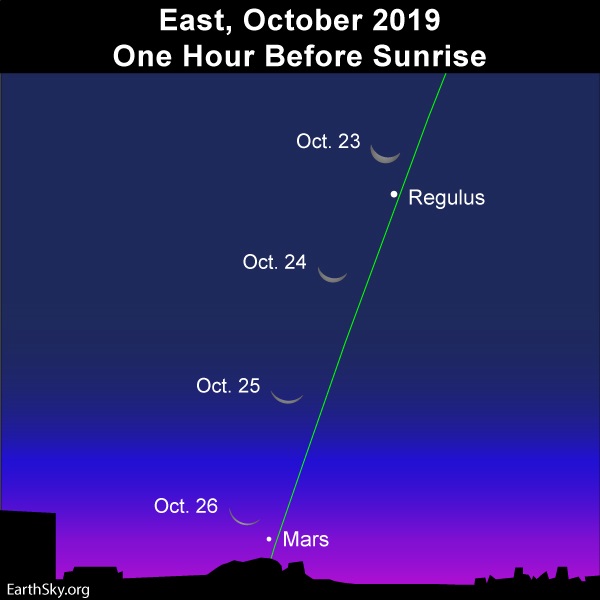 Look for Mars near the sunrise point on the horizon as the predawn darkness is giving way to morning twilight. Here are the approximate rising times for Mars at various latitudes (presuming a level horizon in the direction of sunrise):

Mars has only recently entered into the morning sky, and is only modestly bright right now. So you may need binoculars to view this world from southerly latitudes in the Southern Hemisphere, where Mars sits low in the glare of morning twilight. Day by day, however, Mars rises earlier before sunrise, and is slowly but surely brightening. So keep looking!

By the way, here’s a bit more about the ecliptic. The ecliptic – path of the sun, moon and planets – is always shown in green on EarthSky sky charts. It’s like a center line on the great big celestial highway. It divides the band of stars that we call the zodiac into its northern and southern sides. The star Regulus in Leo is the only 1st-magnitude star to align almost squarely with the ecliptic. Regulus lies a scant 1/2 degree north of the ecliptic. For reference, the moon’s angular diameter equals about 1/2 degree.

Bottom line: Get up before dawn to see the moon and the starry figure of Leo the Lion in the eastern sky. Then, as darkness gives way to dawn, use the lit side of the waning lunar crescent to find the planet Mars near the sunrise horizon.