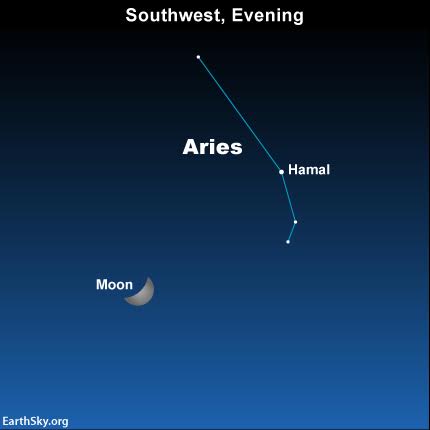 Tonight – February 13, 2016 – you might or might not see the rather faint constellation Aries and its brightest star, Hamal, to the north of the wide waxing crescent moon. When you see tonight’s moon, you might also enjoy knowing it’s in the part of its orbit that’s carrying it away from Earth. What’s more, over the long course of time, the moon’s mean distance from Earth is increasing as well.

So, in both ways, we have a receding moon on this night!

Like virtually all orbits in space, the moon’s orbit around Earth is not a perfect circle, even though it’s very nearly circular. In February, 2016, the moon sweeps to perigee – its closest point to Earth – on February 11 (364,360 kilometers), and then it swings out to apogee – its farthest point – on February 27 (405,383 km).

In a sense, we can regard the moon as receding from Earth right now, because the moon was at perigee a few days ago, and is now heading for its February 27 apogee.

On the other hand, when astronomers talk about a receding moon, they are usually referring to the moon’s increasing mean distance from Earth.

Yes, it’s true. The moon’s mean distance from Earth is increasing over time.

How do we know? First of all, Edmund Halley’s studies of ancient solar and lunar eclipses suggested the possibility. More recently, Apollo astronauts placed laser reflectors on the moon from 1969 to 1972, which enabled astronomers to measure the moon’s distance with great accuracy since then.

The moon’s mean distance has been found to be increasing at the rate of about 3.8 centimeters (1.5 inches) per year.

Geologic evidence indicates that much more recently, some 900 million years ago, there were about 480 18-hours days in one year. At that time the moon was about 90% of its present distance from Earth.

In our day and age, the moon’s mean distance is 384,400 kilometers (238,855 miles). Sometime in the distant future, the moon will recede far enough from Earth so that the moon’s disk can no longer completely cover the sun during a solar eclipse. That means total solar eclipses will become a thing of the past.

Bottom line: We have a receding moon on the night of February 13, 2016, in two ways. The moon has passed its monthly perigee or closest point, so is now moving farther from Earth again. Over the long course of time, the moon’s mean distance from Earth is also increasing.

Thank you! Your submission has been received!
Oops! Something went wrong while submitting the form.
END_OF_DOCUMENT_TOKEN_TO_BE_REPLACED