Hamal is an ancient equinox star

It’s not a super-noticeable star, but Hamal is the brightest star in Aries the Ram and can be found fairly easily. Plus Hamal has a special place in the history of the Earth and sky.

These are star trails, and one of the brightest trails here is Alpha Arietis, or Hamal. To learn which one, click here, then click on the image you find. This neat image is via Herb Raab on Flickr.

Hamal – also known as Alpha Arietis – shines as the brightest star in the constellation Aries the Ram. This star and two others – Sheratan and Mesarthim – make up the Head of the Ram. Aries is small. But the compact pattern of these three stars makes Aries relatively easy to find. As seen from mid-northern latitudes, Hamal lights up the eastern sky on autumn evenings, shines high in the southern sky on winter evenings, and sits in the west on early spring evenings. It’s easily visible from Earth’s Southern Hemisphere, too … try using Stellarium to find Hamal from your exact location on the globe. As seen from the whole Earth, Hamal disappears from the night sky around April. It returns to the eastern sky before sunrise by late spring or early summer, to begin another cycle of visibility.

It’s fun to spot Hamal and its brother stars in the night sky. But this star also has a profound significance in the history of astronomy as an ancient equinox star.

In other words, in our modern era, if you could see the stars in daytime, you’d see the sun and Hamal in conjunction – lined up with one another, due north and south in right ascension – on or near April 24. But, long ago, they were in conjunction exactly at the March equinox. 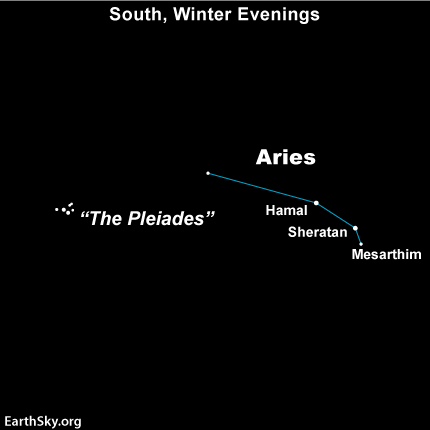 Most people see the constellation Aries as three stars in a compact grouping. The stars are Hamal, Sheratan and Mesarthim.

Nowadays, April 24 – the date of Hamal’s conjunction with the sun – is a little more than one month after the March equinox, which always takes place around March 20. This is the Northern Hemisphere’s spring equinox, and it’s a time of renewal throughout the northern half of Earth. So of course this time of year had significance to our ancestors, who were much more aware than we are of their dependence on the land and sky.

So you see that the location of the sun at the March equinox sun drifts in front of the stars. It moves westward in front of the backdrop constellations by about one degree (two sun diameters) every 72 years. This drifting is due to a well-known motion of Earth called precession, or sometimes the precession of the equinoxes.

Even so, many people pay homage to the Ram and still refer to the March equinox point as the First Point of Aries. 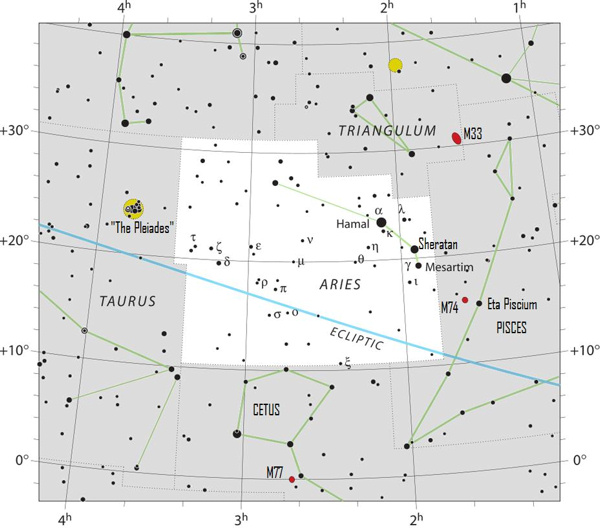 Nowadays the sun passes in front of the constellation Aries from about April 19 to May 13. Click here for a larger chart

Bottom line: The star Hamal is the brightest star in Aries the Ram. Thousands of years ago, the sun was in conjunction – or aligned north and south – with this star at the time of the March equinox.