Keep an eye out for Mercury and Mars

The first week or even two of December 2019 should provide a good view of Mercury in the morning sky for northerly latitudes. The planet is bottommost on a line with the red planet Mars and bright star Spica, in the east before sunup.

Mercury, the innermost planet, reached its greatest elongation from the sun on November 28, 2019. In other words, that date marked Mercury’s farthest point from the sunrise on the sky’s dome for this morning apparition. Mercury was 20 degrees west of the sun then, but – for the coming week at least – you can still find this planet before sunup. It’ll be in the east, more or less on line with the red planet Mars and the bright blue-white star Spica in the constellation Virgo.

The red planet Mars, which is also up before dawn’s first light, is found below Spica and above Mercury. However, Mars is about half as bright as Spica, and may fade from view by the time that Mercury rises. If you’re up before dawn, Mercury may have yet to rise. Keep in mind, though, that an imaginary line drawn from Spica through Mars pretty much points to Mercury’s rising point on the horizon.

For your specific view of Mercury, Mars and Spica on various dates, try Stellarium 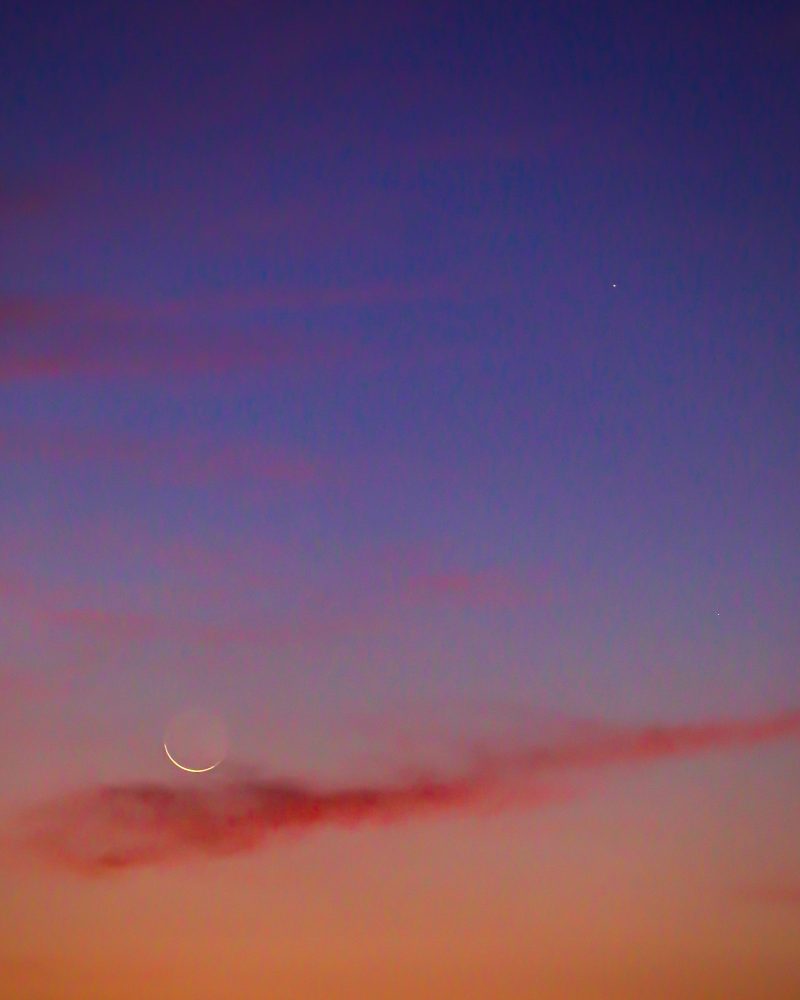 View at EarthSky Community Photos. | Karl Diefenderfer was in Doylestown, Pennsylvania on Monday morning, November 25, 2019 when he caught the very old moon and Mercury. Thanks, Karl!

From northerly latitudes, Mercury will remain in fine view into the first week or two of December. Watch for this world near the sunrise point on the horizon as the predawn darkness begins to give way to dawn. We give the approximate rising time for Mercury – for around early December – at various latitudes (given a level horizon): 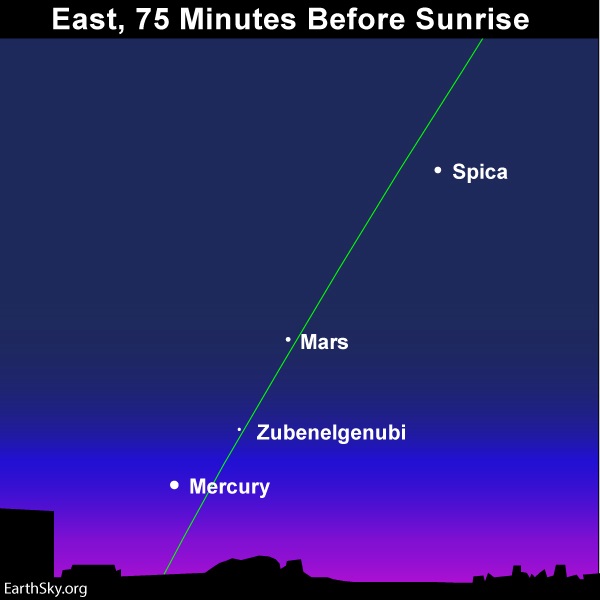 The planet Mars and Zubenelgenubi – the alpha star of Libra the Scales – shine near each other in the predawn sky by early December, but may fade from view by the time that Mercury rises. Look for Mars very close to Zubenelgenubi on December 12, 2019.

How should you look for Mercury? After all, it’s often called the most elusive planet – not because it’s faint – but because it’s always near the sun in the sky, generally only visible in twilight. First and foremost, find an unobstructed horizon in the direction of sunrise. At mid-northern and far-northern latitudes, you may well see the celestial line-up – Spica, Mars and Mercury – in the darkness before daybreak.

Your best bet for spotting Mercury, the innermost planet, is to get up before dawn’s first light, or the beginning of astronomical twilight. Extending the Spica-Mars line to the horizon shows you (more or less) where Mercury will rise into your sky, as the predawn darkness gives way to morning twilight.

Bottom line: Mercury’s greatest elongation was November 28, 2019, but don’t let that stop you from looking for the planet for some mornings to come. Look east before sunup. Mercury will be on a line with the bright star Spica and red planet Mars. If you’re in the Southern Hemisphere, the view is tougher to catch; bring along binoculars. Catch Mercury now because – for all of us – this world will become lost in the glare of sunrise before 2019 ends.