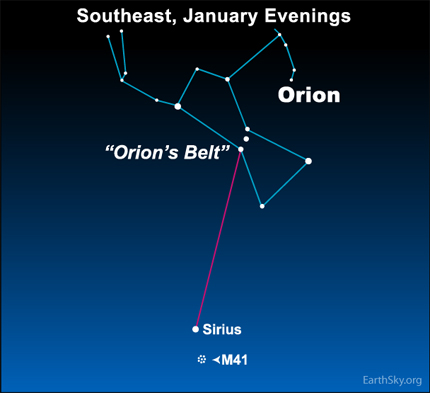 Want to see a star cluster? Then just look for nighttime’s brightest star, Sirius, in the constellation Canis Major the Greater Dog. A lovely star cluster – called Messier 41 or M41 – lies near Sirius. If you can’t see the star cluster, it’s probably because your sky isn’t dark enough. Try binoculars.

Sirius is easy to spot. It’s bright, brighter than any other star you’ll see in the evening sky now. What’s more, Sirius is easy to find because the three prominent Belt stars in the constellation Orion the Hunter – three stars in a short, straight row – always point to it.

M41 lies about four degrees almost exactly south of Sirius. The cluster looks fuzzy, not like a pinpoint star. M41 can be seen with the eye alone in a dark sky. It’s likely been spotted by individuals with particularly good vision throughout human history. Sometime before 1654, the early astronomer Giovanni Battista Hodierna noticed M41 and placed it in his catalog of comets and other celestial objects. In the late 1700s, M41 was one of the objects that astronomer Charles Messier (1730-1817) thought could be mistaken for a comet. He was looking for comets, and so compiled a list of these objects to avoid in his now-famous Messier Catalog. 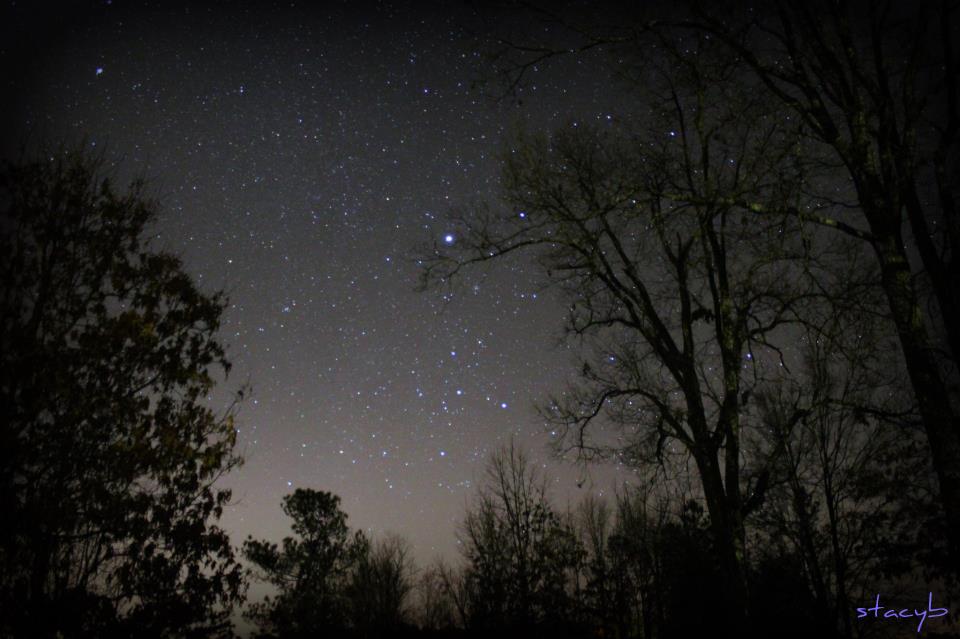 View larger. | The bright star is Sirius in the constellation Canis Major, the Greater Dog. The star cluster M41 can be seen as a fuzzy object below right of Sirius. Photo by EarthSky Facebook friend Stacy Oliver Bryant. Thank you, Stacy!

M41 is also sometimes called the Little Beehive, after the famous Beehive star cluster, also known as M44, in the constellation Cancer.

Both M41 and M44 are what astronomers call open star clusters. They are loose collections of stars, located in the flat disk of our Milky Way galaxy, born from a single cloud of gas and dust in space. These sibling stars still move together through space. They are very beautiful when viewed through binoculars or a small telescope.

Like most open star clusters of its type, M41 is relatively young, probably between 190 and 240 million years old. By contrast, our sun is thought to be 4 1/2 billion years old.

The cluster – whose true diameter in space covers about 25 light-years – contains about 100 stars including several red giants.

At mid-northern latitudes, Sirius and M41 stay out until roughly 4 a.m. local time at this time of year.

So enjoy Orion, the star Sirius and M41 on these January and February evenings. And by the way, there are over 100 of the so-called Messier objects or M-objects known today. Today’s amateur astronomers consider them among the most prized objects to be viewed through binoculars and small telescopes. Here’s a list of M-objects. Advanced amateurs can observe them all and can earn a Messier certificate from the Astronomical League.

Bottom line: No matter where you are on Earth, look for the sky’s brightest star, Sirius, in the month of January. If your sky is dark enough, notice the faint fuzzy object near the bright star Sirius. This object is called M41, and it’s a distant cluster of stars.