The Venus-Neptune in conjunction on January 27 was the closest planetary conjunction of 2020. But – because Neptune is so faint – it wasn’t easy to capture. Plus a star near Venus confused people! 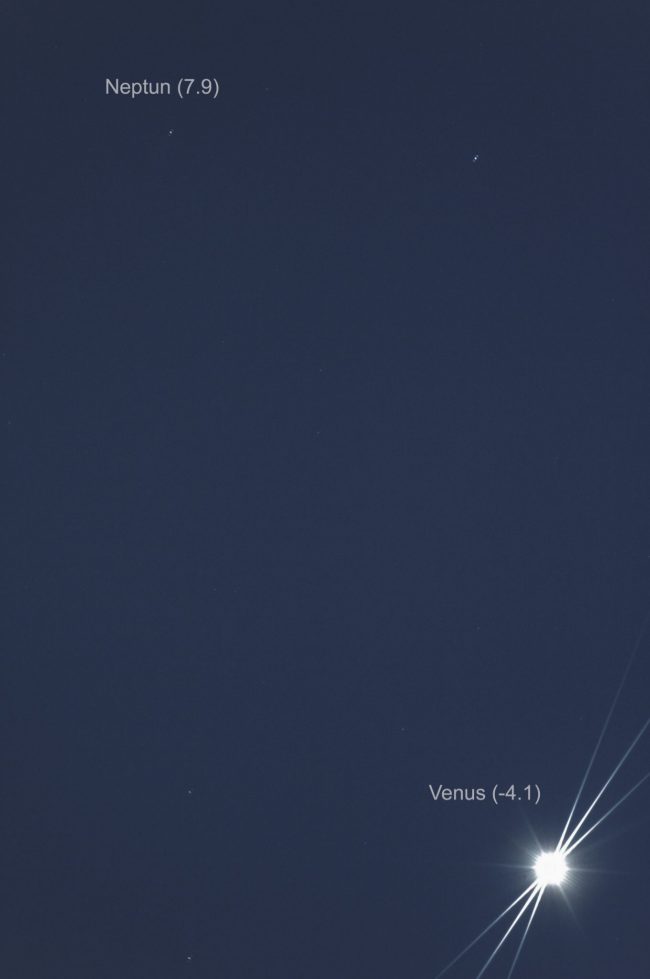 View at EarthSky Community Photos. | This image by Radu Anghel in Bacau, Romania, shows the contrast in brightness between Venus (the sky’s brightest planet) and Neptune (the only major planet in our solar system you absolutely cannot see with the eye alone). Their conjunction was one day after this image was taken, on January 27. At conjunction, Venus and Neptune passed within only 1/12th of one degree. For comparison, the moon spans about 1/2 degree in our sky. Thank you, Radu!

A Venus-Neptune conjunction took place on January 27, 2020. It was the closest conjunction of any two planets this year, with Neptune only 1/12th of one degree from Venus on our sky’s dome. And yet – because Neptune is so distant (the most distant major planet in our solar system) – the Venus-Neptune conjunction wasn’t easy to catch, even with optical aid. Venus was about 60,000 times brighter than Neptune!

Plus, as the conjunction was taking place, Venus was noticeably near 4th magnitude star Phi Aquarii. Many did indeed mistake Phi Aquarii for Neptune. Phi Aquarii, though rather faint, is a good 30 times brighter than Neptune and can be seen by the eye alone on a dark night.

For many of us, it’ll be easier to view Neptune with an optical aid several days to a week after the January 27 Venus-Neptune conjunction. Venus will have moved away from Neptune, yet Neptune and the star Phi Aquarii will remain close together. This dim star will allow you locate Neptune, absent the glare of Venus.

By the way, for all of these photos, you might want to click in and view them larger at EarthSky Community Photos, to have a better shot at glimpsing faint Neptune! 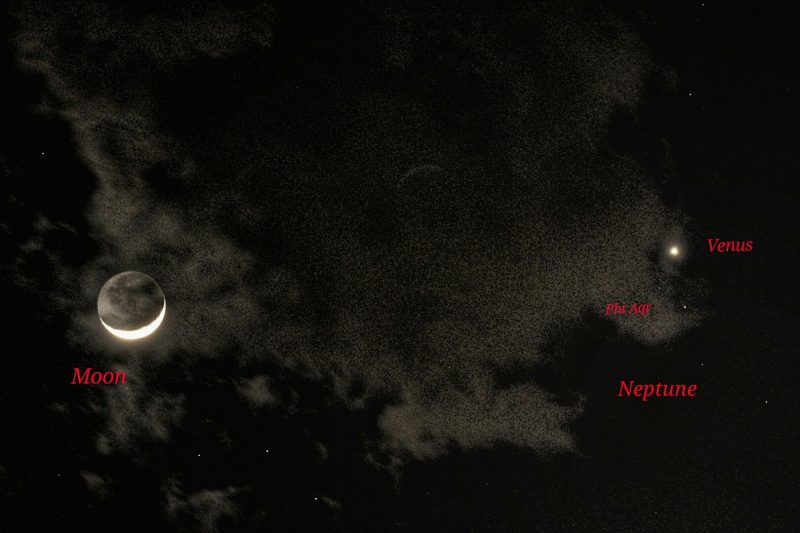 View at EarthSky Community Photos. | The waxing moon with Venus – the 2 brightest objects in the night sky – with faint Neptune on January 28, 2020. Image via Rupesh Patel in Gandhinagar, Gujarat, India. Thank you, Rupesh! 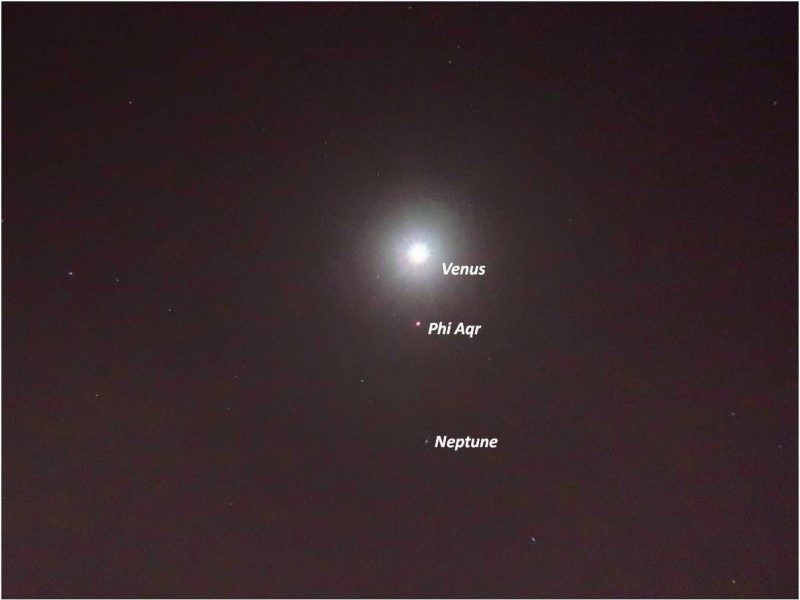 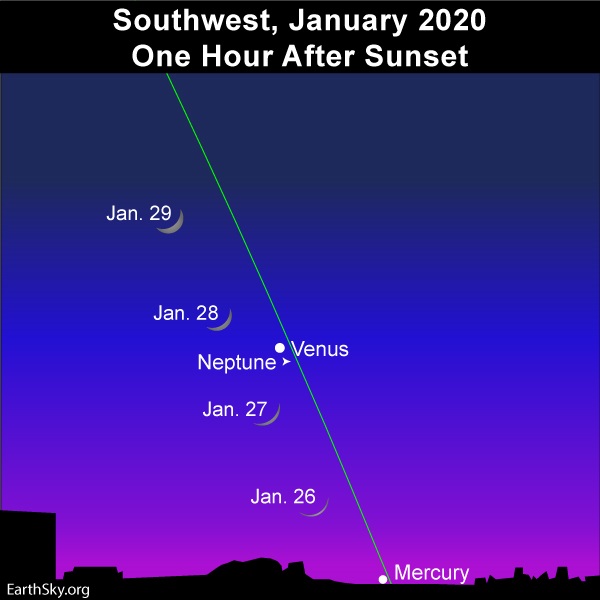 The waxing moon swung close to Venus this week. You can still see the moon near Venus on January 29, 2020. Look west! 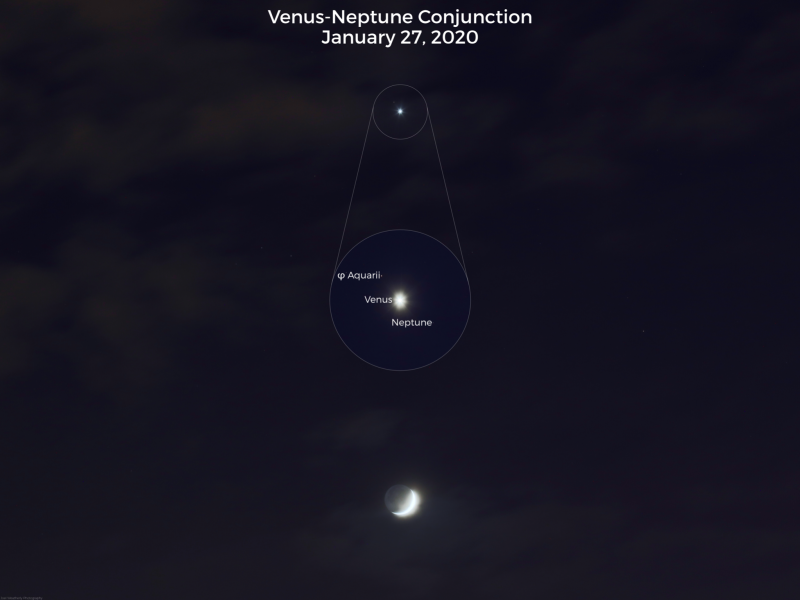 View at EarthSky Community Photos. | Joel Weatherly in Edmonton, Aberta, Canada, caught the moon, Venus and Neptune on the night of the conjunction, January 27, 2020. He wrote: “Despite invading clouds, I had to try to glimpse a view of Venus, Neptune, and the moon together in Edmonton’s evening sky. Light pollution, Venus’ glare, and clouds made Neptune difficult to view and photograph but the planet’s signature blue was visible. Venus was bright enough to develop a striking halo and present diffraction spikes. The moon, while not the focus of my viewing, was also a lovely sight being 9.1% illuminated, Earthshine was plainly visible.” Thank you, Joel! 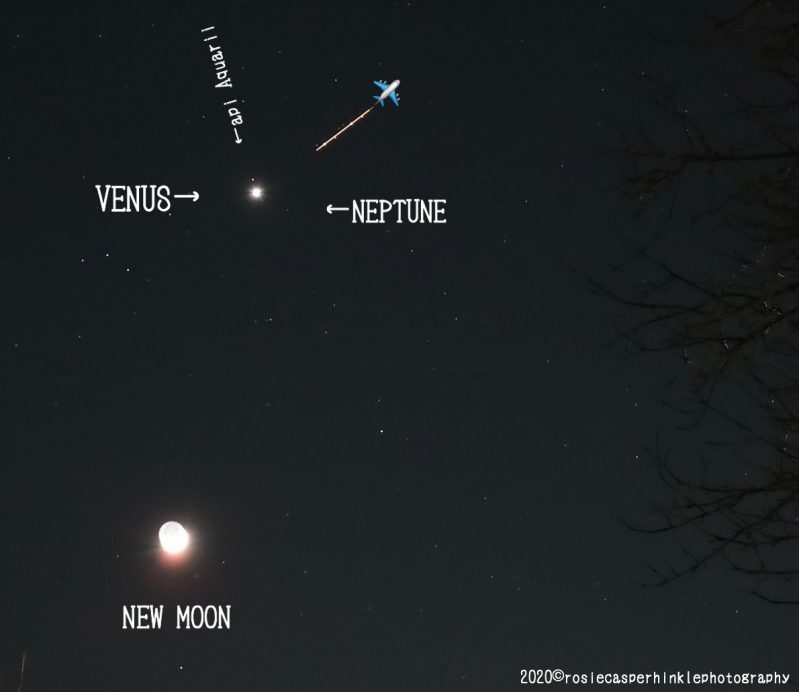 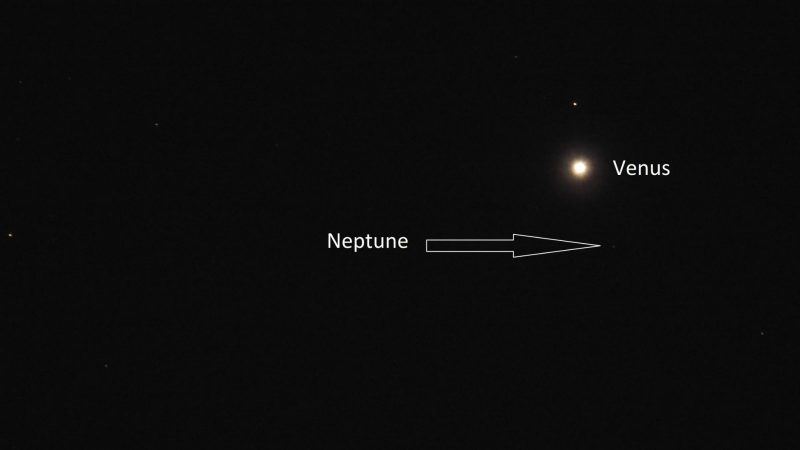 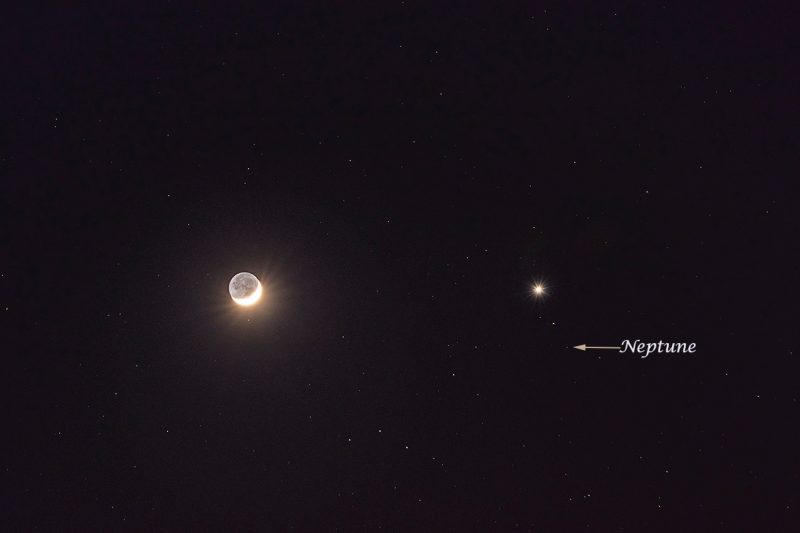 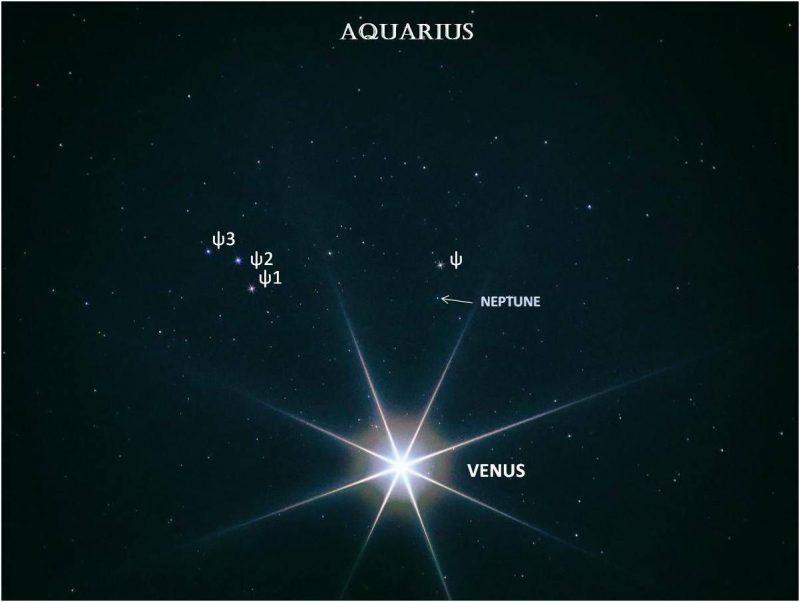 View at EarthSky Community Photos. | Amateur astronomers with small telescopes began training them on Venus some days before the conjunction. Dr Ski in Valencia, Philippines, caught Neptune near Venus on January 25, 2020. He wrote: “The conjunction of Venus and Neptune will occur 2 nights from now. But Neptune will be lost in Venus’ glare and very difficult to image. Venus is 60,000 times brighter than Neptune! Even tonight I cannot make out Neptune through my binoculars.” Thank you, Dr Ski!

Bottom line: Photos from the EarthSky community of the Venus-Neptune conjunction on January 27, 2020.