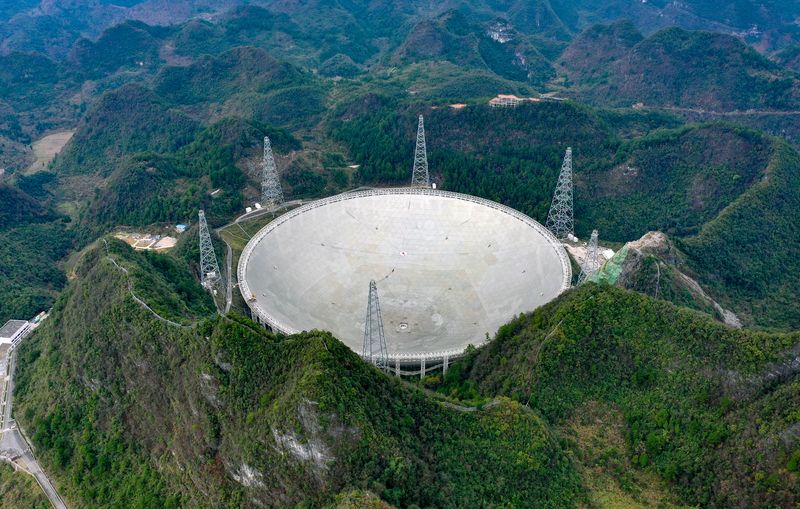 Radio astronomy suffered a blow in late 2020 when the legendary Arecibo telescope in Puerto Rico – damaged by recent hurricanes – became non-functional. The National Science Foundation had just announced in November 2020, that Arecibo would be dismantled. Then, on December 1, all hopes of saving the beloved telescope were dashed when its 900-ton receiver platform fell onto the giant reflector dish below. In recent years, Arecibo – once the world’s largest radio telescope composed of one single dish – had been overtaken by a larger telescope in southwest China. Now astronomers requiring high sensitivity radio data have their interest pinned on that telescope – the Five-hundred-meter Aperture Spherical Radio Telescope, or FAST – which was declared fully operational as recently as January 2020. Now there’s more news. XinhuaNet.com reported on January 4, 2021, that FAST is opening up to foreign observers, with proposals for observing projects due on April 1, 2021.

Around 10% of the observation time is expected to be awarded to international observation projects, with those observations slated to start on August 1, 2021.

FAST was built in a remote valley in China’s Guizhou province between 2011 and 2016. Its diameter is a whopping 1,640 feet (500 meters). FAST saw what astronomers call first light in September 2016; afterward, it underwent extensive testing. 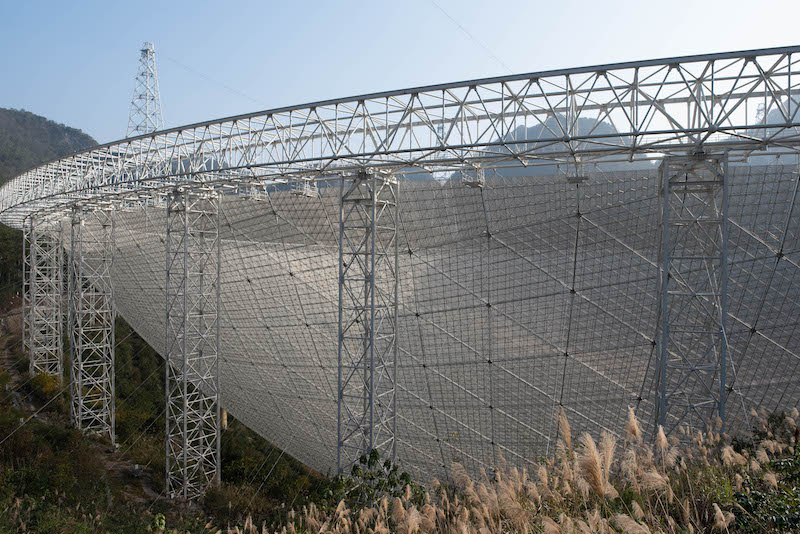 A section of FAST’s antenna dish seen from the side, revealing aluminum triangular panels, each with a side of 36 feet (11 meters). Image via astronomer Liyuan Lu from the Galaxy and Cosmology Group at Xiamen University, who captured this and the following images in 2017. Digital cameras are not now allowed at the site, in order to keep the the region radio silent so as not to disturb the astronomical observations. 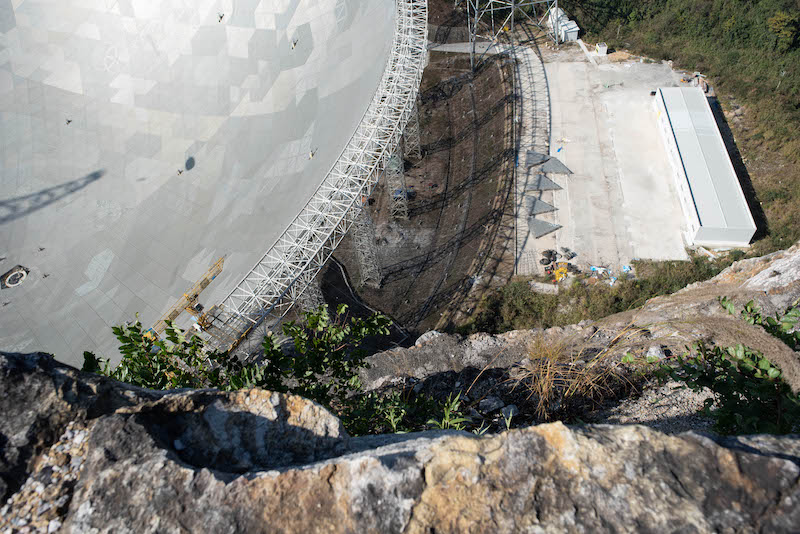 Triangular panels (right) with a side of 11 meters (36 feet), making up the FAST dish of the antenna. Image via Liyuan Lu.

How does this telescope compare with Arecibo? The two observatories are quite similar in that both were built in natural bowl-shaped depressions in a landscape. Thus both FAST and Arecibo only stare – more or less – straight up (at what astronomers call the zenith of the sky). The telescopes follow the rotation of the Earth to change the direction of view. I write “more or less” because the direction can actually be changed a little bit. The detectors suspended above each telescope’s wide dish, in a structure called a cabin, can be moved to follow an object for a few hours at a time. Also, in the case of FAST, the entire detector cabin can move, and, in addition, the dish itself is flexible, consisting of roughly 4,400 individual aluminum panels that can be pointed in different directions, making the dish able to focus on different areas of the sky. In contrast, Arecibo’s dish was stationary. This, together with the greater depth of the dish, makes FAST able to image a larger part (2-3 times) of the sky than Arecibo was able to. 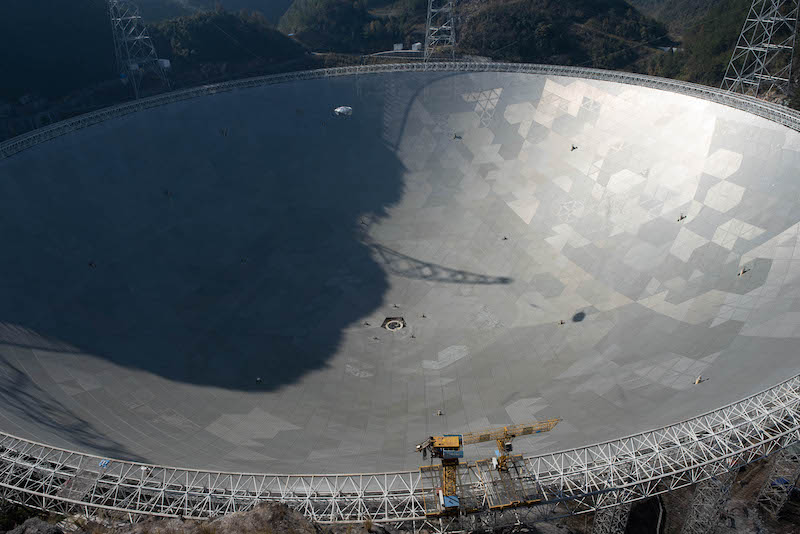 With its 500-meter (1,640-foot) dish, FAST has roughly twice the collecting area of Arecibo, which measured 305 meters (1000 feet) across. This makes it twice as sensitive. However, it is important to keep in mind that the effective diameter is never as large as the full diameter, and in the case of FAST, it is closer to 300 than 500 meters at any one time, due to its ability to follow a target for a longer time. The same was the case with Arecibo, but to a smaller extent, rendering it an effective diameter of 221 meters.

Can FAST be seen as a replacement to Arecibo? Indeed, FAST is the only other telescope that can observe to a similar (and better) sensitivity at similar wavelengths. Arecibo operated from a wavelength of 3 centimeters to 1 meter (1 to 39 inches, a little bit shorter to not fully as long as the wavelengths observed by FAST). But in addition, Arecibo was equipped with a transmitter able to send out strong radar signals. NASA had funded Arecibo’s Planetary Radar System, which let Arecibo study solid objects from Mercury to Saturn, and to perform very accurate orbit determinations on near-Earth objects, particularly potentially hazardous objects. It also let Arecibo send out a powerful interstellar message in 1974, our first intentional contact message to the cosmos. Such powerful transmitters are too large and heavy for FAST’s smaller receiver cabin. 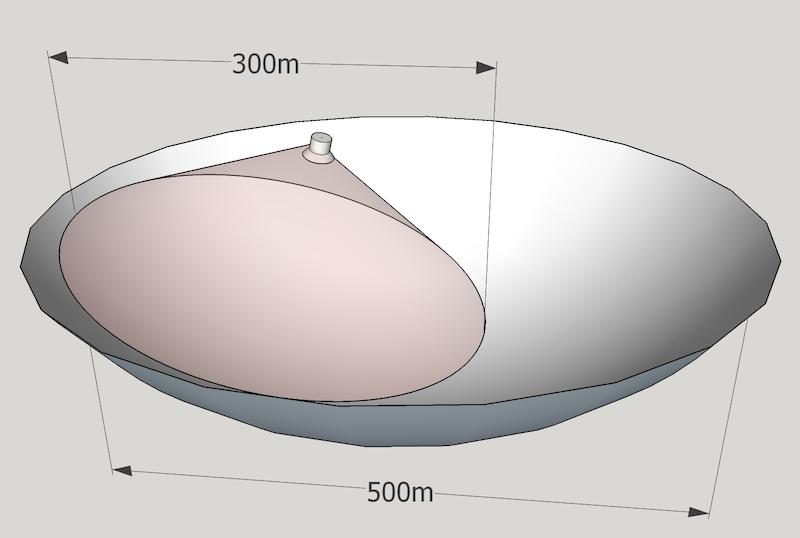 The effective aperture of FAST is 300 meters. Image via Phoenix7777, CC BY-SA 4.0, via Wikimedia Commons.

A radio telescope is like a giant radio receiver, listening for exceedingly faint radio wavelengths from space. Because radio is emitted at much longer wavelengths than visible light, the telescope must be much larger than an optical telescope to achieve sufficient resolution – detail – of what you observe. In the case of FAST, it is able to observe wavelengths from 10 cm to 4.3 meters (4 inches to 14 feet), a range that makes it possible to study areas of research including, but not limited to:

– Pulsars, not only local to the Milky Way, but also in other galaxies. Extragalactic pulsars were not possible to observe before, due to their distant signals being too faint for other telescopes. Since the commissioning of FAST, it has, to date (January 2021), discovered and measured 240 pulsars.

– Fast radio bursts. In August and September of 2020, FAST detected a fast radio burst called FRB 121102, which is too faint to have been detected by any other telescopes.

– Exoplanets have not before been (conclusively) detected at radio wavelengths. FAST is, however, powerful enough to detect polarized radio emission. Such emission would indicate a planet harboring a strong magnetic field, something astronomers believe is likely necessary to protect potential life (as for Earth). Even the large size of FAST does not give enough resolution to pinpoint something as small as a planet, but this will be helped by adding on 36 small 5-meter dishes into an array, which will increase the resolution (ability to see clearly) by 100 times.

– Neutral hydrogen – the most abundant element in the universe, emitting at 21 cm – in both the interstellar medium of our Milky Way galaxy and in other galaxies.

The telescope will also be part of interferometry observations in which it will be connected with other telescopes in the world, such as the VLBI network. 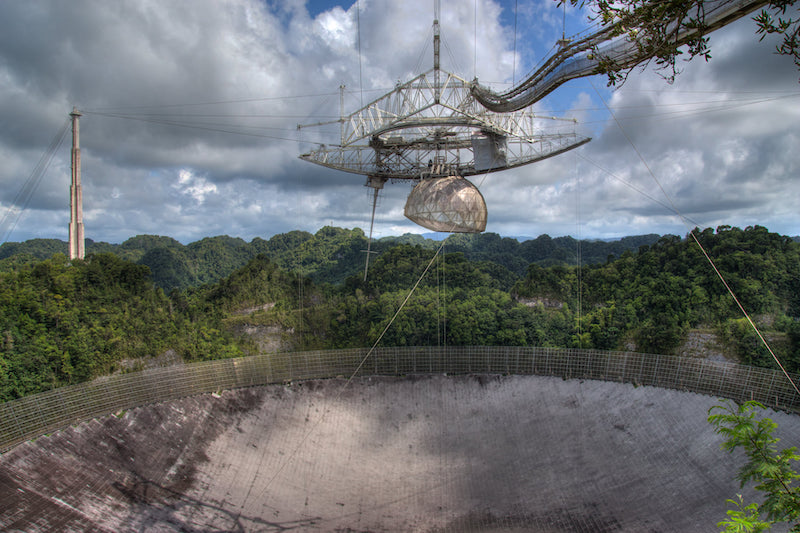 The 305-meter (1000-foot) dish and receiver assembly of the previous largest single-dish telescope in the world, Arecibo in Puerto Rico, a few years before it collapsed. Image by Theresa Wiegert.

Bottom line: FAST, located in southwestern China, is the world’s largest single-dish radio observatory with its 500-meter (1640-foot) diameter. It is now fully operational and has started receiving observation proposals from international astronomers as of 2021.