Heartbreaking news. After 57 years as a world-class resource for astronomy, the iconic Arecibo telescope is to be decommissioned, or withdrawn from service, the NSF announced today. The dish-type radio telescope – built into a natural depression in the landscape in Puerto Rico – appears to be headed for a “controlled disassembly.” 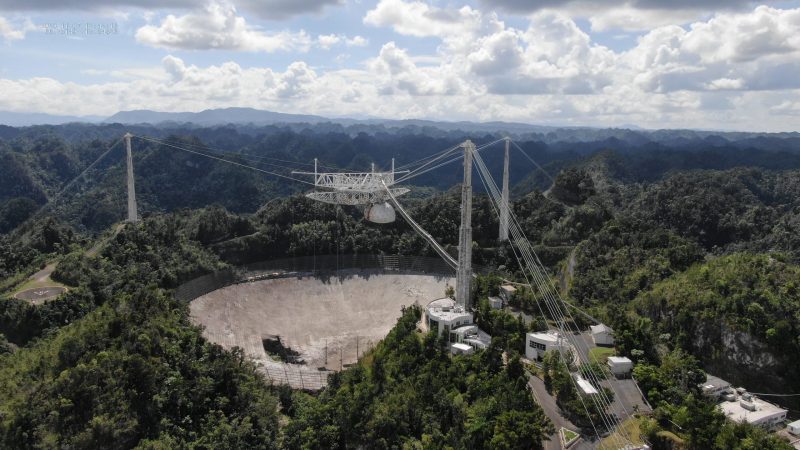 The following is a statement from the U.S. National Science Foundation, issued November 19, 2020:

Following a review of engineering assessments that found damage to the Arecibo Observatory cannot be stabilized without risk to construction workers and staff at the facility, the U.S. National Science Foundation (NSF) will begin plans to decommission the 305-meter (1,000 foot) telescope, which for 57 years has served as a world-class resource for radio astronomy, planetary, solar system and geospace research.

The decision comes after NSF evaluated multiple assessments by independent engineering companies that found the telescope structure is in danger of a catastrophic failure and its cables may no longer be capable of carrying the loads they were designed to support. Furthermore, several assessments stated that any attempts at repairs could put workers in potentially life-threatening danger. Even in the event of repairs going forward, engineers found that the structure would likely present long-term stability issues.

‘NSF prioritizes the safety of workers, Arecibo Observatory’s staff and visitors, which makes this decision necessary, although unfortunate,’ said NSF Director Sethuraman Panchanathan. ‘For nearly six decades, the Arecibo Observatory has served as a beacon for breakthrough science and what a partnership with a community can look like. While this is a profound change, we will be looking for ways to assist the scientific community and maintain that strong relationship with the people of Puerto Rico.’

Engineers have been examining the Arecibo Observatory 305-meter telescope since August, when one of its support cables detached. NSF authorized the University of Central Florida, which manages Arecibo, to take all reasonable steps and use available funds to address the situation while ensuring safety remained the highest priority. UCF acted quickly, and the evaluation process was following its expected timeline, considering the age of the facility, the complexity of the design and the potential risk to workers.

The engineering teams had designed and were ready to implement emergency structural stabilization of the auxiliary cable system. While the observatory was arranging for delivery of two replacement auxiliary cables, as well as two temporary cables, a main cable broke on the same tower Nov. 6. Based on the stresses on the second broken cable – which should have been well within its ability to function without breaking – engineers concluded that the remaining cables are likely weaker than originally projected.

‘Leadership at Arecibo Observatory and UCF did a commendable job addressing this situation, acting quickly and pursuing every possible option to save this incredible instrument,’ said Ralph Gaume, director of NSF’s Division of Astronomical Sciences. ‘Until these assessments came in, our question was not if the observatory should be repaired but how. But in the end, a preponderance of data showed that we simply could not do this safely. And that is a line we cannot cross.’

NSF’s first priority is safety. Multiple assessments by independent engineering companies found the telescope structure is in danger of a catastrophic failure and its cables may no longer be capable of carrying the loads they were designed to support. https://t.co/En0S7OOhY4

The scope of NSF’s decommissioning plan would focus only on the 305-meter telescope and is intended to safely preserve other parts of the observatory that could be damaged or destroyed in the event of an unplanned, catastrophic collapse. The plan aims to retain as much as possible of the remaining infrastructure of Arecibo Observatory, so that it remains available for future research and educational missions.

The decommissioning process involves developing a technical execution plan and ensuring compliance with a series of legal, environmental, safety and cultural requirements over the coming weeks. NSF has authorized a high-resolution photographic survey using drones, and is considering options for forensic evaluation of the broken cable – if such action could be done safely – to see if any new evidence could inform the ongoing plans. This work has already begun and will continue throughout the decommissioning planning. Equipment and other materials will be temporarily moved to buildings outside the danger zone. When all necessary preparations have been made, the telescope would be subject to a controlled disassembly.

Scientists at Arecibo conducted Nobel Prize winning research on the potential of other habitable planets. Earlier this month one of the massive steel support cables snapped and damaged the 1,000- foot-wide reflector dish. pic.twitter.com/tjFQYlwakM

After the telescope decommissioning, NSF would intend to restore operations at assets such as the Arecibo Observatory LIDAR facility – a valuable geospace research tool – as well as at the visitor center and offsite Culebra facility, which analyzes cloud cover and precipitation data. NSF would also seek to explore possibilities for expanding the educational capacities of the learning center. Safety precautions due to the COVID-19 pandemic will remain in place as appropriate.

Some Arecibo operations involving the analysis and cataloging of archived data collected by the telescope would continue. UCF secured enhanced cloud storage and analytics capabilities in 2019 through an agreement with Microsoft, and the observatory is working to migrate on-site data to servers outside of the affected area.

Areas of the observatory that could be affected by an uncontrolled collapse have been evacuated since the November cable break and will remain closed to unauthorized personnel during the decommissioning. NSF and UCF will work to minimize risk in the area in the event of an unexpected collapse. NSF has prioritized a swift, thorough process with the intent of avoiding such an event.

The first I heard about Arecibo, I was a kid. It was through this shot from the @thexfiles. @davidduchovny
investigating mysterious radio signals. Sad to think it's gone. pic.twitter.com/KrtknNUTf3

NSF recognizes the cultural and economic significance of Arecibo Observatory to Puerto Rico, and how the telescope serves as an inspiration for Puerto Ricans considering education and employment in STEM. NSF’s goal is to work with the Puerto Rican government and other stakeholders and partners to explore the possibility of applying resources from Arecibo Observatory for educational purposes.

‘Over its lifetime, Arecibo Observatory has helped transform our understanding of the ionosphere, showing us how density, composition and other factors interact to shape this critical region where Earth’s atmosphere meets space,’ said Michael Wiltberger, head of NSF’s Geospace Section. ‘While I am disappointed by the loss of investigative capabilities, I believe this process is a necessary step to preserve the research community’s ability to use Arecibo Observatory’s other assets and hopefully ensure that important work can continue at the facility.’

In college, I was fortunate to spend many months doing research at the Arecibo Observatory—a special place that inspired many young people (including me) to pursue careers in science.

It also led me to meet my wife, who also began her research career there. pic.twitter.com/ztgq2wnxle

Arecibo Observatory’s telescope consists of a radio dish 1,000 feet (305 meters) wide in diameter with a 900-ton instrument platform hanging 450 feet (137 meters) above. The platform is suspended by cables connected to three towers.

On August 10, 2020, an auxiliary cable failed, slipping from its socket in one of the towers and leaving a 100-foot (30 meter) gash in the dish below. NSF authorized Arecibo Observatory to take all reasonable steps and use available funds, which amounted to millions of dollars, to secure the analysis and equipment needed to address the situation. Engineers were working to determine how to repair the damage and determine the integrity of the structure when a main cable connected to the same tower broke Nov. 6.

The second broken cable was unexpected – engineering assessments following the auxiliary cable failure indicated the structure was stable and the planning process to restore the telescope to operation was underway. Engineers subsequently found this 3-inch (7.6 cm) main cable snapped at about 60% of what should have been its minimum breaking strength during a period of calm weather, raising the possibility of other cables being weaker than expected.

Inspections of the other cables revealed new wire breaks on some of the main cables, which were original to the structure, and evidence of significant slippage at several sockets holding the remaining auxiliary cables, which were added during a refit in the 1990s that added weight to the instrument platform.

RIP Arecibo :'( Good memories from this amazing telescope, which has been going strong for 57 years (photos from 2013)….

Thornton Tomasetti, the engineering firm of record hired by UCF to assess the structure, found that given the likelihood of another cable failing, repair work on the telescope – including mitigation measures to stabilize it for additional work – would be unsafe. Stress tests to capture a more accurate measure of the remaining cables’ strength could collapse the structure, Thornton Tomasetti found. The firm recommended a controlled demolition to eliminate the danger of an unexpected collapse.

‘Although it saddens us to make this recommendation, we believe the structure should be demolished in a controlled way as soon as pragmatically possible,’ said the recommendation for action letter submitted by Thornton Tomasetti. ‘It is therefore our recommendation to expeditiously plan for decommissioning of the observatory and execute a controlled demolition of the telescope.’

UCF also hired two other engineering firms to provide assessments of the situation. One recommended immediate stabilization action. The other, after reviewing Thornton Tomasetti’s model, concurred that there is no course of action that could safely verify the structure’s stability and advised against allowing personnel on the telescope’s platforms or towers.

‘Critical work remains to be done in the area of atmospheric sciences, planetary sciences, radio astronomy and radar astronomy,’ UCF President Alexander N. Cartwright said. ‘UCF stands ready to utilize its experience with the observatory to join other stakeholders in pursuing the kind of commitment and funding needed to continue and build on Arecibo’s contributions to science.’

After receiving the contracted assessments, NSF brought in an independent engineering firm and the Army Corps of Engineers to review the findings. The firm NSF hired concurred with the recommendations of Thornton Tomasetti and expressed concern about significant danger from uncontrolled collapse. The Army Corps of Engineers recommended gathering additional photographic evidence of the facility and a complete forensic evaluation of the broken cable.

Given the fact that any stabilization or repair scenario would require workers to be on or near the telescope structure, the degree of uncertainty about the cables’ strength and the extreme forces at work, NSF accepted the recommendation to prepare for controlled decommissioning of the 305-meter telescope.

I'm really bummed about #Arecibo Closing. I understand why, but to me it was always an iconic space telescope that was immediately recognized and known about when people talked about Astronomy.
It helped that the movie Contact made it well known.
RIP old girl.
You did good.

Bottom line: The National Science Foundation announced on November 19, 2020, that the big-dish Arecibo telescope in Puerto Rico is to be dismantled, following engineering reports suggesting it is unsafe, due to damage from hurricanes and other factors.