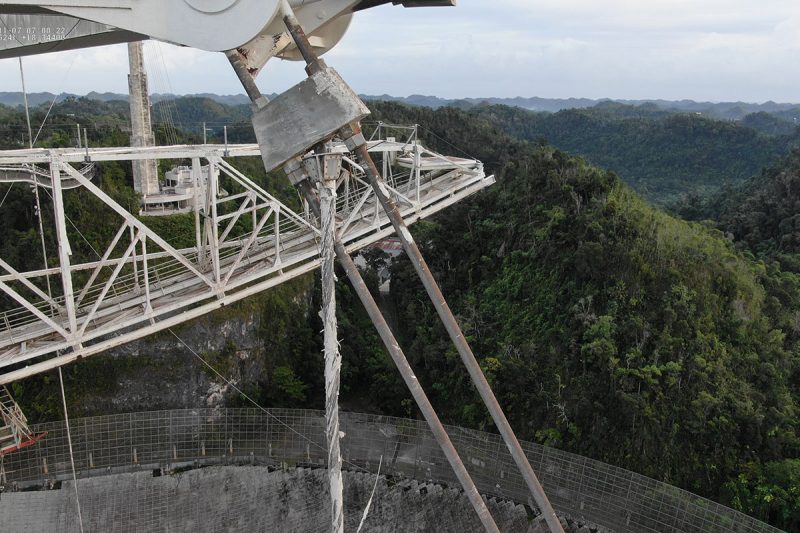 Photo taken via drone of the Arecibo Observatory after a main cable broke on November 6, 2020. Image via University of Central Florida.

Iconic Arecibo Observatory in Puerto Rico underwent major structural damage last August, caused by a broken lashing cable. The injury to the telescope was a bitter disappointment, especially since the observatory had recently received two large grants – one for emergency supplemental funds for upgrades and repairs to the big Arecibo radio dish, needed due to damage from Hurricanes Irma and Maria in 2017 – and the other to allow the observatory to continue to find and study near-Earth asteroids. Last week (November 13, 2020), the University of Central Florida – which manages the observatory – reported to the U.S. National Science Foundation on a second cable failure that occurred earlier this month, on November 6, and on engineering options at this time. The news is worrisome. The statement said:

A main cable failed at Arecibo Observatory about 7:30 pm on November 6. Safety remains the team’s primary concern, so a safety zone has been set up around the reflector dish and only personnel needed to respond to the incident are allowed onsite. The Arecibo Observatory management team began immediately working to assess the new break with the three engineering firms – Thornton Tomasetti, WSP, and WJE (Wiss, Janney, and Elstner Associates) – that were hired in connection with an auxiliary cable break that occurred on August 10.

The goal was to determine the cause of the second break and how to stabilize the structure while minimizing risk to personnel, including those who would be making any repairs. NSF, the owner of the facility, was also notified and has been frequently briefed as assessments continued all week.

The firms have been working around the clock since November 6. A monitoring team has been closely watching all the cables and platform. Drones and remote cameras are being used to minimize risk.

Preliminary analysis indicates the main cable, which failed on November 6, should have easily handled the extra load based on design capacity. Engineers suspect it is likely that the second cable failed because it has degraded over time and has been carrying extra load since August. A final determination could not be made without retrieving and analyzing the second cable.

The engineering firms cannot verify the integrity of the other cables at this time supporting the 900-ton platform. Each of the structure’s remaining cables is now supporting more weight than before, increasing the likelihood of another cable failure, which would likely result in the collapse of the entire structure.

Other wire breaks on two of the remaining main cables have also been observed. The situation is dynamic and poses a serious safety risk to employees and contractors. As a result, project leaders are not only working vigorously to understand why this industrial failure occurred, but also to share these findings in a timely and transparent manner with the NSF and all interested parties.

The 2021 lunar calendars are here. Order yours before they’re gone. Makes a great gift. 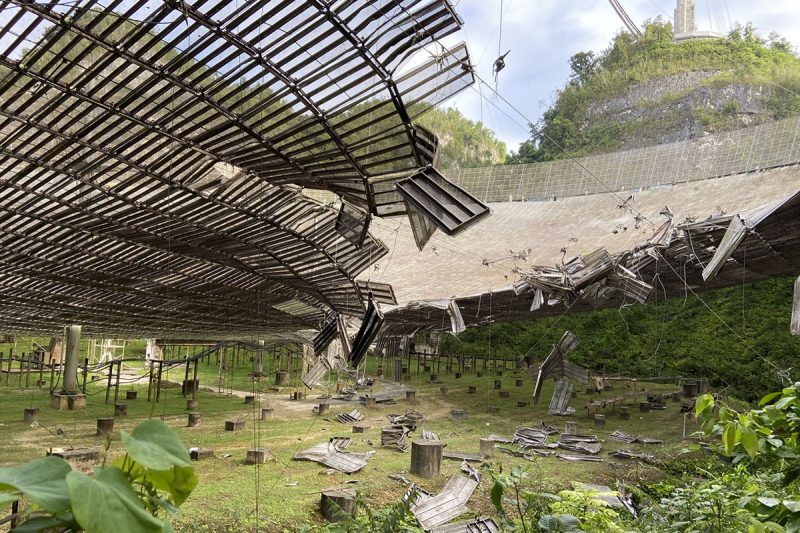 Some of the damages caused by a broken supporting cable on the 1,000-foot (305 m) Arecibo radio dish. The cable broke on Monday, August 10, 2020. Image via University of Central Florida.

Bottom line: A lashing cable broke at Arecibo Observatory in August 2020. It happened while repairs from Hurricane Maria (2017) were still ongoing. A second cable failed on November 6, 2020. Engineers suspect it failed because it has been carrying extra load since August. The engineering firms cannot verify the integrity of the other cables at this time.