New video shows Arecibo’s receiver platform breaking loose and falling onto the radio telescope dish 400 feet below. No one was injured.

Update: The National Science Foundation has released video of the iconic radio telescope’s final minutes as the receiver snapped loose and fell.

The famous Arecibo telescope in Puerto Rico has now undergone a much-dreaded collapse. The Associated Press reported on December 1, 2020:

The telescope’s 900-ton receiver platform fell onto the reflector dish more than 400 feet [120 meters] below.

It sounded like a rumble. I knew exactly what it was. I was screaming. Personally, I was out of control … I don’t have words to express it. It’s a very deep, terrible feeling.

Dennis Vazquez via Facebook: He took these pictures of the collapse of the Arecibo Observatory. You can see the debris and the remains of the platform and the Gregorian Dome. pic.twitter.com/xneOGSVFYi 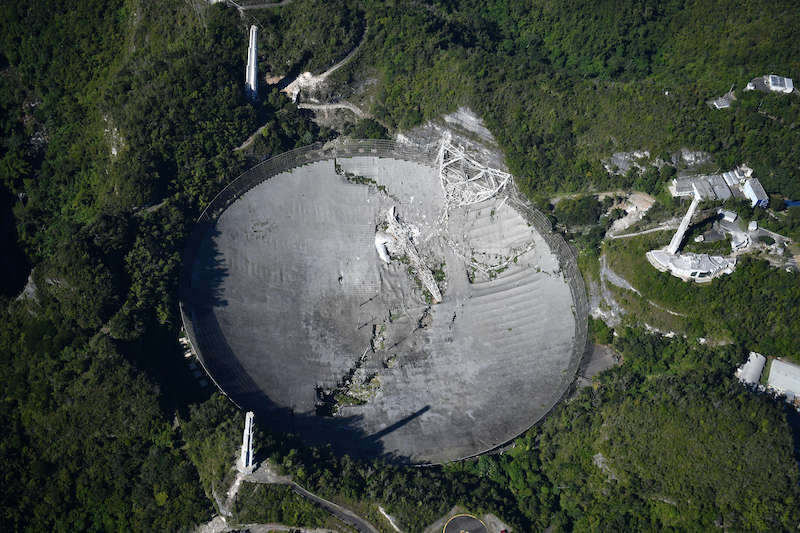 The 900-ton (1.8 million pounds) receiver assembly of the Arecibo telescope in Puerto Rico collapsed onto the 305 meter (1000 feet) primary dish on the morning of December 1, 2020. Image via Juan R. Costa/ NotiCel.

The collapse came two weeks after the U.S. National Science Foundation announced that safety in and around the telescope could no longer be guaranteed and thus that Arecibo would be closed and dismantled. That decision came after NSF evaluated multiple assessments by independent engineering companies suggesting that the telescope structure was in danger of a “catastrophic failure” and that, according to NSF:

… its cables may no longer be capable of carrying the loads they were designed to support.

Engineers had been examining Arecibo – which is a big-dish type of radio telescope built into a natural depression in the landscape of Puerto Rico – since August 2020. That is when one of its support cables detached. A second cable broke on November 6. NSF authorized the University of Central Florida, which manages Arecibo, to:

… take all reasonable steps and use available funds to address the situation while ensuring safety remained the highest priority. UCF acted quickly, and the evaluation process was following its expected timeline, considering the age of the facility, the complexity of the design and the potential risk to workers.

The instrument platform of the 305m telescope at Arecibo Observatory in Puerto Rico fell overnight. No injuries were reported. NSF is working with stakeholders to assess the situation. Our top priority is maintaining safety. NSF will release more details when they are confirmed. pic.twitter.com/Xjbb9hPUgD

The November 19, 2020, announcement that Arecibo would be decommissioned sent up an outcry in the world of astronomy, which has relied on the iconic telescope since it was built in 1963 with money from the U.S. Defense Department. AP reported:

Scientists worldwide had been petitioning U.S. officials and others to reverse the NSF’s decision to close the observatory. The NSF said at the time that it intended to eventually reopen the visitor center and restore operations at the observatory’s remaining assets, including its two LIDAR facilities used for upper atmospheric and ionospheric research, including analyzing cloud cover and precipitation data.

Arecibo has been featured in many books and movies, most notably, perhaps, in the movie “Contact,” based on the Carl Sagan novel about a first contact with an extraterrestrial civilization. Now – for all who have visited Arecibo, worked there, or marveled at it via multiple mentions in popular culture – it’s a sad day.

Bottom line: Video of the collapse of the Arecibo Observatory in Puerto Rico shows the 900-ton receiver platform coming loose from its cables and falling onto the reflector dish more than 400 feet (120 meters) below.