How many unseen worlds orbit these stars? The TESS planet-hunter is designed to find nearby exoplanets, between 30 and 300 light-years away. 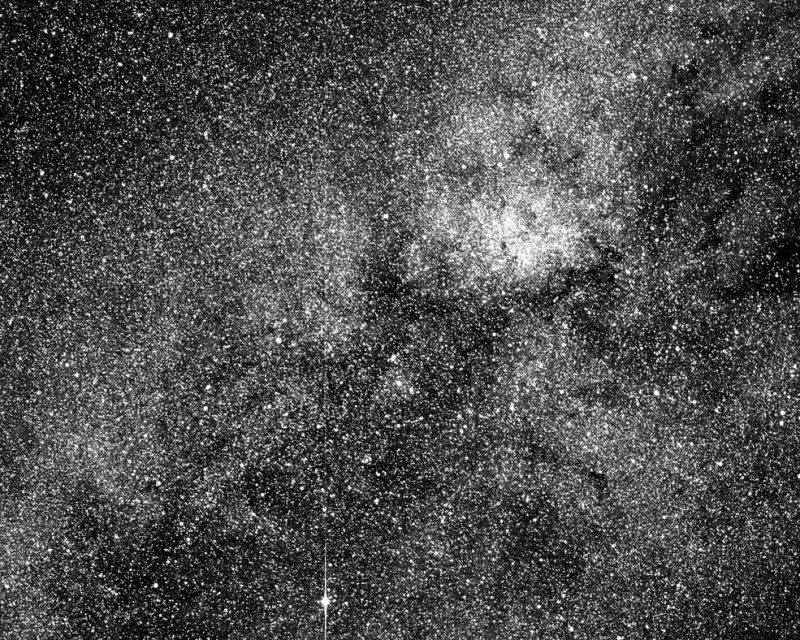 This is the 1st test image from the newly launched TESS planet-hunter, showing a swath of the southern sky along the plane of our Milky Way galaxy. The edge of the Coalsack Nebula is in the right upper corner and the bright star Beta Centauri is visible at the lower left edge. TESS is expected to cover more than 400 times as much sky as shown in this image with its 4 cameras during its initial 2-year search for exoplanets. Image via NASA/MIT/TESS.

NASA’s new planet hunter, the Transiting Exoplanet Survey Satellite – aka TESS – completed a successful lunar flyby on May 17, 2018. The flyby took place almost one month to the day after the craft’s April 18 launch from the Cape Canaveral Air Force Station in Florida. TESS swept about 5,000 miles (8,000 km) from the moon’s surface, in the process receiving a gravity boost from the moon that’ll help the craft achieve its final working orbit. In addition, the TESS science team used one of the spacecraft’s four cameras to snap a two-second test image (shown above), centered on the southern constellation Centaurus and showing more than 200,000 stars.

How many unseen worlds orbit these stars? TESS won’t probe them all (it’s designed for nearby stars), but it’ll find some of them!

Since its April 18 launch, TESS has undergone five of six scheduled thruster burns. It has traveled in a series of progressively more elongated orbits to reach the moon. NASA said TESS will undergo a final thruster burn on May 30 to enter its 13.7-day science orbit around Earth. The highly elliptical final orbit is designed to maximize the amount of sky the spacecraft can image.

NASA is expected to release the science-quality image from TESS – the spacecraft’s official first light image – in June. TESS is expected to begin science operations in mid-June.

TESS is the successor to the Kepler spacecraft, which discovered some 2,300 exoplanets over the course of its lifetime. NASA said in March that Kepler is expected to run out of fuel entirely within the next few months.

Unlike Kepler – which has a fixed field of view of the sky – TESS will search for exoplanets in some 85 percent of Earth’s sky. Scientists have divided the sky into 26 sectors. TESS will use its four wide-field cameras to map 13 sectors encompassing the southern sky during its first year of observations and 13 sectors of the northern sky during the second year.

TESS will be watching for phenomena called transits. A transit occurs when a planet passes in front of its star from the observer’s perspective, causing a periodic and regular dip in the star’s brightness. More than 78 percent of the confirmed exoplanets – including those found by Kepler – have been found using transits, NASA said.

Most of Kepler’s exoplanets orbit faint stars between 300 and 3,000 light-years from Earth. TESS will focus on much closer stars – between 30 and 300 light-years away – and some 30 to 100 times brighter than Kepler’s targets.

The brightness of these target stars will allow future researchers to use spectroscopy, the study of the absorption and emission of light, to determine a planet’s mass, density and atmospheric composition. Water, and other key molecules, in its atmosphere can give us hints about a planet’s capacity to harbor life.

Read more: How TESS will hunt for alien worlds 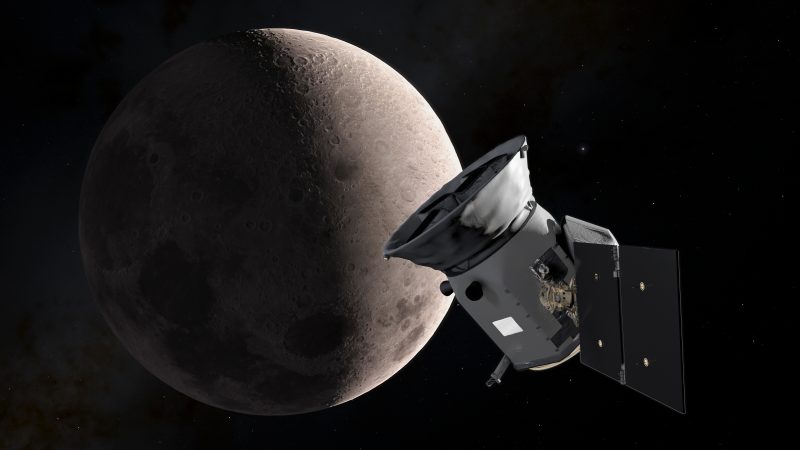 Artist’s concept of the Transiting Exoplanet Survey Satellite – TESS – which successfully completing a lunar flyby on May 17, 2018. The spacecraft passed about 5,000 miles (8,000 km) from the moon, which provided a gravitational assist that helped TESS sail toward its final working orbit. Image via NASA/NASA Goddard Space Flight Center

Bottom line: The Transiting Exoplanet Survey Satellite – aka TESS – completed a successful lunar flyby on May 17, 2018, sweeping about 5,000 miles (8,000 km) from the moon’s surface. In the process, it received a gravity boost from the moon that’ll help the craft achieve its final working orbit. In addition, the TESS science team acquired a test image (top of page).