Beta Centauri isn’t as famous as Alpha Centauri, but together, these brilliant Southern Hemisphere stars have inspired legends and guided mariners. 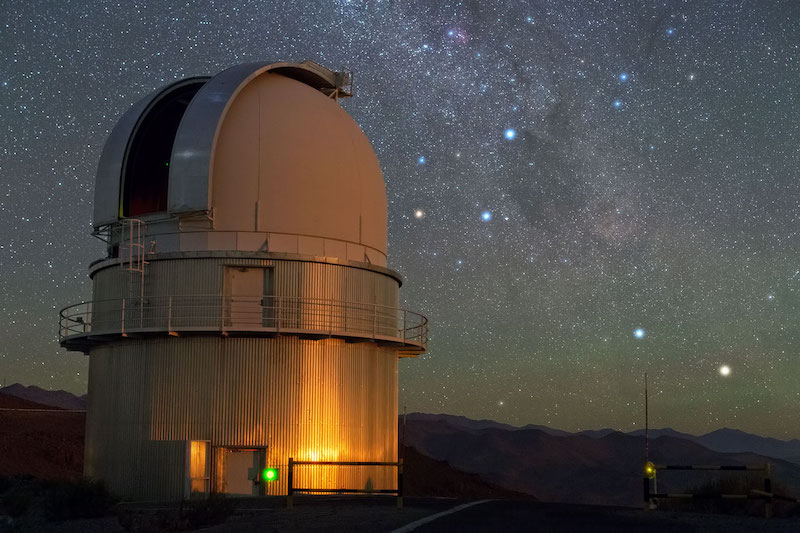 In this image taken at the European Southern Observatory’s La Silla Observatory in Chile, the Southern Cross is clearly visible, with the yellowish star, closest to the dome, marking the top of the cross. Drawing a line downward through the crossbar stars takes you to the bluish star, Beta Centauri, and then to the yellowish Alpha Centauri. Image via ESO / Wikimedia Commons.

To stargazers, Beta Centauri and its brighter neighbor Alpha Centauri are known as “pointers” to the Southern Cross. They’re also prominently featured in the astronomical lore of many cultures.

Beta Centauri science. In 1935, Dutch astronomer Joan Voûte was able to resolve Beta Centauri into two stars, using a telescope. At the time, the stars were 1.1 arc seconds apart. That separation has since narrowed to about 0.3 arc seconds, requiring specialized imaging techniques to see the faint companion.

The brighter star is known as Beta Centauri A. More about it later. Its faint companion, Beta Centauri B, is a small hot 4th magnitude star, about 4.5 times the sun’s mass. New observations will be needed over the next decade to better characterize their orbit; according to an article published in 2018, the Beta Centauri A and B orbital period is thought to be somewhere between 125 to 250 years. 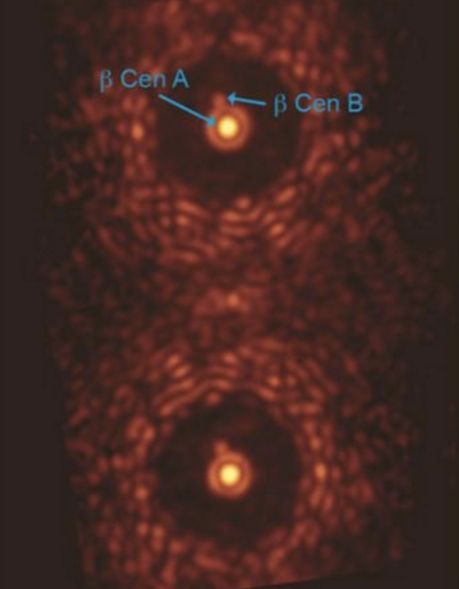 This is a double image of the star Beta Centauri taken through an experimental coronagraph. Both images of the star contain a dark region that covers the complete 360° around the central star. In both cases, the binary companion to Beta Centauri is easily detected. Image via EurekAlert/ Leiden University/ University of Arizona.

In 1999, spectroscopic observations confirmed what astronomers had long suspected: Beta Centauri A is a close binary star system. The more massive star of the pair, designated as Beta Centauri Aa, is about 12 times the mass of the sun while its companion, Beta Centauri Ab is about 10.5 times the sun’s mass. They orbit about a common center of mass every 357 days, coming as close as 3 astronomical units to each other.

The Beta Centauri A stars are what’s known as B1 III stars; that’s a stellar classification code that indicates that they are bright hot blue giant stars entering the latter stages of their stellar lifetime. Such massive stars tend to be short-lived, compared to lower mass stars like the sun. These giant stars “burn” furiously, spending less time in a relatively stable state called the main sequence, where outward radiation pressure from the star’s hot interior is balanced by the inward force of the star’s gravity.

It’s likely that the Beta Centauri A stars will someday explode as supernovae, each leaving behind a dense neutron star. It won’t happen for tens of millions of years, but when it does, these supernovae are close enough that they’ll be visible during the daytime.

How to see Beta Centauri. Alpha and Beta Centauri are the brightest stars in the fairly large and sprawling constellation of Centaurus the Centaur. Both are near the famed Southern Cross (also called Crux), and are roughly 30 degrees from the south celestial pole. They’re sometimes called the Southern Pointer Stars because they point to the Southern Cross. 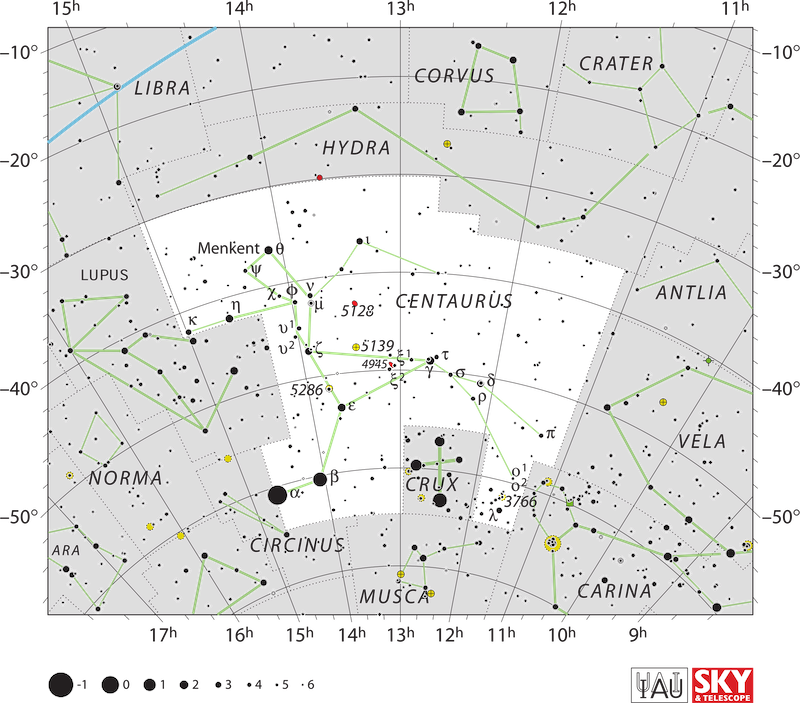 Alas, neither Alpha Centauri nor Beta Centauri can be seen at all in the U.S., except very briefly from South Texas, parts of Florida, and Hawaii.

For Northern Hemisphere observers, there really are no good pointer stars to Alpha and Beta Centauri. If you live far enough south to see them, you will need to look for them low on the southern horizon at exactly the right time. That right time might come, for example, at roughly 1 a.m. (local daylight saving time) in early May. By early July, Beta Centauri culminates (reaches its highest point) in the south by nightfall. It also can be seen briefly in the predawn spring skies.

Meanwhile, from the Southern Hemisphere, Beta Centauri is quite prominent. It is very bright (magnitude 0.61) with a bluish color. It’s also close to Alpha Centauri, the third brightest star in the night sky.

Beta Centauri in mythology. For the Ngarrindjeri indigenous people of South Australia, Alpha and Beta Centauri were two sharks pursuing a sting ray represented by stars of the Southern Cross. To the Boorong of northwestern Victoria, Australia, the two stars were brothers that killed Tchingal, the Emu, represented in the sky by the Coalsack Nebula.

Ancient seafaring Polynesians navigated using the stars, with cues from nature such as bird movements, waves, and wind direction. Alpha Centauri and Beta Centauri, known as Kamailehope and Kamailemua, respectively, were important signposts used for orientation in the open ocean.

To the Incas, Alpha Centauri and Beta Centauri were the eyes of a giant llama sprawled across the sky from Scorpius to the Southern Cross. In Africa, they were named for two men who once were lions. At one time in China they were known, according to Richard Hinckley Allen, who wrote the classic book Star Names: Their Lore and Meaning, as Ma Wei, the Horse’s Tail.

A plaque at the Coricancha museum showing Inca constellations. Coricancha, located in Cusco, Peru, was perhaps the most important temple of the Inca empire. Image via Pi3.124 / Wikimedia Commons.

Beta Centauri’s proper name is Hadar; it apparently derives from an Arabic word for ground, possibly referring to its nearness to the horizon as seen from low latitudes. The star is sometimes known as Agena (derived from Latin words for the knee), referring to the star’s position at the left knee of the Centaur in its classical depiction.

The Centaur itself was supposed to be the son of the god Chronos and a sea nymph. Uncharacteristically wise and just, this centaur, often known as Chiron, was a favorite of Apollo and Diana and figures in some minor mythology of its own. 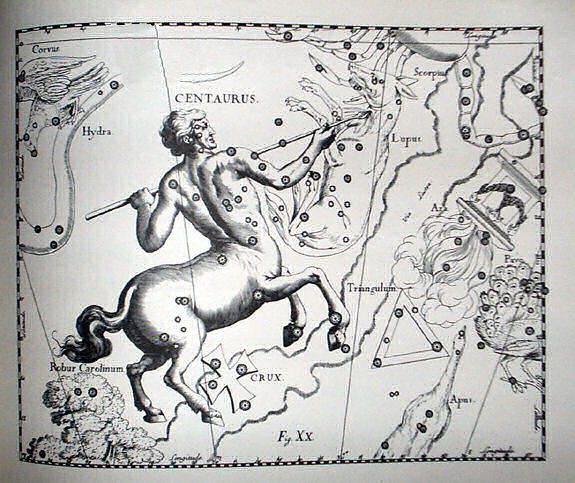 A depiction of the Centaur by Polish astronomer Johannes Hevelius in his atlas of constellations Firmamentum Sobiescianum, sive Uranographia. Image via Wikimedia Commons. 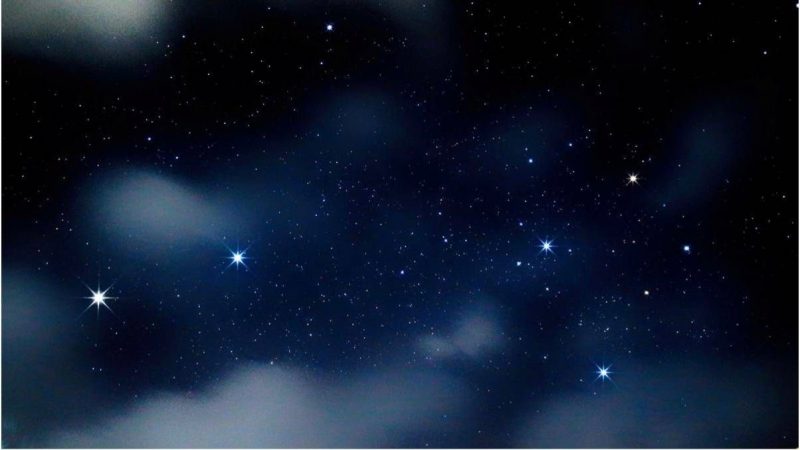 View at EarthSky Community Photos. | Dr Ski in Valencia, Philippines, captured the Southern Pointer Stars – Alpha Centauri (far left) and Beta Centauri – aimed at Crux, aka the Southern Cross. He wrote: “When you see the Southern Cross for the first time, you understand now why you came this way. – CS&N.” Thanks, Dr Ski!

Bottom line: Beta Centauri, also called as Hadar, is a triple star system. It is known, along with its nearby neighbor Alpha Centauri, as a pointer to the Southern Cross.