How to see the Southern Cross from the Northern Hemisphere 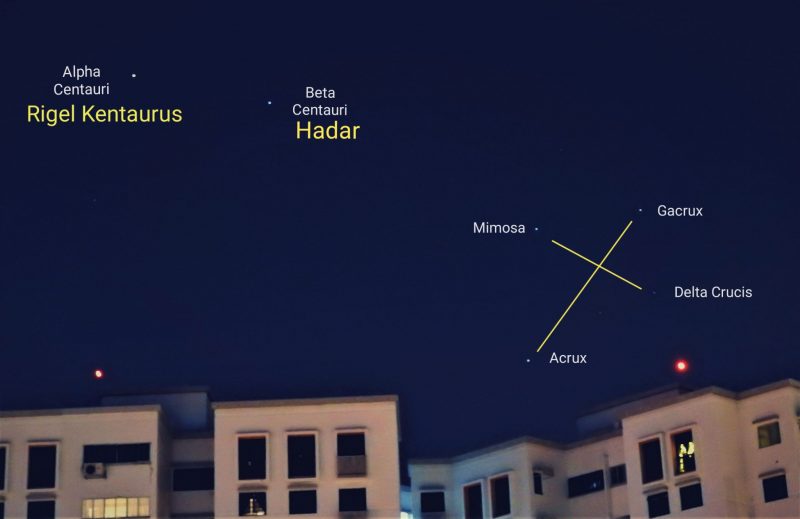 View at EarthSky Community Photos. | Kannan A in Woodlands, Singapore, captured this photo of the Southern Cross on March 8, 2021. He wrote: “The Southern Cross constellation seen here in the morning in Singapore looking south. On the left of this cross are the 2 pointer stars, Alpha Centauri (Rigel Kentaurus) and Beta Centauri (Hadar). They point to the Southern Cross.” Thanks, Kannan!

The Southern Cross – also known as Crux – is an iconic constellation for people south of the equator. It’s visible every clear night, and its stars shine brightly enough to be picked out pretty easily even from urban locations.

If you’re in the Northern Hemisphere, you too can see the famous Southern Cross, if you’re far enough south, and know where and when to look. 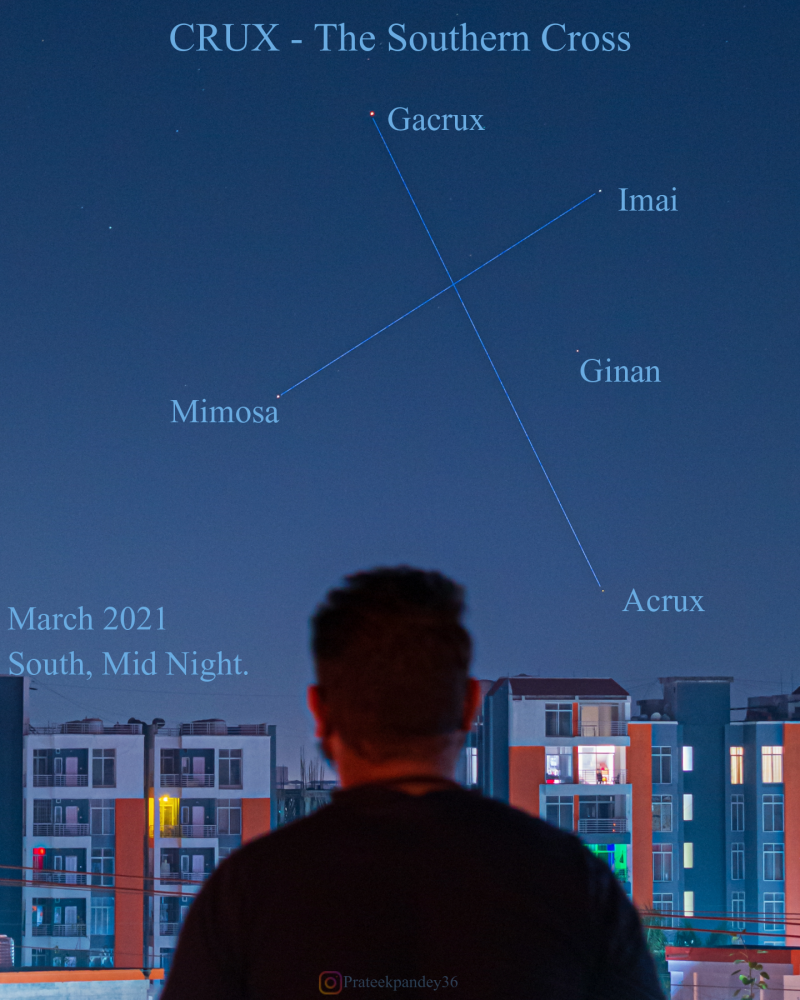 However, for much of the Northern Hemisphere – including most of the United States – the Southern Cross never rises above the horizon, so it can never been seen from our middle and far northern skies.

You can see see all of Crux from the U.S. state of Hawaii. In the contiguous U.S., you need to be in southern Florida or Texas (about 26 degrees north latitude or farther south). Even from the far-southern contiguous U.S., you have a limited viewing window for catching the Southern Cross. It has to be the right season of the year. It has to be the right time of night. And you have to look in the right direction: south!

For the Northern Hemisphere’s tropical and subtropical regions, the month of May is a good time for finding Crux in the evening sky. You can see the Southern Cross at other times of the year, but not at such a convenient time. In middle March, for instance, you have to wait till about 1 a.m. to catch the Southern Cross at its highest point in the sky. In December and January you have to catch Crux before dawn.

No matter the hour or date, the Southern Cross climbs to its highest point in the sky when it’s due south. The Cross is fairly easy to visualize, because it stands upright over the horizon. 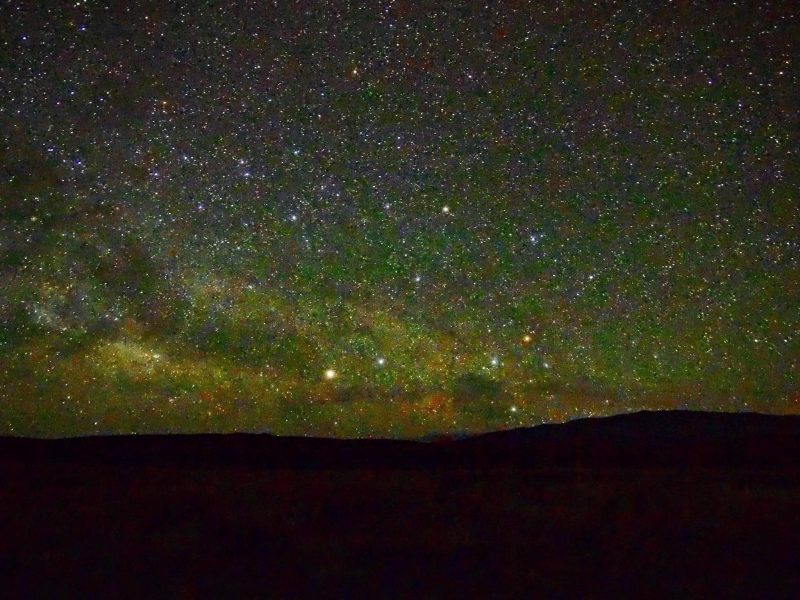 Bright stars Alpha and Beta Centauri pointing to Crux, or the Southern Cross, from Stephen Green in Waikoloa, Hawaii, on April 26, 2019. Stephen is at about 20 degrees north latitude. Thank you, Stephen!

The Big Dipper soars highest in the sky on late northern spring evenings. When the Big Dipper is seen above Polaris, the North Star, the Southern Cross is seen standing over the southern horizon in southern Florida and Texas. 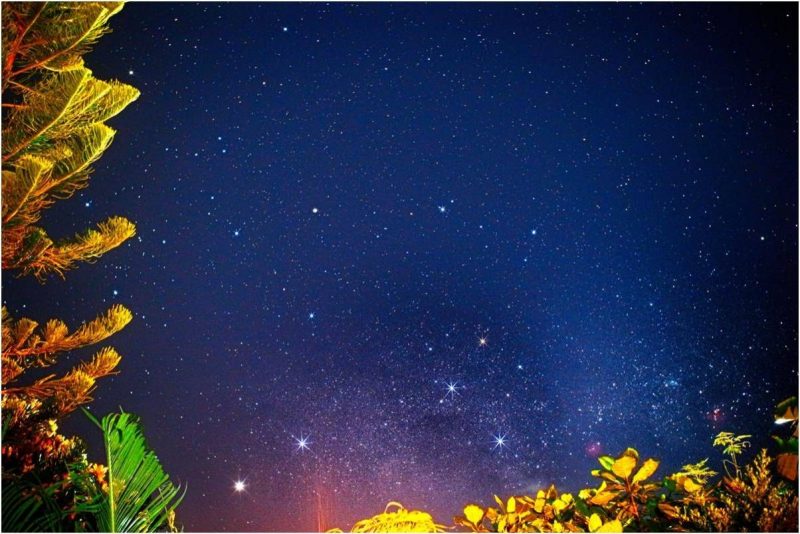 Dr Ski in Valencia, Philippines – 7 degrees north latitude – captured this image on April 30, 2019. He wrote: “The Southern Cross transits the meridian (reaches its highest point). The top of the Cross (Gamma Crux) is 24 degrees above my horizon when it culminates. Alpha and Beta Centauri are the bright stars at the lower left, pointing to the Cross.” Thank you, Dr Ski!

Southern Cross in navigation. When European sailors journeyed south of the equator, they found that the North Star had disappeared below the horizon. As they sailed even farther south, the Big Dipper dropped out of sight as well. Unlike the Northern Hemisphere, the Southern Hemisphere has no bright pole star to highlight the celestial pole. Fortunately, the Southern Cross acts as a navigational aid.

There are various ways to find the direction due south using the Southern Cross as a guide. For example, a line drawn from the star Gacrux through the star Acrux points in the general direction of the south celestial pole (the point in the sky directly above the Earth’s south pole).

Read more: How to use the Southern Cross to locate the direction south 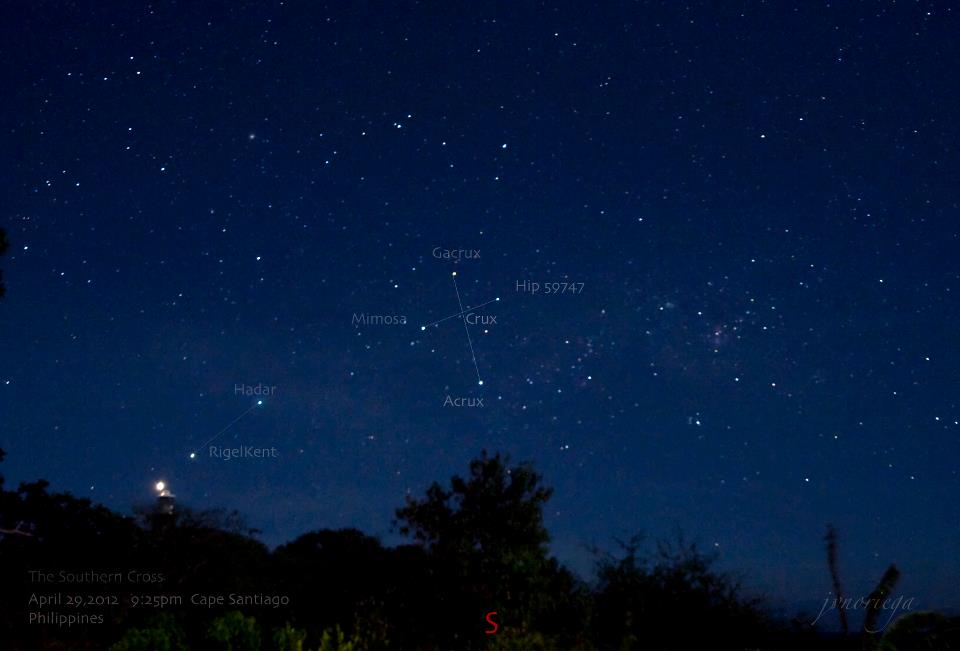 View larger. | Here is the Southern Cross as seen from Manila – at 14 degrees north latitude – on April 29, 2012. Image via our friend JV Noriega.

Bottom line: The Southern Cross can be seen by northerners, as long as you’re below 26 degrees north and know where and when to look!