As wide as 2 Earths – like nothing seen on any other world – Saturn’s hexagon was thought to be a feature of the lower atmosphere, where Saturn’s weather happens. Now there’s evidence it extends high above the cloudtops. 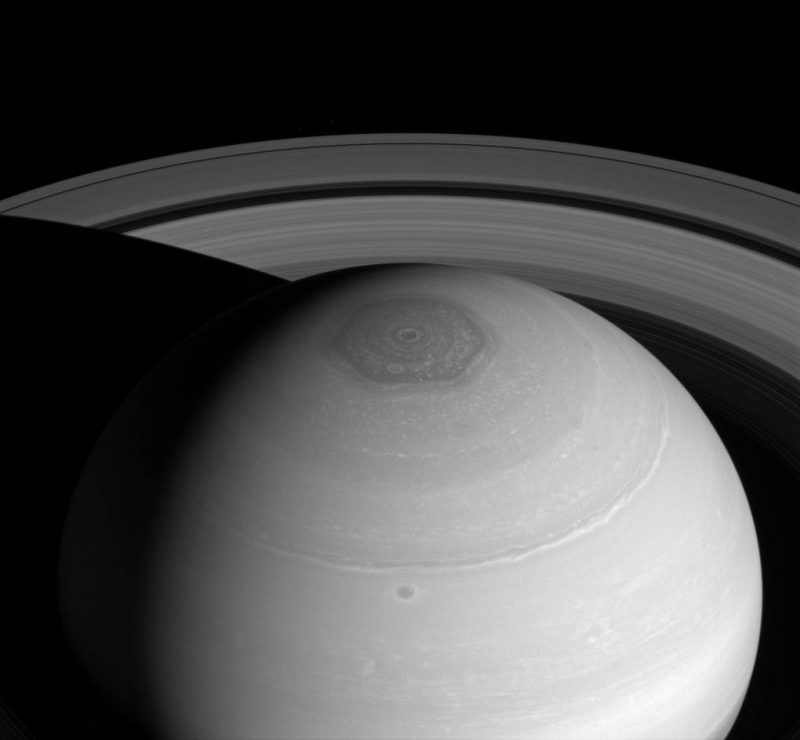 The Cassini spacecraft used its wide-angle camera to capture this image of the ringed planet Saturn on April 2, 2014. You can see Saturn’s hexagon – an odd six-sided feature – surrounding its circular north polar vortex. Image via NASA.

Space scientists have been fascinated by the hexagonal feature at Saturn’s north pole since the Voyager mission first discovered it in 1981. The hexagon – a jet stream in Saturn’s atmosphere, moving at some 200 mph (320 km/h) — was believed to be a feature of Saturn’s lower atmosphere, or troposphere, only. Now, however, as the seasons have passed on Saturn, this bizarre hexagon – which is wider than two Earths – appears to have changed. Writing in the peer-reviewed journal Nature Communications on September 3, 2018, scientists said they now have evidence that the hexagon extends to about 180 miles (300 km) above Saturn’s cloudtops, up into this world’s stratosphere, at least during Saturn’s northern spring and summer.

The new work is a long-term study, using data from the Cassini spacecraft, which arrived at Saturn in 2004 and began observing the hexagon in 2006. Cassini’s mission to Saturn ended in 2017, but scientists are still mining the mission’s data (and will be for years to come). Leigh Fletcher of the University of Leicester, U.K., lead author of the new study, said:

The edges of this newly-found vortex appear to be hexagonal, precisely matching a famous and bizarre hexagonal cloud pattern we see deeper down in Saturn’s atmosphere.

While we did expect to see a vortex of some kind at Saturn’s north pole as it grew warmer, its shape is really surprising. Either a hexagon has spawned spontaneously and identically at two different altitudes, one lower in the clouds and one high in the stratosphere, or the hexagon is in fact a towering structure spanning a vertical range of several hundred kilometers.

Cassini captured images in 2012 that were used to create this animation of Saturn’s northern polar hexagon. Image via NASA/JPL-Caltech/SSI/Hampton University/ESA.

When Cassini arrived at Saturn in 2004, it was summer in that world’s southern hemisphere and winter on the northern half of the globe. Cassini saw a broad, warm, high-altitude vortex at Saturn’s southern pole, but none at the planet’s northern pole.

In the years since Cassini’s arrival at Saturn, the seasons shifted on Saturn, whose orbit around the sun and, thereby, seasonal cycle, lasts 30 years. In Cassini’s later years at Saturn, as summer approached that world’s northern hemisphere, scientists did see a polar vortex at Saturn’s north pole. The new work suggests this vortex forms high in the atmosphere too, also sitting hundreds of kilometers above the clouds, in Saturn’s stratosphere. 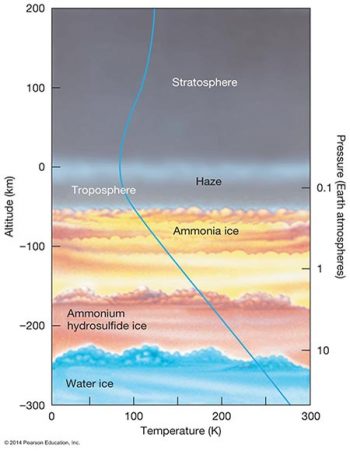 Layers in Saturn’s atmosphere, via KHadley.com.

This feature was discovered by NASA’s Voyager spacecraft in the 1980s and has been studied for decades; it is a long-lasting wave potentially tied to Saturn’s rotation, a type of phenomenon also seen on Earth in structures such as the polar jet stream.

Its properties were revealed in detail by Cassini, which observed it in multiple wavelengths – from the ultraviolet to the infrared – using instruments including its Composite Infrared Spectrometer (CIRS). However, at the start of the mission this instrument could not peer further up in the northern stratosphere, which had temperatures around -158 degrees Celsius [-252 Fahrenheit] – some 20 degrees [68 F] too cold for reliable CIRS infrared observations – leaving these higher-altitude regions relatively unexplored for many years.

One Saturnian year spans roughly 30 Earth years, so the winters are long.

Saturn only began to emerge from the depths of northern winter in 2009, and gradually warmed up as the northern hemisphere approached summertime.

As temperatures warmed around Saturn’s north pole, Fletcher and colleagues were able to study the polar vortex in infrared light. Guerlet said:

We were able to use the CIRS instrument to explore the northern stratosphere for the first time, from 2014 onwards. As the polar vortex became more and more visible, we noticed it had hexagonal edges, and realised that we were seeing the pre-existing hexagon at much higher altitudes than previously thought. 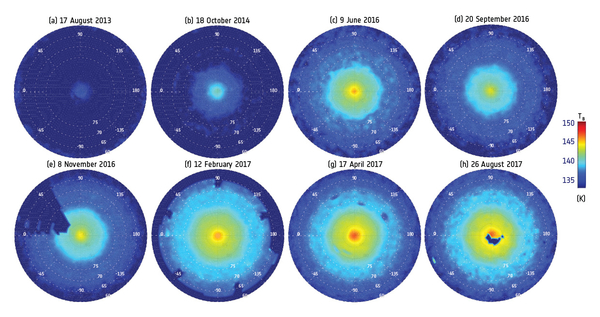 Scientists are fascinated by the differences between Saturn’s two poles. They said there was no hexagon at the south pole, either at the cloud tops or above, when it was observed early in Cassini’s mission during southern summer. The northern vortex is also nowhere nearly as mature as the southern vortex, as it is cooler and displays different dynamics from its southern counterpart. Fletcher said:

This could mean that there’s a fundamental asymmetry between Saturn’s poles that we’re yet to understand, or it could mean that the north polar vortex was still developing in our last observations and kept doing so after Cassini’s demise.

The long-running Cassini mission came to an end in September 2017.

These scientists also said that:

… understanding how and why Saturn’s north polar vortex has assumed a hexagonal shape will shed light on how phenomena deeper down in an atmosphere can influence the environment high up above, something that is of particular interest to scientists trying to figure out how energy is transported around in planetary atmospheres.

Saturn’s northern hemisphere passed its summer solstice in May 2017, shortly before Cassini plunged into Saturn’s atmosphere, ending its mission. The north polar region is expected to continue developing as the northern hemisphere moves toward its autumn equinox in 2024.

However, there is no spacecraft at Saturn now to obtain close observations of any subsequent changes in Saturn’s atmosphere. In this way, as in so many others, Cassini is missed. 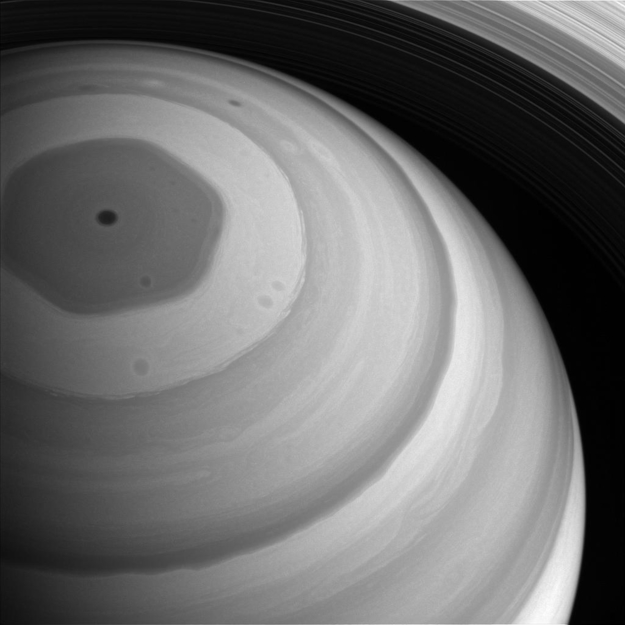 Bottom line: The hexagon at Saturn’s north pole – a jet-stream-like feature – was thought to occur in a lower layer of the atmosphere, the troposphere, where most of Saturn’s weather occurs. By mining Cassini spacecraft data, as the season shifted toward summer in Saturn’s northern hemisphere, European scientists found that the hexagon extends to about 180 miles (300 km) above Saturn’s cloudtops, into this world’s stratosphere.