The F ring, Saturn’s outermost ring, is perhaps the most active ring in our solar system, with features changing on a timescale of hours. 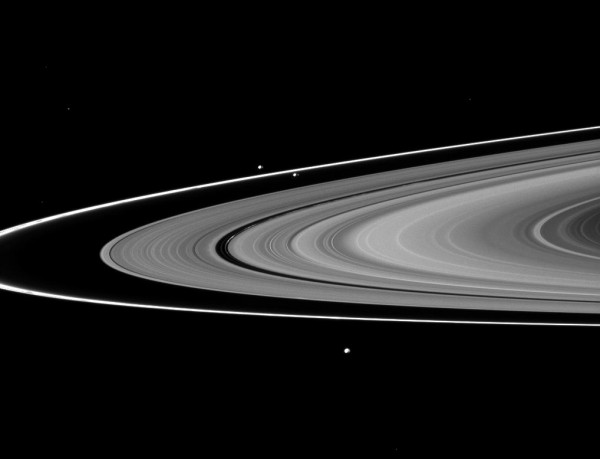 View larger. | The narrow F ring located just outside of the outer edge of the main rings. Two satellites sandwiching the F ring slightly above and to the left of the center of the image are the shepherd satellites Prometheus (inner orbit) and Pandora (outer orbit). Read more about this image.

Scientists at Kobe University in Japan this week (August 26, 2015) announced results of a study showing that Saturn’s F ring and its shepherd satellites are natural by-products of the final stage of formation of Saturn’s satellites. The F ring is the outermost of Saturn’s rings. It is perhaps the most active ring in our solar system, with features changing on a timescale of hours. These new results about this fascinating ring of Saturn were published in Nature Geoscience on August 17.

Of our solar system’s ringed planets, Saturn’s rings are most famous since they have been seen through telescopes for hundreds of years. In recent decades, spacecraft have revealed multiple rings and satellites for Saturn. In 1979, Pioneer 11 discovered the F ring located outside the main ring system that extends tens of thousands of kilometers. The F ring is very thin with a width of only a few hundred kilometers and possesses two shepherd satellites called Prometheus and Pandora, which orbit inside and outside the ring, respectively.

Although the Voyager and Cassini spacecraft both have made detailed observations of the F ring and its shepherd satellites since their discovery, their origin has remained unclear, until now.

According to the latest satellite formation theory – which includes contributions by Hyodo Ryuki and Professor Ohtsuki Keiji of Kobe University, authors of the new study – Saturn used to possess rings containing many more particles than they do today. It’s thought that Saturn’s satellites formed from aggregates of these particles. During the final stage of satellite formation, multiple small satellites formed in close orbit. The data obtained by Cassini indicated that the small satellites orbiting near the outer edge of the main ring system have a dense core.

In their simulations using the computing facilities at the National Astronomical Observatory of Japan, Hyodo and Ohtsuki revealed that the F ring and its shepherd satellites formed as these small satellites collided and partially disintegrated.

In other words, the F ring and its shepherd satellites are natural by-products of the formation process of Saturn’s satellite system. According to an August 26 statement from Kobe University:

This new revelation should help elucidate the formation of satellite systems both within and outside our solar system. For example, the above formation mechanism can also be applied to the rings and shepherd satellites of Uranus, which are similar to those of Saturn. 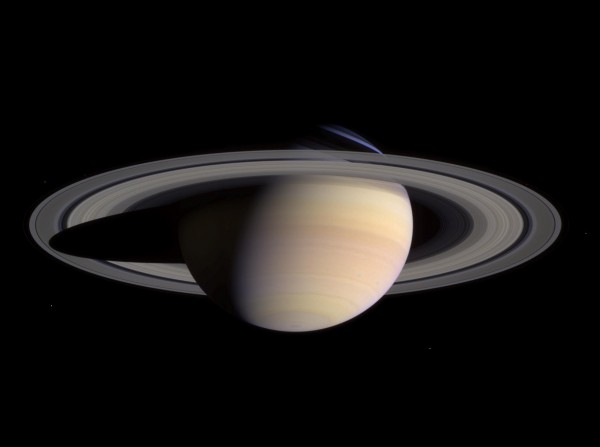 Saturn and its primary rings, via the Cassini spacecraft. Read more about this image.

Bottom line: Scientists at Kobe University in Japan have shown that Saturn’s F ring and its shepherd satellites are natural by-products of the final stage of formation of Saturn’s satellites.