It’s rare to have seven eclipses in a calendar year

How often do three eclipses happen in one lunar month?

Seven eclipses in one lunar year

A calendar year of seven eclipses can also feature 5 solar/2 lunar eclipses, but this last happened in the year 1935 and won’t happen again until the year 2206.

Or you could have 2 solar/5 lunar eclipses in one calendar year, but this last happened in the year 1879 and won’t happen again until the year 2132.

Suffice it to say a calendar year with seven eclipses is indeed rare.

Read more: How many solar and lunar eclipses in one calendar year?

It’s not so rare to have seven eclipses in 365 days. Some might argue that the calendar year is an artificial constraint … and they would be right. What if we shift our focus to a period of 365 days? How often do seven eclipses happen within one-year’s time (365 days)?

Fortnight, lunar month and lunar year. Note that a lunar eclipse and solar eclipse always take place within one fortnight (approximate two-week period) of one another.

Any year period containing seven eclipses must also have three eclipses within the framework of one lunar month – the time period between successive new moons or full moons.

Read more about the phenomenon of three eclipses in one month 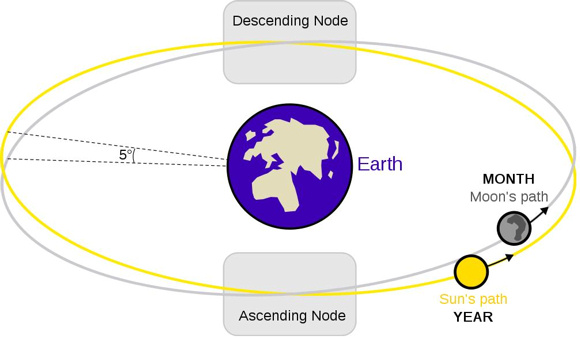 Although the moon’s orbit around Earth is inclined at 5o to Earth’s orbit around the sun, the moon crosses the Earth’s orbital plane twice a month at points called nodes. Every 173.3 days, the line of nodes points at the sun, and it’s the middle of the approximate five-week eclipse season (highlighted in gray). During any eclipse season, there are always one solar eclipse and one lunar eclipse, each of which occurs within one fortnight of the other. If the first eclipse arrives early enough in the eclipse season, three eclipses then take place within one lunar month, and it’s inevitable that seven eclipses occur in one year’s time.[/caption]

Thank you! Your submission has been received!
Oops! Something went wrong while submitting the form.
END_OF_DOCUMENT_TOKEN_TO_BE_REPLACED

Grus the Crane, home to ‘the bright one’