Astronomers use light from a gamma-ray burst — GRB 090323 — to study the chemical make-up of two galaxies in the early universe.

An international team of astronomers has used the brief but brilliant light of a distant gamma-ray burst named GRB 090323 as a probe to study the make-up of galaxies in the young universe. Surprisingly, the new observations — made with the European Southern Observatory’s (ESO) Very Large Telescope (VLT) — have revealed two galaxies that are richer in heavier chemical elements than is our sun.

The two galaxies may be in the process of merging. Such events in the early universe will drive the formation of many new stars and may be the trigger for gamma-ray bursts.

Click on the image below for an expanded view. 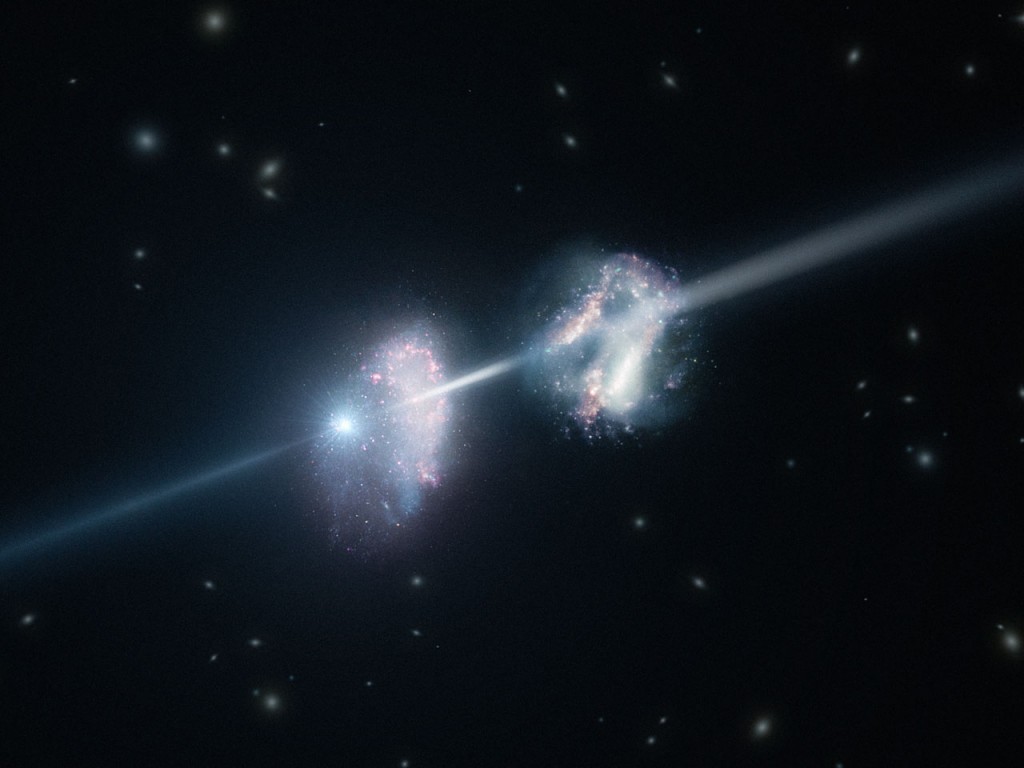 This artist’s impression shows two galaxies in the early universe. The brilliant explosion on the left is a gamma-ray burst. The light travels through both galaxies on its way to Earth (outside the frame to the right). Analysis of the light has shown that these two galaxies are remarkably rich in heavier chemical elements. Image Credit: ESO/L. Calçada

The study appeared October 19, 2011, in Monthly Notices of the Royal Astronomical Society.

Gamma-ray bursts are the brightest explosions in the universe. They are first spotted by orbiting observatories that detect the initial short burst of gamma rays. Astronomers immediately focus in with ground-based telescopes, which can detect the visible-light and infrared afterglows that the bursts emit over the succeeding hours and days.

The VLT observations show that the brilliant light from GRB 090323 had passed through its own host galaxy and another galaxy nearby. These galaxies appear as they were about 12 billion years ago. Such distant galaxies are rarely caught in the glare of a gamma-ray burst.

As the light from the gamma-ray burst passes through the two galaxies on the way to Earth (outside the frame to the right), some colors are absorbed by cool gas in the galaxies, leaving characteristic dark lines in the spectrum. Careful study of these spectra has revealed that these two galaxies are remarkably rich in heavier chemical elements. Image Credit: ESO/L. Calçada

When we studied the light from this gamma-ray burst, we didn’t know what we might find. It was a surprise that the cool gas in these two galaxies in the early universe proved to have such an unexpected chemical make-up. These galaxies have more heavy elements than have ever been seen in a galaxy so early in the evolution of the universe. We didn’t expect the universe to be so mature, so chemically evolved, so early on.

It is expected that galaxies in the young universe will contain smaller amounts of heavier elements than galaxies of the present day, such as the Milky Way. The heavier elements are produced during the lives and deaths of generations of stars, gradually enriching the gas in the galaxies. Astronomers can use the chemical enrichment in galaxies to indicate how far they are through their lives.

But the new observations, surprisingly, revealed that some galaxies were already very rich in heavy elements less than two billion years after the Big Bang.

The newly discovered pair of young galaxies must be forming new stars at a tremendous rate, to enrich the cool gas as strongly and quickly as the findings show. As the two galaxies are close to each other, they may be in the process of merging, which would also provoke star formation when the gas clouds collide. The new results support the idea that gamma-ray bursts may be associated with vigorous, massive star formation.

Bottom line: Observations of GRB 090323, a gamma-ray burst studied with ESO’s Very Large Telescope, have revealed that two galaxies in the early universe are richer in heavier chemical elements than is the sun. Results of the study by an international team appear in the October 19, 2011, issue of Monthly Notices of the Royal Astronomical Society.

Gamma-ray flash came from shredding of star by black hole

Have we seen a white hole?

New candidate for most distant object in the universe

Striking image of The Eyes of the cosmic Virgin