Have we seen a white hole?

In late May 2011, Physorg reported on a paper by Alon Retter and Shlomo Heller, suggesting that a known gamma-ray burst GRB 060614 might have been a white hole.

A black hole, by definition, is a huge mass in a small space. Its gravity is powerful. Light cannot escape it. Hence, a black hole’s blackness.

White holes are the theoretical opposite of black holes. As black holes draw in surrounding stars, dust, passing spaceships – whatever comes too near – so white holes, by definition, would radiate light. Matter can and would escape from white holes into the universe. Both white and black holes were entirely theoretical several decades ago, but now many actual astronomical objects are associated with black holes. Even our home galaxy, the Milky Way, is thought to have a black hole at its heart.

Artist’s concept of a white hole. Via Physorg

The idea of white holes was fashionable for a time in the 1970s. People spoke of wormholes, with a black hole on one end and a white whole on the other. Could these wormholes be tunnels in spacetime through which intrepid travelers could journey instantaneously across vast distances in the universe? But further thought caused people to realize that white holes would be extremely unstable, and hence highly unlikely to exist, in fact so unlikely that no one has talked about them much in recent decades. They are truly fringe science. So far, no astronomical source has been successfully tagged a white hole.

Alon Retter and Shlomo Heller associate the idea of a white hole with the Big Bang – the theoretical beginning of our universe – which, as they say, “was instantaneous rather than continuous or long-lasting,” which presumably gets around the problem of white hole instability. Retter and Heller write:

We thus suggest that the emergence of a white hole, which we name a ‘Small Bang’, is spontaneous – all the matter is ejected at a single pulse. Unlike black holes, white holes cannot be continuously observed rather their effect can only be detected around the event itself.

And that brings us to gamma-ray bursts, which, by definition, are short but exceedingly powerful bursts of gamma rays: the most energetic explosions in the universe. 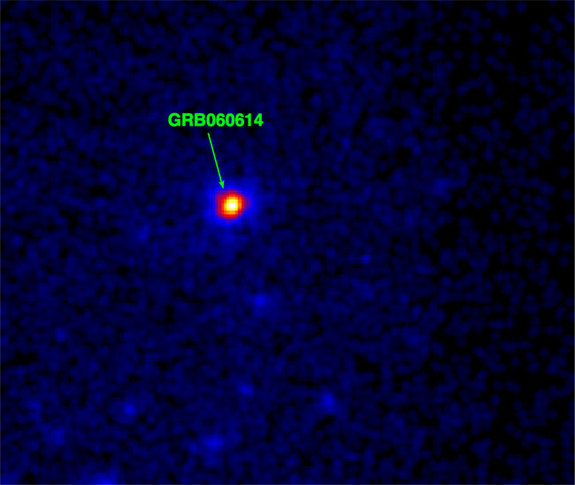 Retter and Heller propose identifying some gamma-ray bursts with white holes. In particular, they suggest that the gamma-ray burst labeled GRB 060614 – detected by NASA’s Swift satellite on June 14, 2006 – does not fit the normal categories for these objects. Gamma-ray bursts often occur in regions of low star formation, or they are associated with supernovae. GRB 060614 does neither, and thus, say these researchers, this gamma-ray burst might have been a white hole – radiating powerfully and briefly.

GRB 060614 had what is considered a “long duration” burst of gamma rays – 102 seconds. It is sufficiently unusual to warrant an article in Nature, whose lead author (Gehrels) said:

This is brand new territory; we have no theories to guide us.

Thus Retter and Heller’s paper – which appears to be self-published and is relatively easy to read – suggesting that:

If indeed the gamma-ray burst GRB 060614 can be shown to be associated with a white hole, the universe has just become a more interesting place!