NASA’s Gravity Probe B has confirmed a four-dimensional space-time vortex around Earth, which twists as Earth spins.

Einstein was right: There is a four-dimensional space-time vortex around Earth, and the spin of Earth does twist space-time.

That’s according to NASA, in an announcement made 52 years after scientists first imagined how to test Einstein’s theory on space-time – before the technology to test it had even been invented. NASA announced confirmation of the four-D space-time vortex around Earth on May 4, 2011.

What does it mean? As Einstein suggested in his general theory of relativity, published in 1916, gravity can be described as the motion of objects following curved lines in space – or rather space-time, as Einstein more accurately depicted it. The curved lines are caused by the presence of a mass, for example our Earth or sun. In other words, according to Einstein, mass causes space-time to curve. Objects moving near that mass roll toward it, much as a ball would roll toward a heavy person sitting on a trampoline. What’s more, as Earth spins, it should cause a twist in the fabric of space-time. NASA’s Gravity Probe B (GP-B) confirmed these two key predictions, derived from Albert Einstein’s general theory of relativity. The findings are online in the journal Physical Review Letters. 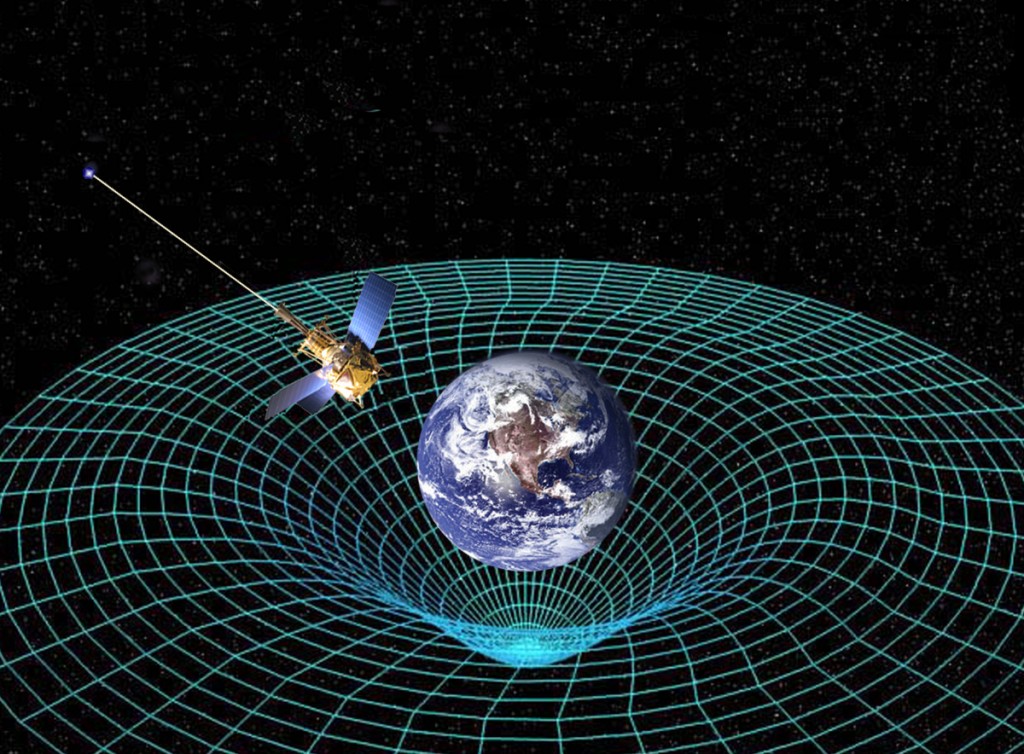 Artist concept of Gravity Probe B orbiting the Earth to measure space-time, a four-dimensional description of the universe including height, width, length, and time. Image Credit: NASA

The space-time around Earth appears to be distorted just as general relativity predicts.

Clifford Will of Washington University in St. Louis and an expert in Einstein’s theories, said:

This is an epic result. One day, this will be written up in textbooks as one of the classic experiments in the history of physics. In the opinion of the committee that I chair, this effort was truly heroic. We were just blown away.

GP-B was launched in 2004, designed specifically for this test. The experiment used four ultra-precise gyroscopes to measure the hypothesized geodetic effect, the warping of space and time around a gravitational body, and frame-dragging, the degree to which a spinning object pulls space and time with it as it rotates. GP-B determined both effects with unprecedented precision by pointing at a single star, IM Pegasi, while in a polar orbit around Earth. If gravity did not affect space and time, GP-B’s gyroscopes would point in the same direction forever while in orbit. But in confirmation of Einstein’s theories, the gyroscopes experienced measurable, minute changes in the direction of their spin, while Earth’s gravity pulled at them.

Imagine the Earth as if it were immersed in honey. As the planet rotates, the honey around it would swirl, and it’s the same with space and time. GP-B confirmed two of the most profound predictions of Einstein’s universe, having far-reaching implications across astrophysics research. Likewise, the decades of technological innovation behind the mission will have a lasting legacy on Earth and in space.

GP-B is one of the longest running projects in NASA history. Researchers had to develop whole new technologies — some of the most accurate and sophisticated ever — in order to keep the gyroscopes wobble-free as the satellite negotiated Earth’s atmosphere and magnetic field, all the while having to measure the gyroscope spin without touching it. To measure the minuscule angles predicted by Einstein’s theory, the gyroscope had to be one whose spin axis would not drift away from its starting point by more than one hundred-billionth of a degree each hour that it was spinning.

The GP-B gyro rotors, the size of ping-pong balls and made of pure fused quartz coated in niobium, are now listed in the Guinness Database of World Records as being the roundest objects ever manufactured, topped in sphericity only by neutron stars. Image Credit: Stanford

The decades of innovation involved a huge number of individuals and led to notable accomplishments and groundbreaking technologies:

The strange predictions of Einstein’s theory can be applied elsewhere in the universe, as the space-time vortex around Earth would be present around black holes, massive neutron stars, and active galactic nuclei.

Summary: Scientists have confirmed two of Einstein’s most profound predictions about the universe – which they called the geodetic effect and frame-dragging. In other words, there is confirmation of a four-dimensional space-time vortex around Earth, which twists as Earth spins. NASA’s Gravity Probe B satellite made the confirmation using gyroscopes pointed at the star IM Pegasi, while in a polar orbit around Earth.