Striking image of The Eyes of the cosmic Virgin

ESO’s Very Large Telescope has taken a striking image of a beautiful yet peculiar pair of galaxies nicknamed the Eyes.

The European Southern Observatory’s Very Large Telescope has taken a striking image of a beautiful yet peculiar pair of galaxies nicknamed The Eyes, located in the direction of the constellation we call Virgo the Virgin. 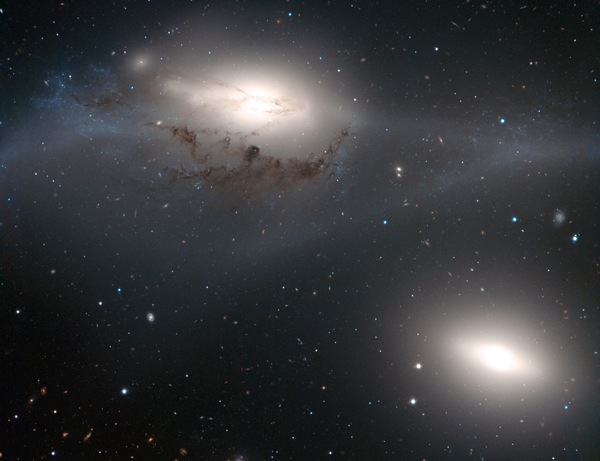 Two galaxies nicknamed the Eyes, located in the direction of the constellation Virgo the Virgin. Image Credit: ESO

The Eyes are an estimated 50 million light-years away and are some 100,000 light-years apart. The nickname of these two – the Eyes – comes from the apparent similarity between the cores of this pair of galaxies. They look like two white ovals, resembling a pair of eyes glowing in the dark when seen in a moderate-sized telescope.

But, although the centers of these two galaxies look similar, their outskirts are very different. The larger of these two galaxies is called NGC 4438 (in the upper left of this image), and it was once a spiral galaxy but is thought to have become badly deformed by collisions with other galaxies in the last few hundred million years. NGC 4438 has a lane of obscuring dust visible just below its nucleus, young stars can be seen left of its center, and gas extends at least up to the edges of the image. The other galaxy (in the lower right) is known as NGC 4435. It is compact and seems to be almost devoid of gas and dust.

The contents of NGC 4438 are thought to have been stripped out by a violent process: a collision with another galaxy. This clash has distorted the galaxy’s spiral shape, much as could happen to our own Milky Way when it collides with its neighboring galaxy Andromeda – three or four billion years from now. 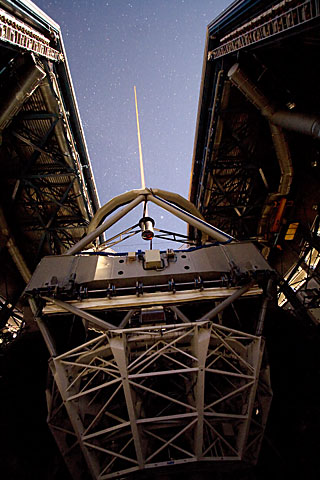 NGC 4435 might have collided at some time in the past with NGC 4438. Some astronomers believe the the two galaxies might have come to within about 16,000 light-years of each other some 100 million years ago. But while the larger galaxy was damaged, the smaller one was significantly more affected by the collision. Gravitational tides from this clash are probably responsible for ripping away the contents of NGC 4438, and for reducing NGC 4435’s mass and removing most of its gas and dust.

Another possibility is that the giant elliptical galaxy Messier 86, further away from the Eyes and not visible in this image, was responsible for the damage caused to NGC 4438. Recent observations have found filaments of ionized hydrogen gas connecting the two large galaxies, indicating that they may have collided in the past.

The elliptical galaxy Messier 86 and the Eyes belong to the Virgo Cluster, a very rich grouping of galaxies. In such close quarters, galaxy collisions are fairly frequent, so perhaps NGC 4438 suffered from encounters with both NGC 4435 and Messier 86.

When these images were obtained, although there were some clouds, the atmosphere was exceptionally stable, which allowed very sharp details to be revealed in this image taken using the VLT’s FORS2 instrument. Light passing through two different filters was used: red (colored red) and green-yellow (colored blue), and the exposure times were 1800 seconds and 1980 seconds, respectively.

Bottom line: This beautiful image from European Southern Observatory’s Very Large Telescope (VLT) shows a pair of galaxies known as the Eyes. They are located in the direction of what we on Earth know as the constellation Virgo. These galaxies might have collided with each other – or with other galaxies in this galaxy-rich region of space – at some point in the past.

Spica, in Virgo, is a whirling double star