New candidate for most distant object in the universe

Light from exploding star in early universe could be over 13.14 billion light-years away.

An international team of astronomers presented multiple lines of evidence for the record-breaking distance for GRB 090429B in a paper that has been accepted for publication in The Astrophysical Journal. Antonino Cucchiara, a former Penn State University graduate student, led the team. 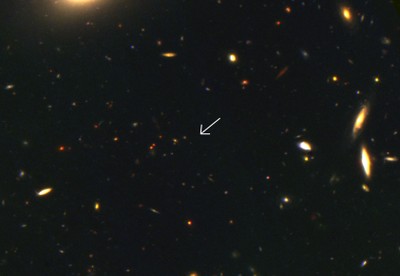 This particular gamma ray burst is thought to have erupted from a supernova, or exploding star, when the universe was less than 4% of its present age – around 520 million years old – and less than 10% of its present size. Derek Fox, associate professor of astronomy and astrophysics at Penn State and a co-author of the paper, said:

The galaxy hosting the progenitor star of GRB 090429B was truly one of the first galaxies in the universe. Beyond the possible cosmic distance record, GRB 090429B illustrates how gamma-ray bursts can be used to reveal the locations of massive stars in the early universe and to track the processes of early galaxy and star formation that eventually led to the galaxy-rich cosmos we see around us today.

Gamma-ray bursts, the brightest explosions known, occur somewhere within the observable universe at a rate of about two per day. Thanks to their extreme brightness, gamma-ray bursts can be detected by Swift and other satellite observatories even when they occur at distances of billions of light years. While the bursts themselves last only minutes at most, their fading “afterglow” light remains observable from premier astronomical facilities for days to weeks. Detailed studies of the afterglow during this time, when feasible, allow astronomers to measure the distance to the burst.

GRB 090429B was named for the April 29, 2009 date when it was discovered. Image Credit: Gemini Observatory/AURA/Levan/Tanvir/Cucchiara

These afterglow measurements were used to determine a cosmic distance record in 2009 for an earlier gamma-ray burst, GRB 090423, at a distance of 13.04 billion light years from Earth, making it temporarily the “most distant object in the universe.” This record was surpassed by galaxy discoveries in 2010 and 2011 that pushed the cosmic frontier out to 13.07 billion light years, and potentially even further.

Cucchiara, now at the University of California, Berkeley, said:

Our extreme estimate of the distance to GRB 090429B makes this a sort of ‘revenge of the bursts.’ A gamma-ray burst is once more contending for the title of most distant object in the cosmos — beyond the previously known most-distant quasars and galaxies.

Less than a week after the record-setting GRB 090423 made headlines around the world, this new burst, GRB 090429B, appeared in the sky with suspiciously similar properties. As with the previous burst, GRB 090429B was a short-lived event, lasting less than 10 seconds, and automated Swift observations showed it to have a relatively faint X-ray afterglow. Cucchiara, then a graduate student at Penn State, woke up in the early morning hours to direct observations at the Gemini North telescope on Mauna Kea, Hawaii, which he hoped would pin down the nature of this burst. Working with coauthors Andrew Levan of the University of Warwick, Nial Tanvir of the University of Leicester, and thesis supervisor Derek Fox of Penn State, Cucchiara found that, while the afterglow was visible in infrared observations, no optical light could be detected. This “drop out” behavior is a distinctive signature of the most-distant objects and has been used for initial identification of all of the most-distant quasars, galaxies, and gamma-ray bursts. 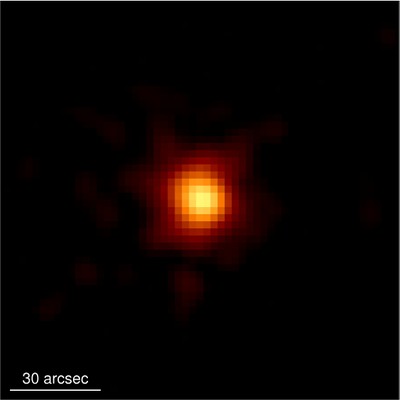 Cucchiara requested an immediate spectrum of the GRB 090429B afterglow from the Gemini operators, which would have provided a definitive measurement of the distance to the burst. Unfortunately, just as the spectrum was about to be taken, clouds blew in over the summit of Mauna Kea and hid the afterglow from sight. By the next night, the afterglow was too faint to yield a useful spectrum, and over the following nights it faded from view completely. Cucchiara said:

It was frustrating to lose sight of this burst, but the hints we had were so exciting there was no chance of us letting it go.

Determined not to let GRB 090429B become “the burst that got away,” the team spent two years carrying out a careful examination of their data to see if the burst is truly a candidate record-breaker or might be a partially obscured burst in a galaxy at a less dramatic distance. Importantly, this work has meant gathering new data — deep observations with Gemini and the Hubble Space Telescope that would have revealed a galaxy at the burst position in any of the less dramatic scenarios. This evidence, including the missing galaxy, indicates that the burst is extremely likely — a 99.3 percent chance — to be the most distant cosmic explosion, beyond the record set by GRB 090423.

Like the best politicians or talent-show contestants, the more we examined this burst, the better it looked.

With better luck, or more advanced facilities, it should be possible in the future to use the bright afterglows of bursts like GRB 090423 and GRB 090429B to explore the conditions of star and galaxy formation at these early cosmic epochs in detail.

Discovering extremely distant bursts is pretty fun, but we suspect there is a whole lot more information in the bursts, waiting for us, that we have yet to access.

Summary: The gamma-ray burst GRB 090429B is possibly the most distant object yet detected in the universe. It is estimated to be at a distance of 13.14 billion light years and was first detected by NASA’s Swift satellite in April 2009. An international team of astronomers led by Antonino Cucchiara has presented their evidence in a paper accepted for publication in the Astrophysical Journal.