There’s a new scary asteroid on the scene, but it’s not likely to strike us in 2032, despite some media playing up the doomsday aspect. Russian astronomers discovered the asteroid – which has been labeled as 2013 TV135 – on October 12, 2013, using images dating back to October 8. The asteroid is now estimated to have a diameter of 440 meters (about a quarter mile). That’s many times larger than the 17- to 20-meter meteor that streaked across Russian skies last February 15, shattering windows in Chelyabinsk and causing over 1,000 injuries, but no deaths. And it’s much, much larger than the 60-meter (or so) Tunguska meteor that apparently exploded above ground, flattening hundreds of miles of pine forest in Siberia in 1908. The Tunguska event remains the largest impact event on or near Earth in recorded history.

An Earth impact by this newest asteroid, 2013 TV135, would have the kinetic energy of 3,100 megatons of TNT. That is not enough to “blow up the Earth” as some reports have stated, but it’s no picnic in the park, either. Phil Plait at the Bad Astronomy blog on slate.com linked to this very grim output from an impact calculator giving more details on what would happen if 2013 TV135 were to strike Earth. Check it out.

However, asteroid 2013 TV135 probably won’t strike Earth. In his post on this subject from October 18, Plait explained it this way: 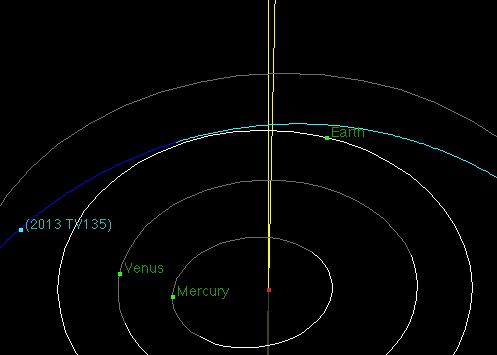 Astronomers were apparently able to track the orbit of this asteroid back in time to learn that asteroid 2013 TV135 passed within 0.045 AU of Earth on September 16, 2013. That’s 6,700,000 kilometers, or 4,200,000 miles. Frankly, that scares me more than anything else I’ve read about this object: that such a big asteroid could pass unnoticed at that distance.

Now 2013 TV135 has been classified as a PHO (Potentially Hazardous Object) and has a rating of 1 out of 10 on the Torino scale for impact hazards; this indicates that it “poses no unusual level of danger.”

We will hope and trust that’s true. Expect more about this asteroid in the days ahead.

Bottom line: Asteroid 2013 TV135 has a remote chance of striking Earth in 2032. As the asteroid was discovered only recently, earlier this month, its orbit is not known very well at this time. As the orbit becomes better known, it’s likely the potential for an impact will fall to zero.