We suspect most of you have not seen this comet, which is rising only shortly before the sun now. Let the Virtual Telescope’s Gianluca Masi show it to you online this week. 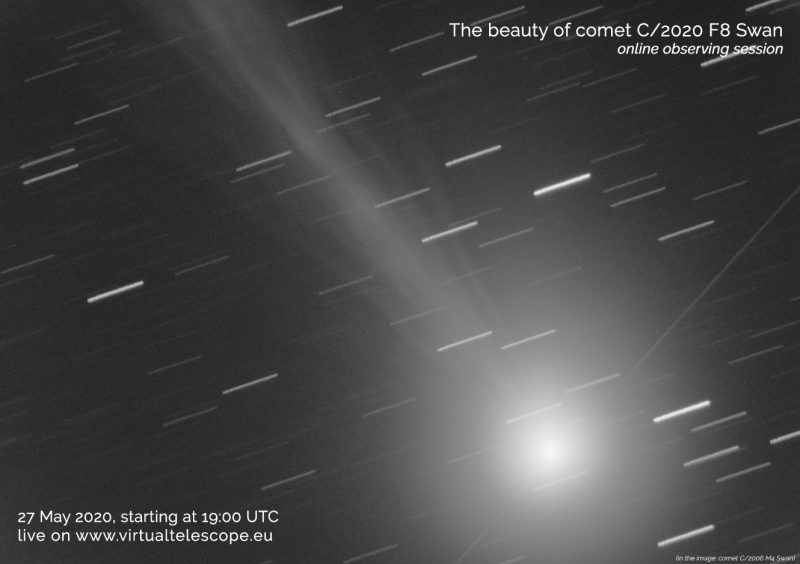 Comet C/2020 F8 (SWAN) is now visible with good binoculars in Northern Hemisphere skies, too, although finding it requires skill, with only a small window for locating it each day. That’s because the comet is rising only shortly before the sun, and can be found near the horizon when dawn breaks. This comet has already come closest to Earth (on May 12-13, 2020), at a distance of 51.7 million miles (83.2 million km). It’s now heading toward its perihelion, or closest point to the sun, on May 27, 2020.

On the day of perihelion, you have an opportunity to view the comet online. Gianluca Masi of the Virtual Telescope Project in Rome wrote:

Observing a nice comet is always an unforgettable experience … We will observe comet C/2020 F8 (SWAN) thanks to our robotic telescopes, sharing it live with the world, via the internet, making possible for you to spot this cosmic snowball from your home.

The live, free feed will run on May 27, 2020 at 19:00 UTC [2 p.m. Central Daylight Time in North America; translate UTC to your time]. That is when the comet will be close to its maximum brightness.

For more details, and to view Comet SWAN online at the time named above, visit Virtual Telescope Project 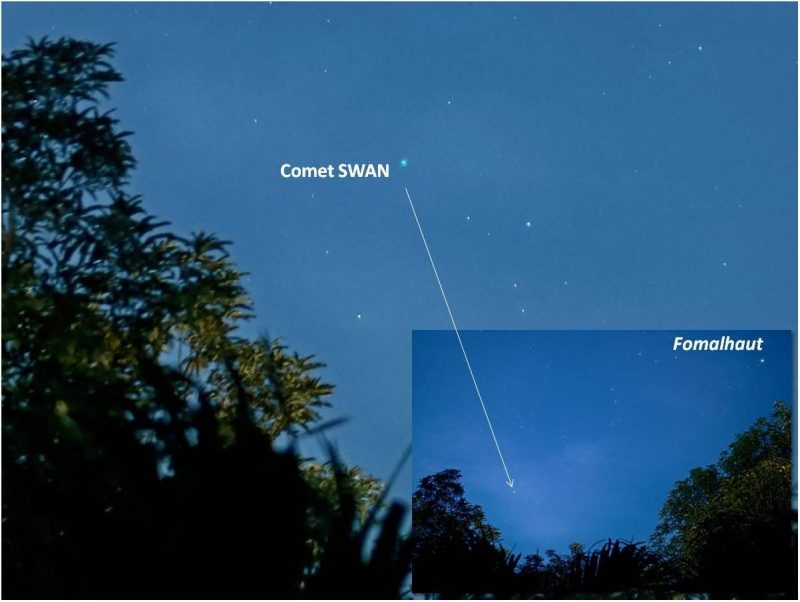 View at EarthSky Community Photos. | Dr Ski in Valencia, Philippines (latitude 9 degrees north), caught this image of the comet on May 2, 2020, and wrote, “Comet C/2020 F8 (SWAN) was discovered in March by NASA’s SOHO imaging. At magnitude +5, it was easy to spot through binoculars in nautical twilight when this image was captured.” Thank you, Dr Ski! Has the comet continued to brighten? Not as much as hoped so far, but you never know. It might get brighter as it approaches its May 27 perihelion. Read on …

What about if you want to observe the comet for yourself in the sky? As we mentioned above, the comet is rising only shortly before the sun, and can be found near the horizon when dawn breaks. Find it requires skill and optical aid. If you have those, notice the charts at the bottom of this post.

When you view the photos on this page, keep in mind that all of them were made by experienced sky observers, some using telescopes, all using cameras and (most likely) long exposures to bring the comet into better view. These photos don’t represent what the eye alone would see.

Comet SWAN has gotten a bit higher for my location in southwest Alabama. So here it is through trees!
SWAN revealed some of the tail. Image Richard Pickard. pic.twitter.com/hUHcDWoPqF

Amateur astronomer Michael Mattiazzo in Australia discovered comet C/2020 F8 (SWAN) on April 11, 2020. Mattiazzo was not looking at the sky when he made his discovery. Instead, he saw the possible – and then confirmed – comet while reviewing images captured by the Solar Wind ANisotropies (SWAN) instrument aboard the Solar and Heliospheric Observatory (SOHO) spacecraft overseen by NASA and the European Space Agency. This is Mattiazzo’s eighth comet discovery; like comet C/2020 F8 (SWAN), his others were found via inspection of SOHO images. It is the SWAN instrument’s 12th comet discovery. And it’s SOHO’s 3,932nd comet discovery!

Comet C/2020 F8 (SWAN) was ejecting huge amounts of water vapor, which showed as hydrogen on SOHO’s instrument, according to the European Space Agency. Michael Combi from the University of Michigan estimated that, by April 15, the comet was ejecting about 2,866 pounds (1,300 kg) of water vapor every second.

Thus, during the month of April, comet SWAN showed a trend of increasing brightness – likely due to that temporary outburst in activity – but then that trend stopped. As of early and mid May, the comet is not getting brighter, although it might (or not) get somewhat brighter in the days during which it’s approaching the sun for its May 27 perihelium.

Some experienced astrophotographers were able to capture amazing long-exposure images of comet SWAN, some of which show the comet’s tail as extremely long, as long as 20 times the apparent diameter of the full moon! Those observers were lucky to image comet SWAN when it was high in the sky from their perspective. As stated above, though, this comet appears low in the sky as viewed from the Northern Hemisphere. Its nearness to the horizon will subtract even more brightness from this (already not-so-bright) celestial visitor.

Check out the tweets below:

Always brilliant images from Fritz Helmut Hemmerich, and no different this time. Comet SWAN from the Canary Islands on the 10th. pic.twitter.com/UJZFrKG4Xy

The excited wagging of Comet SWAN’s ion tail. Photos by Gerald Rhemann, taken over the first 5 days in May. https://t.co/sCvcXsGIdf pic.twitter.com/bf8D3yRwa1

Comet SWAN is NOT, at this time, visible to the unaided eye.

Of course, the question on everyone’s mind is, will comet SWAN become visible to the unaided eye? And the answer is, probably not. But, with comets, you never know.

We repeat … It’s important to note that the photographs on this page are made by experienced photographers using telescopes and other special equipment. They do not mean that comet SWAN is or was clearly visible to the unaided eye for most observers.

Observers at latitudes like those in the southern U.S. (say, 30 degrees north latitude) and locations in both hemispheres close to the equator have the best chance – still only a slight chance – to view or capture this horizon-grazing comet. Your location on the globe will be key here. Also, sky conditions for observing comet SWAN are quite challenging. Observers equipped with binoculars or a small telescope will have a small window – only a few minutes, just before dawn – to spot it. Seeing it will, of course, also require a clear sky and, in that sense, the ongoing Covid-19 pandemic appears to have provided many parts of Earth with clearer skies, especially toward your horizons, than usual.

If you have a camera capable of taking long-exposure photos (which provide far more sensitivity than the human eye), a good option would be to point the camera at the approximate area where the comet is located (even if you don’t see the comet; charts provided below), and take several images at different exposures (30, 45, 60 seconds, or more), as well as diverse zoom settings. Then review those images, as some may reveal the comet with its greenish color, and perhaps even a hint of its long tail.

And, of course – as usual with comets – the unpredictability factor has to weigh in. We just don’t know what comets will do, until they do it.

One thing is certain. Sky enthusiasts will continue to monitor the comet using binoculars, small telescopes and cameras. Just don’t be fooled by claims that comet SWAN will provide an “amazing and spectacular show” to the unaided eye. If you do see the comet with binoculars or a small telescope – especially if you’re looking in a less than truly dark sky – your view might be more like that in the image below from Matthew Chin in Hong Kong: 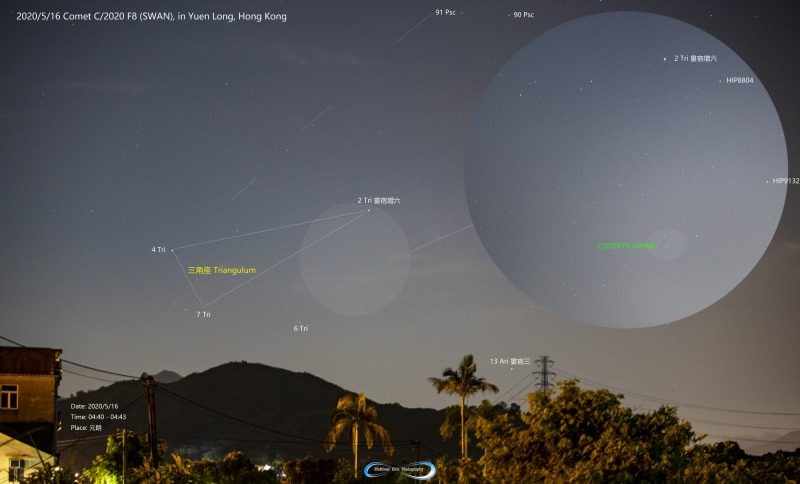 View larger. | Matthew Chin, an experienced sky observer, caught the comet – barely – from Hong Kong on May 16, 2020. Thank you, Matthew!

You might catch it using binoculars or a small telescope, but with the caveat that it’s very, very close to the horizon, not to mention that it’s in our sky only shortly before dawn each day, as the comet approaches its closest point to the sun on May 27. Although any improvement in the comet’s visibility cannot be ruled out, it appears to be remaining just a binocular or camera target, and may even get dimmer soon.

You’ll be looking toward your northeastern horizon, before sunup. See the charts at the bottom of this post.

Some charts to help you locate comet SWAN in the sky

These charts are set for the latitude of the southern U.S. If you are elsewhere on the globe, the comet will be up at or around this same time of day, in front of these same constellations and near these same stars. But the comet, and the stars, will be oriented differently with respect to different horizons around the globe. Or they might not be above your horizon at all. Stellarium-Web is tracking comet SWAN. Set your individual location on the globe, set the time for before dawn, face the program toward the northeast, and see the comet’s whereabouts each day. 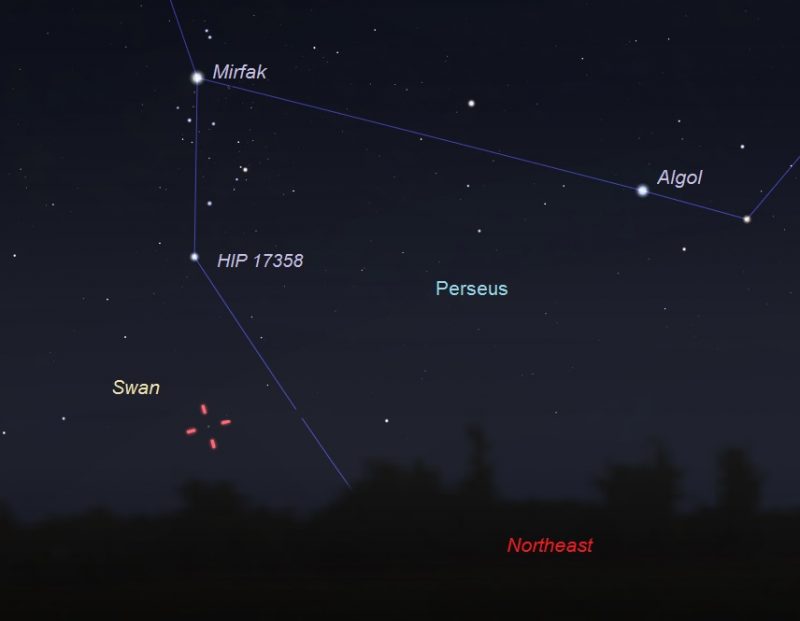 By May 24, 2020, comet SWAN will appear increasingly close to the horizon, making observations even more difficult than they were earlier in the month. This chart faces northeast just before dawn, as seen from the southern U.S. For an individualized view, try Stellarium. Illustration by Eddie Irizarry using Stellarium. 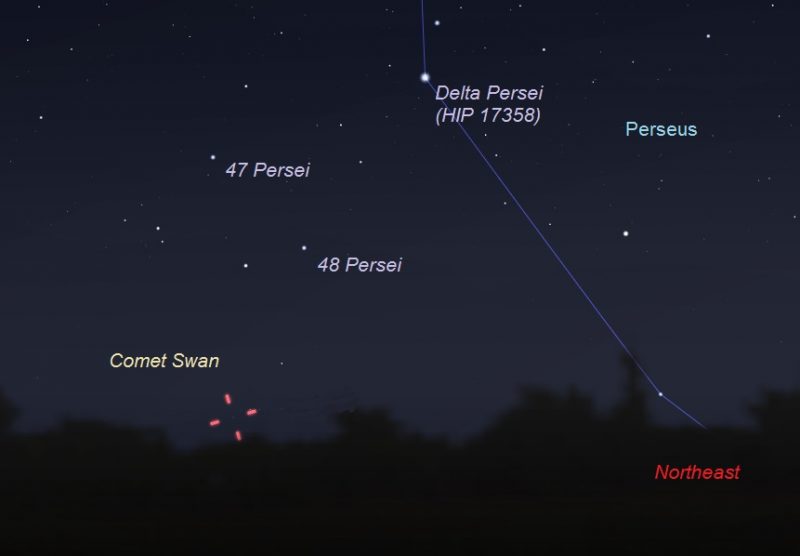 May 27, 2020. This is the date of the comet’s perihelion, or closest approach to the sun. At this point, comet SWAN will be located extremely close to your sunrise horizon. This chart faces northeast just before dawn, as seen from the southern U.S. For an individualized view, try Stellarium. Illustration by Eddie Irizarry using Stellarium. 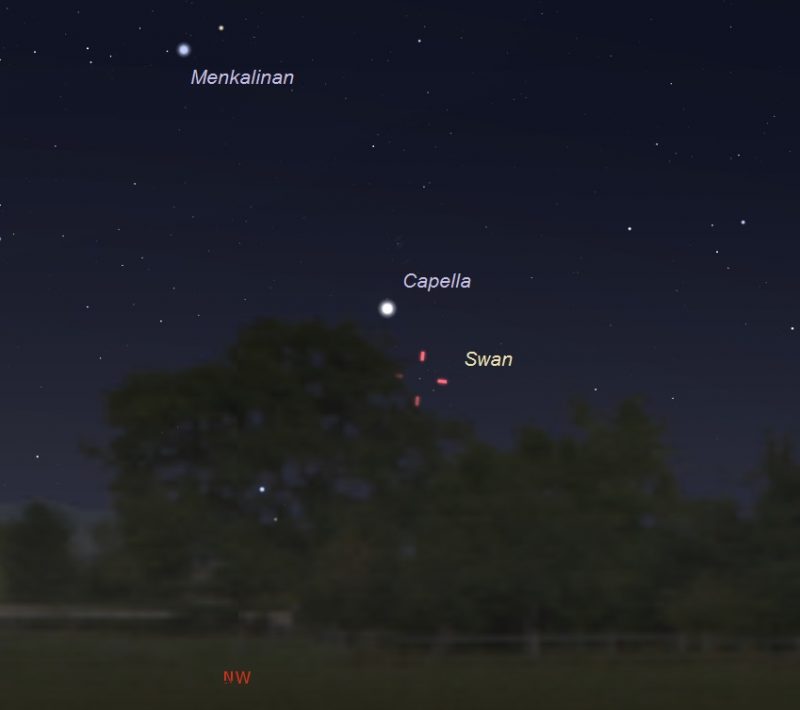 May 31 – June 1, 2020. After passing close to the sun, comet SWAN will reappear early in the evening sky (just after sunset, if it does not disintegrate), and pass close to the star Capella. This chart faces northwest during evening dusk, as seen from the southern U.S. For an individualized view, try Stellarium. Illustration by Eddie Irizarry using Stellarium. 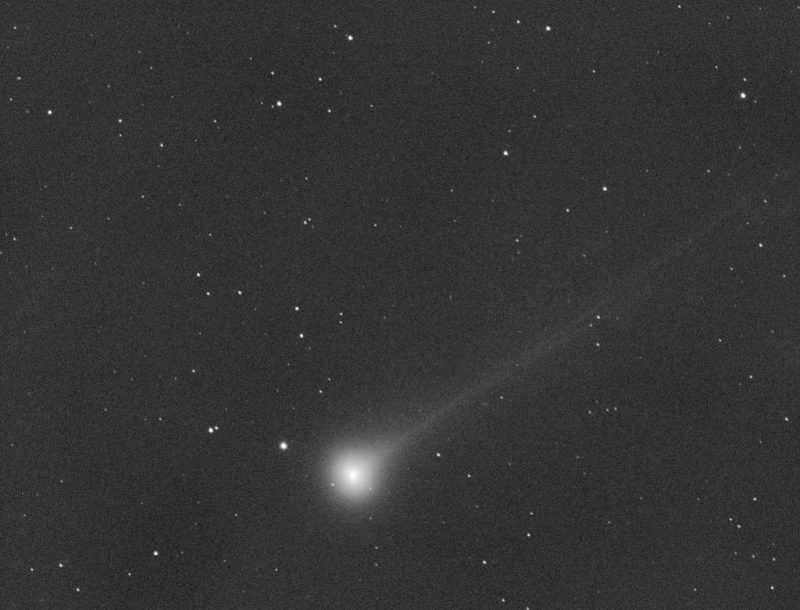 Update: As of May 26, 2020, Comet SWAN shows a visual magnitude between 7.6 – 8.4 and fading. The celestial visitor is becoming fainter, and may be disintegrating.

Bottom line: Comet C/2020 F8 (SWAN) has provided experienced astrophotographers with some amazing captures. Now, for Northern Hemisphere observers, it appears very close to the northeastern horizon before sunup; we don’t expect this comet to be widely seen, or to become easily visible to the eye. On May 27, 2020, the Virtual Telescope Project is offering online viewing of the comet. The live, free feed will run on May 27, 2020, at 19:00 UTC (2 p.m. Central Daylight Time in North America; for more details, and to view Comet SWAN online at the time named above, visit Virtual Telescope.