Breakthrough Starshot seeks proof of concept for a 100-million-mile-per-hour mission – using light-propelled nanocrafts – to reach the nearest star in 20 years. 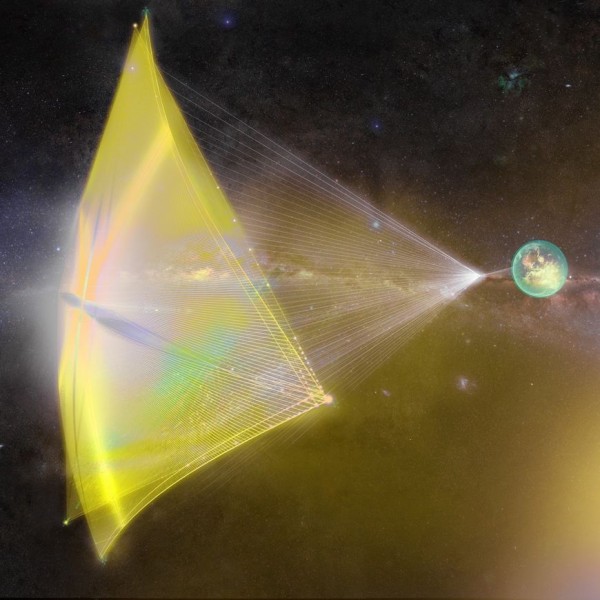 The dream of traveling to the stars is alive and well. Artist’s concept via BreakthroughInitiatives.org.

This month, Russian high-tech billionaire Yuri Milner and others announced Breakthrough Starshot, a plan to spend $100 million to take a next step forward toward star travel in our time. They’ll use the funds to begin proof-of-concept studies for a 100-million-mile-per-hour flyby mission to the next-nearest star system, Alpha Centauri, located about 4 light-years or 25 trillion miles (40 trillion km) away. They will be seeking confirmation that it’s possible to use a 100-gigawatt light beam to propel approximately 1,000 ultra-lightweight nanocraft to 20 percent of light speed. If it’s shown to be possible, this fleet of nanostarships could reach Alpha Centauri within about 20 years of launch.

Due to the finite travel speed of light (including radio waves), we would then wait 4 more years to hear back from any nanocraft that successfully swept through the Alpha Centauri system.

This plan to launch our human ships into the vastness of space is being led by the same organization that – in July, 2015 – announced an unprecedented $100 million new effort in the Search for Extraterrestrial Intelligence (SETI). At its website, Breakthrough Initiatives describes itself as:

… a program of scientific and technological exploration, probing the big questions of life in the universe: Are we alone? Are there habitable worlds in our galactic neighborhood? Can we make the great leap to the stars? And can we think and act together – as one world in the cosmos?

Pete Worden, a former director of NASA AMES Research Center, will lead Breakthrough Starshot, advised by a committee of stellar scientists and engineers. The board consists of Yuri Milner, physicist Stephen Hawking and Facebook’s Mark Zuckerberg. Ann Druyan, Freeman Dyson, Mae Jemison and Avi Loeb also participated in the announcement at at One World Observatory in New York City on April 12, 2016.

Yuri Milner is a major funder of Breakthrough Initiatives. He was an early investor in Facebook and Twitter and has funded other large endeavors, for example, the largest award in the world in the field of Biomedicine and Life Sciences, called the Breakthrough Prize. Image via Rusnanotekh.com

Scientists believe there are 3 stars in the Alpha Centauri system, although Proxima Centauri – at .2 lightyears away from the other two, and the actual closest star to our sun – may not be physically bound. Illustration by Ian Morrison, via manyworlds.space

Although there’s only one planet known so far in the Alpha Centauri system, orbiting Alpha Centauri B, you can bet that – if we were aiming to send nanocraft there – astronomers would turn their attention to seeking more planets in this nearby star system.

Why haven’t we visited the Alpha Centauri system already? It’s because 25 trillion miles is a long, long way from here. Using existing technology, our fastest current spacecraft would require some 30,000 years to get there, said Breakthrough Starshot.

But all existing spacecraft are huge and clunky in contrast to the gram-scale nanostarships – dubbed StarChips – being proposed here. Breakthrough Starshot hopes to establish whether tiny, light ships, on sails pushed by a light beam, could fly a thousand times faster than the fastest spacecraft built up to now.

What I love about the Starshot concept is that it’s truly visionary, leaps and bounds beyond what’s been proposed so far for star travel, and yet still grounded in current, cutting-edge science and technology. Starshot envisions launching a mothership carrying the 1,000 tiny spacecraft to a high-altitude orbit. Each craft is a gram-scale wafer, carrying cameras, photon thrusters, power supply, navigation and communication equipment, and “constituting a fully functional space probe,” says the Starshot team.

Mission controllers would deploy the nanocraft – send them on their way – one by one. A ground-based laser array called a light beamer would be used to focus light on the sails of the ships, to accelerate individual craft to the target speed “within minutes.” 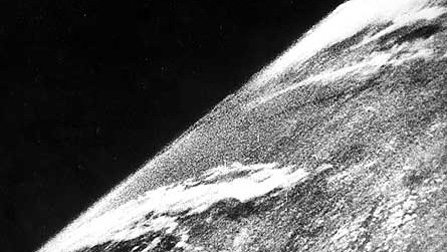 First photo of Earth from space, October 24, 1946, via White Sands Missile Range/Applied Physics Laboratory. Read more. The first images via nanocraft of the Alpha Centauri system would be rudimentary, perhaps like this first image of Earth?

The plan is to stick four cameras (two-megapixels each) on a chip that will allow for some elementary imaging. The data would be transmitted back to Earth using a retractable meter-long antenna, or perhaps even using the lightsail to facilitate laser-based communications that could focus a signal back towards Earth.

Breakthrough Starshot said in its recent statement that its plan:

… brings the Silicon Valley approach to space travel, capitalizing on exponential advances in certain areas of technology since the beginning of the 21st century.

For example, the lightsails would be made possible by advances in nanotechnology that are producing increasingly thin and light-weight metamaterials, which, Breakthrough Star said:

… promise to enable the fabrication of meter-scale sails no more than a few hundred atoms thick and at gram-scale mass.

The video below shows an animation of the proposed light beamer, a phased array of lasers for powering the lightsails and also for receiving information back from the nanocraft.

The research and engineering phase for Breakthrough Starshot is expected to last “a number of years.” Philip Lubin, a scientific advisor to the project, told Popular Science on April 27 that, in the initial phase:

… we will build a prototype laser array in the 10- to 100-kilowatt class, gram-scale ‘star-chips’ with imaging and other sensors and a laser communication system, and prototype sails, as well as explore the many technical challenges to building a full system.

Following that, development of the ultimate mission to Alpha Centauri would require a budget comparable to the largest current scientific experiments. Project leader Pete Worden mentioned a figure of “about $10 billion.” The full-scale effort would involve:

Generating and storing a few gigawatt hours of energy per launch.

Launching a ‘mothership’ carrying thousands of nanocrafts to a high-altitude orbit.

Focusing the light beam on the lightsail to accelerate individual nanocrafts to the target speed within minutes.

Accounting for interstellar dust collisions en route to the target.

Capturing images of a planet, and other scientific data, and transmitting them back to Earth using a compact on-board laser communications system.

Using the same light beamer that launched the nanocrafts to receive data from them over 4 years later.

The human story is one of great leaps. Just 55 years ago … Yuri Gagarin became the first human in space. Today, we are preparing for the next great leap, to the stars.

Earth is a wonderful place, but it might not last forever. Sooner or later, we must look to the stars. Breakthrough Starshot is a very exciting first step on that journey.

We take inspiration from Vostok, Voyager, Apollo and the other great missions. It’s time to open the era of interstellar flight, but we need to keep our feet on the ground to achieve this.

Bottom line: Breakthrough Starshot – part of the Breakthrough Initiatives – announced a plan in April, 2016, to send gram-scale nanostarship on a mission to Alpha Centauri, the next-nearest star system. The plan includes a travel time to this star system of only 20 Earth-years. An investment of $100 million has been committed for proof-of-concept studies in the coming years.