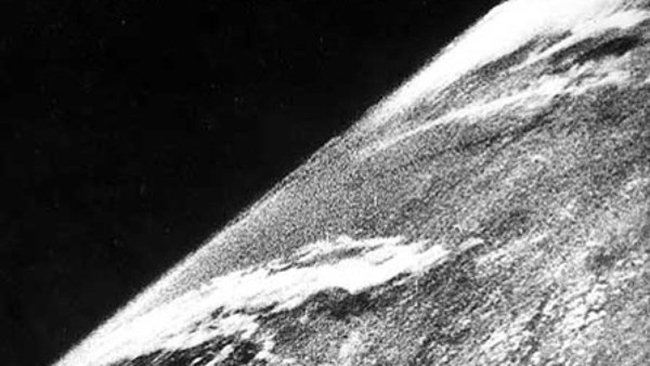 October 24, 1946. Were you alive at a time when we’d never seen Earth from space? Most of us weren’t, and it’s hard to imagine. But if you can imagine it, think how you’d have felt 70 years ago today, seeing this first-ever photograph of Earth from outer space. It was on this date that a group of soldiers and scientists in the New Mexico desert launched a V-2 rocket – fitted with a 35-millimeter motion picture camera – to a suborbital altitude of 65 miles (105 km). The camera was destroyed after being dropped back to Earth, but the film survived.

Air & Space magazine tells the story of this major event in space history:

Snapping a new frame every second and a half, the rocket-borne camera climbed straight up, then fell back to Earth minutes later, slamming into the ground at 500 feet per second. The camera itself was smashed, but the film, protected in a steel cassette, was unharmed.

Fred Rulli was a 19-year-old enlisted man assigned to the recovery team that drove into the desert to retrieve film from those early V-2 shots. When the scientists found the cassette in good shape, he recalls, “They were ecstatic, they were jumping up and down like kids.” Later, back at the launch site, “when they first projected [the photos] onto the screen, the scientists just went nuts.”

Before 1946, the highest pictures ever taken of the Earth’s surface were from the Explorer II balloon, which had ascended 13.7 miles in 1935, high enough to discern the curvature of the Earth. The V-2 cameras reached more than five times that altitude, where they clearly showed the planet set against the blackness of space. When the movie frames were stitched together, Clyde Holliday, the engineer who developed the camera, wrote in National Geographic in 1950, the V-2 photos showed for the first time “how our Earth would look to visitors from another planet coming in on a space ship.”

See videos and read the rest of the story from Air & Space. 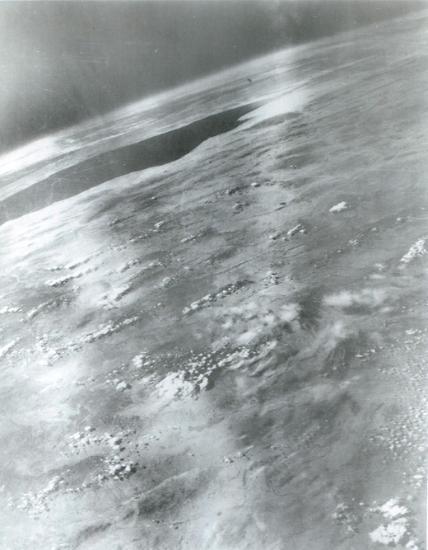 Scientists quickly got better at taking Earth’s picture. Here’s one from about six months later, taken from V-2 #21, launched on March 7, 1947. This picture is also from 101 miles up. The dark area at the upper left is the Gulf of California. Image via White Sands Missile Range/Naval Research Laboratory.

Bottom line: On October 24, 1946, a movie camera on board the V-2 rocket captured the first photo of Earth from outer space.