Scientists have found a planet orbiting the closest star system to Earth, only 4.3 light-years away.

The Alpha Centauri system – the nearest star system to Earth, only 4.3 light-years away – has been prominent in the dreams of space visionaries for decades. This star system became even more intriguing as European astronomers announced their discovery of a planet with about the mass of the Earth orbiting a star in the Alpha Centauri system. This planet – which orbits Alpha Centauri B – is also the lightest exoplanet ever discovered around a star like our sun. The astronomers announced their results on October 17, 2012 online in the journal Nature. 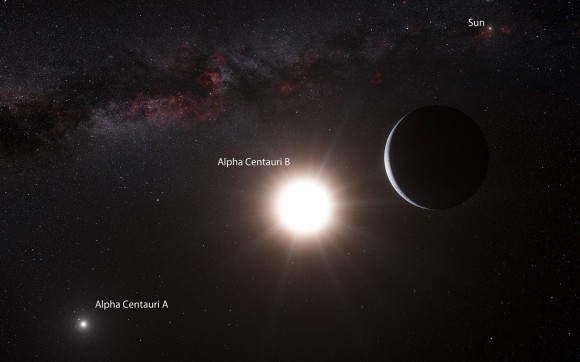 Alpha Centauri is one of the brightest stars visible from Earth’s Southern Hemisphere. What appears as one star to the eye is really two stars gravitationally bound, with a third star, Proxima, nearby. Proxima is actually the closest star to our solar system, but, as a whole, the Alpha Centauri system is considered to be the nearest star system to our Earth and sun. It’s 4.3 light-years away, which is over 25 trillion miles.

So you can see that this planet is extremely close to Alpha Centauri B. It is not in the star’s habitable zone – the zone within which liquid water can exist on a planet’s surface. Life as we know it requires liquid water. Thus it’s very doubtful that life exists on the newly discovered planet orbiting Alpha Centauri B.

What would the sky look like from this planet, if any beings were there to see it? For one thing, its sun – Alpha Centauri – would dominate the planet’s daytime sky. At night, the other large star in the system, Alpha Centauri A, would be brilliant in its sky, although Alpha Centauri A’s orbit keeps it hundreds of times further away from the planet than Alpha Centauri B.

How did they find this planet and why now? The European team detected the new planet using the HARPS instrument – that stands for High Accuracy Radial Velocity Planet Searcher – on the 3.6-meter telescope at ESO’s La Silla Observatory in Chile. In other words, this instrument is specially designed to search for distant planets. It works from the principle that a planet doesn’t just orbit its star; instead, the planet and star have a mutual orbit. They orbit a common center of gravity.

With HARPS, the astronomers were able to pick up the tiny wobbles in the motion of the star Alpha Centauri B created by its mutual orbit with its orbiting planet. The effect is minute — it causes the star to move back and forth by no more than 51 centimeters per second (1.8 km/hour), about the speed of a baby crawling. Why now? Because the technology has advanced to let them see a motion this minute. The astronomers say this discovery is the highest precision ever achieved using this method. 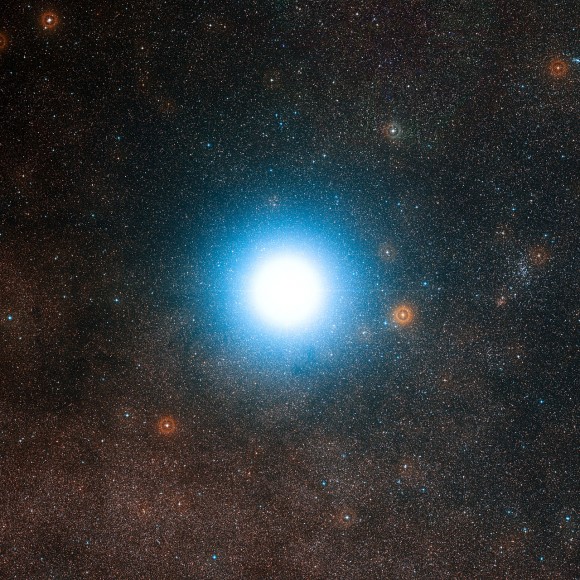 This is the first planet with a mass similar to Earth ever found around a star like the sun. Its orbit is very close to its star. The planet must be much too hot for life as we know it. But, the astronomers say, it might be just one planet in a system of several.

Bottom line: Astronomers have discovered a planet with about the mass of Earth in the Alpha Centauri system, only 4.3 light-years away. The planet orbits too close to its star to support life, but it might be one of several in this system, these astronomers say.