Posted by Bruce McClure and Deborah Byrd in Space | October 8, 2011

The prediction for October 8 Draconid meteor storm favors all of Europe, North Africa, and the Middle East. A bright moon will interfere.

Canadian astronomer Paul Wiegert announced earlier in 2011 that the annual Draconid meteor shower might produce a brief meteor storm of 1,000 meteors per hour on October 8, 2011.

He said the 2011 Draconid outburst could be expected to occur between 17 and 18 UTC on October 8. This translates into between noon and 1 p.m. Central Daylight Time on October 8 in the U.S. – daylight in North America. Because this shower’s radiant point in the constellation Draco is so far north on the sky’s dome, the shower will be visible primarily in the northern hemisphere. Plus Draco is highest in the sky during the evening hours. Thus the best locations from which to view the shower – according to Wiegert’s May-June 2011 prediction – should be Europe, North Africa, and the Middle East.

The shower is expected to continue to produce meteors, albeit it at a reduced level, into the North American evening of October 8. So North Americans might still have a chance to see the meteor shower.

A shower of 1,000 meteors per hour would be spectacular indeed. Woot?! Not yet.

Wiegert admits that meteor predictions are not ironclad. He said:

… you never know. Meteor showers are as difficult to predict as rain showers. The Draconids have surprised us before, and they may do so again. I’d encourage anyone outside on the night of October the 8 to look to the northern skies, just in case.

There is another major factor. The moon will be in a waxing gibbous phase on October 8. It will be in the sky – large and bright – when the sun goes down on October 8 as seen from around the world. As all meteor-watchers know, a large bright moon will drown all but the brightest meteors in its glare. That means the predicted rates of 1,000 meteors per hour will be severely diminished by the moon, no matter where you are on Earth.

The Draconid meteor shower has produced storms in the past. In 1933 and 1946, the Draconids produced “meteor storms” where shooting stars were produced at rates of 10,000 per hour or even more. Other less dramatic outbursts — where the meteor counts nonetheless ran into the hundreds per hour — occurred in 1952, 1985, and 1998. Normally, though, the Draconids are a weak shower producing perhaps 10 meteors per hour.

Let’s talk a moment about Paul Wiegert, the lone astronomer who made this prediction. Wiegert is an astronomer at University of Western Ontario. His specialty is solar system dynamics. In other words, he conducts numerical analyses of the way objects in our solar system move. He says he likes working with smaller bodies particularly: asteroids, comets and meteoroid streams. He made his announcement about the 2011 Draconids at the Canadian Astronomical Society (CASCA) meeting of professional astronomers in Ontario May 20-June 2, 2011.

Is the prediction credible? Yes, certainly, as predictions go. This is a good year to watch the Draconids! 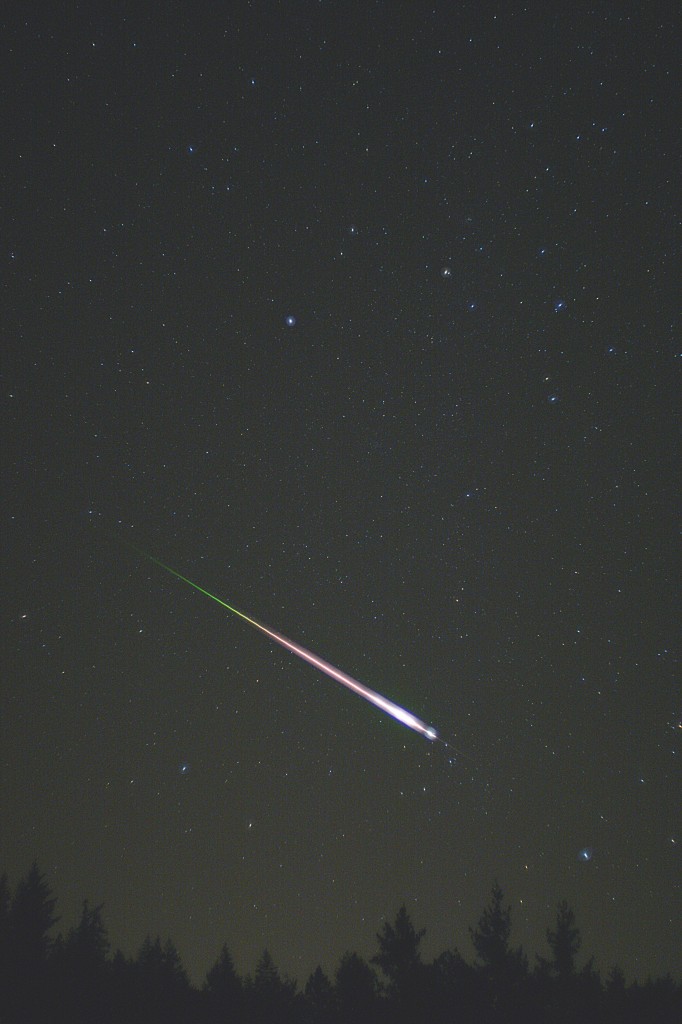 A meteor during the peak of the 2009 Leonid Meteor Shower. Image Credit: Navicore

How to view the Draconid shower

This meteor shower really favors the northerly latitudes, but that’s not to say the Draconid meteors can’t be seen from the northern tropics.

Wherever you may reside worldwide, the best viewing of these meteors will probably be at nightfall and early evening on October 8. That’s because that’s when the radiant point for the shower – in the constellation Draco the Dragon – will be highest in the sky for the night. All other things being equal, the most meteors tend to fall when the the radiant point is highest in the sky. North of about 35 degrees north latitude – the latitude of Memphis, Tennessee – the radiant is actually circumpolar. Circumpolar means that the radiant stays above the horizon all night long. So northerly latitudes are definitely favored for the Draconids.

Even so, the radiant will fall downward during the night and reach its low point close to dawn, as seen from all points in the northern hemisphere. Generally, you see few – if any – meteors when the radiant of the shower falls close to the horizon. However, if the Draconids should burst into storm during the predawn hours (that’ll be in Asia and possibly Alaska on October 9, if the prediction holds), you might not see an abundance of meteors but you may see some earthgrazers – unusually bright and long meteors that go horizontally across the sky.

However, nightfall and early evening on October 8, 2011 will probably provide the greatest number of meteors. At this time, the waxing gibbous moon will be rather low in your east to southeast sky and casting long shadows. Sit in the shadow of a barn or hedgerow of trees, though with an otherwise open view of sky. This should help darken the night for meteor watching.

Like most meteors in annual showers, any fiery Draconid meteors we see streaking across a dark night sky actually started out in a meteoroid stream in space – a river of icy, rocky debris – left behind in the orbit of a comet. The comet that spawns the Draconid shower is named Giacobini-Zinner. Known for over 100 years, this comet takes about 6.6 years to orbit our sun once.

Comet Giacobini-Zinner was the first comet to be examined by a spacecraft, when in 1985 the International Cometary Explorer flew through its tail, passing approximately 4,847 miles (7,800 km) from its nucleus.

A comet’s tail can extend for millions of kilometers in space, but any spectacular display of meteors on October 8 does not originate from the comet’s tail. It originates from the much-smaller comet nucleus, or core. Essentially an ice asteroid, the frozen comet nucleus partly evaporates when its orbit brings it close to the sun. At this time the comet’s tail, which is composed largely of water vapor and chemically related species, grows in size and may achieve naked-eye visibility from Earth. The vaporization process also releases copious quantities of small rocks and dust because the nucleus is far from pristine ice: it is more like a dirty city snow-bank after a long winter.

The solid rocky material produced by a comet continues to orbit the sun after its release. At this point, it has become a meteoroid stream in space. If the orbit of the meteoroid stream intersects Earth’s orbit – at a time when Earth is nearby – bits of cometary debris burn up in our upper atmosphere and produce a meteor shower. Particles no larger than a pea and which burn up at altitudes of 62 miles (100 km) are easily noticeable from the ground; in fact, this describes most meteors visible to the human eye.

Bottom line: The 2011 Draconid meteor shower might produce a meteor storm of 1,000 meteors per hour on October 8, 2011. Europe, North Africa and the Middle East are favored, but peak rates for the shower might extend into North America on the evening of October 8. There will be a large, bright moon in the sky. Its light will diminish the shower. But go outside and look anyway!