While extragalactic “rogue” planets – not orbiting any star – have been reported before, the new exoplanet is the first to be detected orbiting stars in another galaxy. And not just any galaxy … but M51, the beautiful Whirlpool, 23 million light-years away. 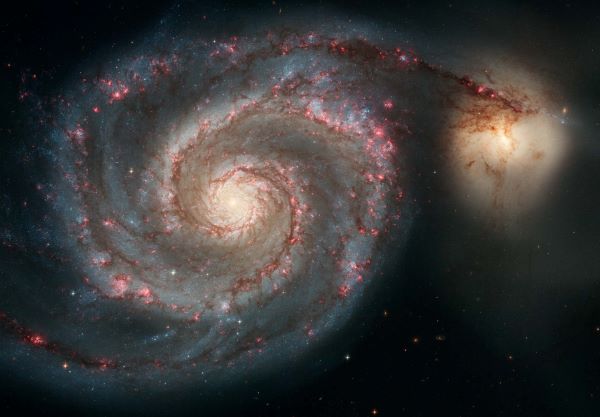 The Whirlpool Galaxy (M51), where the candidate exoplanet M51-ULS-1b was detected by the Chandra X-ray Observatory. We see this galaxy face-on. Image via NASA/ ESA/ S. Beckwith (STScI)/ the Hubble Heritage Team (STScI/AURA).

In recent decades, astronomers have found over 4,000 exoplanets, or worlds orbiting other stars. They range from small, rocky planets to huge gas giants, but they all have one thing in common. Every exoplanet found orbiting a star has so far resided in our own Milky Way galaxy. That makes sense, since the Milky Way’s own stars are the stars closest to us, cosmically-speaking. But now scientists at the Harvard-Smithsonian Center for Astrophysics – led by Rosanne Di Stefano – have used X-ray data to take the giant step across extragalactic space, to find the first evidence for a planet orbiting stars in another galaxy.

The planet, still a candidate at this point, appears to orbit a binary star system – two stars in a mutual orbit – in the glorious Whirlpool Galaxy (M51), a galaxy we see face-on, at a staggering 23 million light-years from Earth.

The extragalactic news was reported in The Physics arXiv Blog by Astronomy.com on September 24, 2020.

A new peer-reviewed paper detailing the discovery was submitted to arXiv on September 18, 2020. 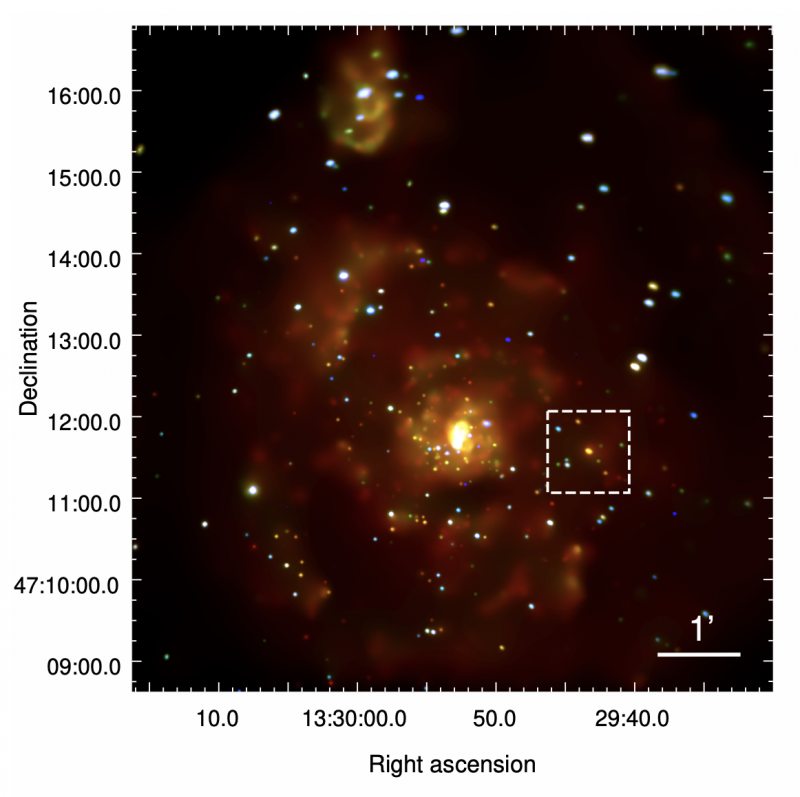 Image of the Whirlpool Galaxy from Chandra. The M51-ULS-1 star system, seen in bright X-rays, is the orange dot in the center of the square. Image via R. Di Stefano et al./ MNRAS.

The planet has been labeled M51-ULS-1b, and is estimated to be slightly smaller than Saturn. It orbits its stars about 10 times the distance from Earth to the sun. It was first detected on September 20, 2012, by NASA’s Chandra X-ray Observatory, but went unnoticed in the datasets at the time. It was only later found by Di Stefano and other colleagues.

It’s an exciting finding, but how did astronomers do it, especially when it can be difficult enough just to find planets in our own galaxy?

The answer is that this binary star system is rather unique. One of the two stars in the binary is simply a massive star. But the other one is thought to be a stellar remnant, either a neutron star or a black hole. The massive star is gradually being consumed by the neutron star or black hole companion, either of which would have extreme gravitational pull. The resulting dust releases huge amounts of energy in the form of X-rays, the same electromagnetic radiation used to take images of the inside of a human body or other objects. The amount of X-rays being released is so massive that this binary system is one of the brightest sources of X-rays in the entire Whirlpool Galaxy.

Also, whether the object emitting the X-rays is a neutron star or black hole, it is very small, smaller than a lot of planets. The team calculated that if a Saturn-sized planet orbited it, and transited in front of it from our vantage point – the way many exoplanets are discovered – it would entirely eclipse the object. As seen by Chandra, the transit lasted about three hours. 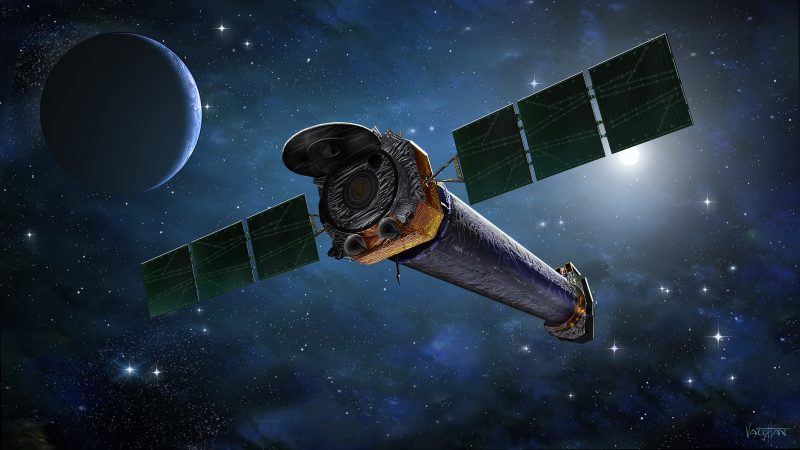 Couldn’t the possible planet actually be another star? The researchers say no, since the binary system is too young for other white dwarfs or other stars to have evolved there. What about natural variations in brightness of the neutron star or black hole? Again, the team says this is unlikely, because the different light frequencies in the spectrum all dimmed and then brightened again at the same time, exactly what would be expected of an eclipse by a larger body passing in front:

It is approximately symmetric, and has a shape typical of transits in which the source and transiting object have comparable size.

The researchers now expect that additional planetary candidates will be found soon:

The archives contain enough data to conduct surveys comparable to ours more than ten times over. We therefore anticipate the discovery of more than a dozen additional extragalactic candidate planets in wide orbits.

Since our own galaxy alone is now estimated to contain billions of planets, maybe even more planets than stars, it is reasonable to conclude that other galaxies do as well.

This discovery is tantalizing, but it is not actually the first possible detection of a planet in another galaxy. As reported in EarthSky in February 2018, astronomers at the University of Oklahoma (UO) announced evidence for multiple planets in a galaxy 3.8 billion light-years away, which contains the quasar RX J1131-1231. The main difference with these is that they are free-floating “rogue” planets not orbiting any stars, and the evidence for them is less direct, using a quasar microlensing technique where the gravity from the quasar acts as a natural magnifying glass. The quasar magnifies the light coming from its galaxy, making it easier to detect distant features. 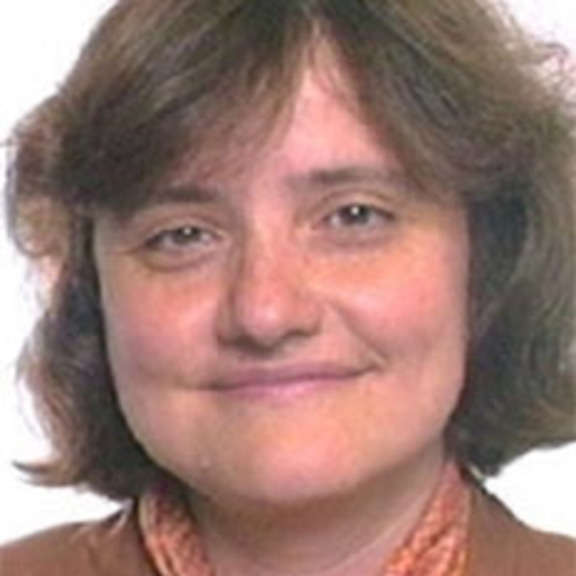 Rosanne Di Stefano at the Harvard Smithsonian Center for Astrophysics, who led the discovery team. Image via Harvard University.

That discovery was also made using Chandra. Using microlensing models at OU’s supercomputing center, the researchers calculated there could be as many as 2,000 rogue exoplanets in that galaxy, ranging from the mass of the moon to the mass of Jupiter.

Millions or more rogue planets like these are also now thought to exist in our own galaxy, but whether they were ejected from their original planetary systems or just formed where they are isn’t known yet.

M51-ULS-1b, however, would be the first “regular” planet discovered in a nearby galaxy, one that orbits a star. That bodes well for the prospect of many more being found in the years ahead. If our galaxy, the Whirlpool Galaxy and others are filled with planets, then how many worlds might there be in the universe? It’s a mind-bending thought, especially when it was first believed there were about 200 billion galaxies in the observable universe, but more recent studies say there are at least 10 times that many, or 2 trillion galaxies. Wow.

Bottom line: Astronomers used X-ray data to make the first discovery of an an exoplanet – labeled M51-ULS-1b – orbiting a star in another galaxy. The planet appears to orbit in a double-star system in the Whirlpool galaxy (M51), 23 million light-years away.

Source: M51-ULS-1b: The First Candidate for a Planet in an External Galaxy