“We are able to study them, unveil their presence and even have an idea of their masses. This is very cool science.” 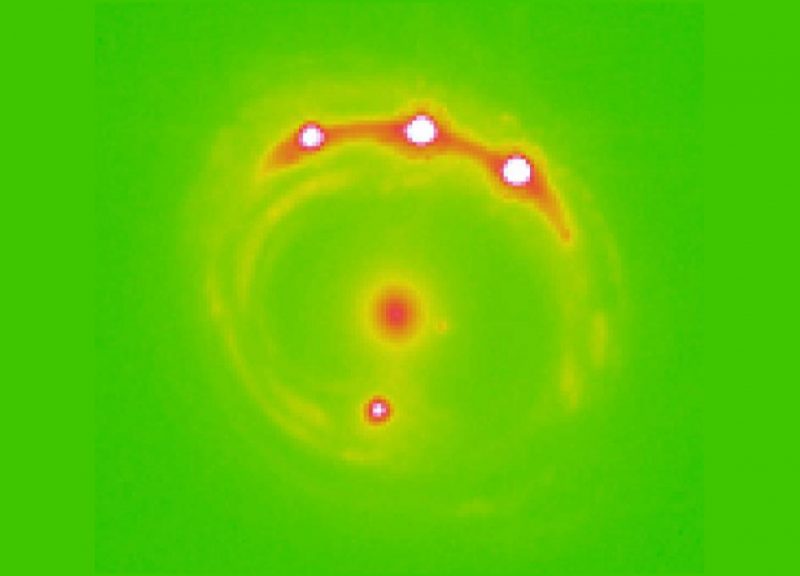 Image of the gravitational lens galaxy RXJ 1131-1231, with the lens galaxy at the center and four smaller lensed background quasars. Image via University of Oklahoma and AmericaSpace.

Thousands of exoplanets have been discovered so far, of many different types, but they all share one thing in common: they have all been found in our own galaxy. This is not surprising, however, since of course closer exoplanets would be easier to detect than ones farther away. But now, astronomers have reported the discovery of the first possible exoplanets in another galaxy, an incredible accomplishment, especially considering that the galaxy is 3.8 billion light-years away!

The planets were discovered by Xinyu Dai of the University of Oklahoma (OU), along with OU postdoctoral researcher Eduardo Guerras. Their paper is published in the peer-reviewed Astrophysical Journal Letters.

The astronomers used the quasar microlensing technique to detect the planets, with data from NASA’s Chandra X-ray Observatory.

The results, using microlensing models calculated at OU’s supercomputing center, indicated as many as 2,000 exoplanets, ranging from the mass of the moon to the mass of Jupiter. They are also unbound, meaning they are rogue planets not orbiting any stars. Similar rogue planets have also been found in our own galaxy.

Previously, planets have been detected only in the Milky Way galaxy. Here, we show that quasar microlensing provides a means to probe extragalactic planets in the lens galaxy, by studying the microlensing properties of emission close to the event horizon of the supermassive black hole of the background quasar, using the current generation telescopes. We show that a population of unbound planets between stars with masses ranging from moon to Jupiter masses is needed to explain the frequent Fe K-Alpha line energy shifts observed in the gravitationally lensed quasar RXJ 1131-1231 at a lens redshift of z = 0.295 or 3.8 billion light-years away. We constrain the planet mass fraction to be larger than 0.0001 of the halo mass, which is equivalent to 2,000 objects ranging from moon to Jupiter mass per main sequence star.

Dai said in a statement:

We are very excited about this discovery. This is the first time anyone has discovered planets outside our galaxy. These small planets are the best candidates for the signature we observed in this study using the microlensing technique. We analyzed the high frequency of the signature by modeling the data to determine the mass. 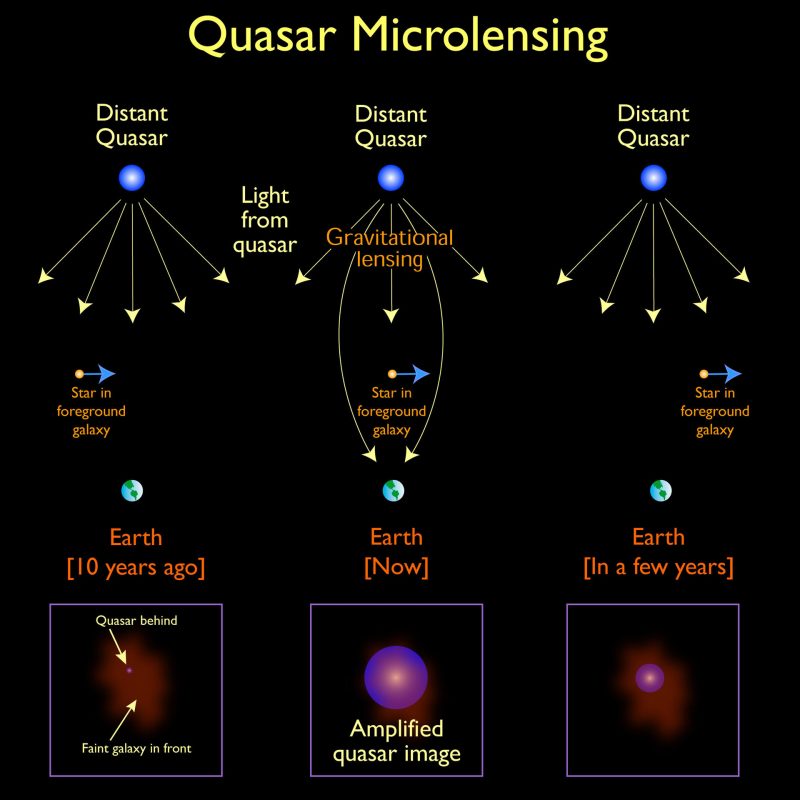 Microlensing of quasars allows astronomers to determine the presence of such planets, even though no telescope yet built would be able to see them. The gravitational field of the galaxy 3.8 billion light-years away, between us and the quasar, bends light in such a way that it creates four images of the quasar. The researchers found that there were peculiar line energy shifts in the quasar’s light that could only be explained by planets in the galaxy lensing the quasar. Guerras explained:

This is an example of how powerful the techniques of analysis of extragalactic microlensing can be. This galaxy is located 3.8 billion light-years away, and there is not the slightest chance of observing these planets directly, not even with the best telescope one can imagine in a science fiction scenario.

However, we are able to study them, unveil their presence and even have an idea of their masses.

This is very cool science. 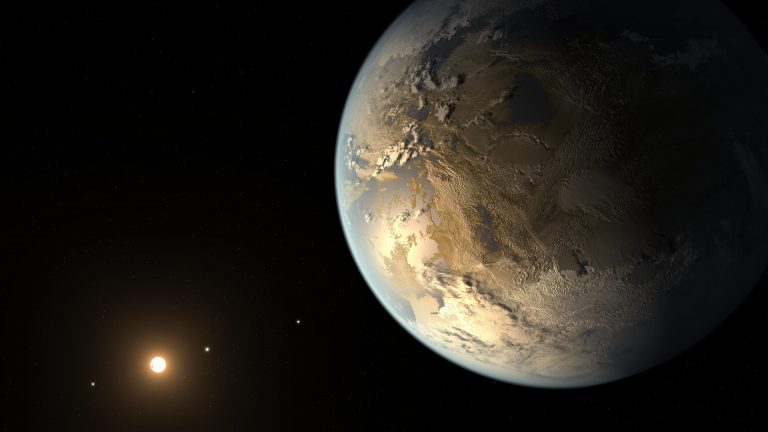 Artist’s conception of exoplanet Kepler-186f. Thousands of exoplanets have been discovered so far in our galaxy. Dai’s results suggest that, like our galaxy, other galaxies also contain rogue exoplanets and reinforce the idea that our galaxy is like others. Image via NASA Ames/SETI Institute/JPL-Caltech.

Bottom line: Astronomers have used microlensing to discover the first possible exoplanets in a galaxy 3.8 billion light-years away.