Young moon and Aldebaran at dusk May 7 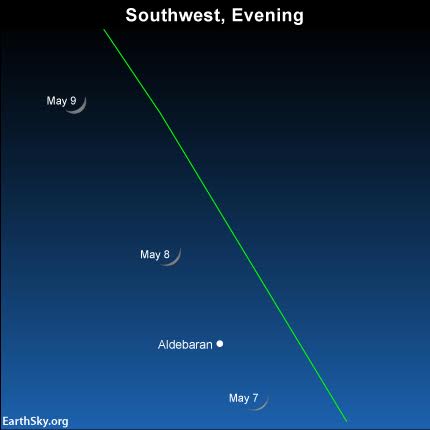 Tonight – May 7, 2016 – as darkness falls, people around the world might catch the young and slender waxing crescent moon near Aldebaran, brightest star in the constellation Taurus the Bull. The moon and Aldebaran both will follow the sun beneath the western horizon a short while after sunset, so they’ll be easy to miss. Look as soon as the sun goes down, and use your binoculars to scan the western horizon if you need to.

Can’t see ’em tonight? Don’t worry. The moon will move on subsequent nights eastward across our sky; really, it’s moving eastward in orbit around Earth. That means it’ll be moving away from the sunset, getting higher in the sky as night falls.

Meanwhile, Aldebaran is sinking into sunset glare, soon to disappear from the evening sky – if it hasn’t already from your point on the globe.

Meanwhile, that blazing object in the south at dusk is the planet Jupiter, the brightest star-like object in the May evening sky. As dusk deepens into nighttime, and Jupiter moves into the southwest sky, you might be able to use Jupiter make out the constellations Leo and Cancer. The next week will find the waxing crescent moon climbing away from Aldebaran and toward Jupiter.

Keep an eye on the moon for the next two or so weeks. It’ll guide you to the planets presently visible in the May night sky (Jupiter, Mars and Saturn) and several bright stars of the Zodiac (Aldebaran, Regulus, Spica and Antares).

With either binoculars or the unaided eye, take a close look at the dark side of the moon over the next several evenings. Chances are that you’ll see it aglow in earthshine: twice-reflected sunlight, from Earth to the moon – and then again, from the moon back to Earth.

If you have binoculars, scan along the terminator – the shadow line dividing the lunar day and lunar night – because that’s where you have the best three-dimensional views of the lunar landscape. Try viewing at dusk before the moon’s glare becomes too overwhelming.

It’ll be much easier to catch the moon after sunset tomorrow, on May 8. That’s because the crescent will be fatter and the moon will stay out later after sunset. The moon will be waxing (increasing) toward full phase these next couple of weeks, to showcase a seasonal Blue Moon on May 21, 2016.

Bottom line: After sunset, on May 7, look westward for the slender waxing crescent moon and Aldebaran, the brightest star in the constellation Taurus the Bull.

Thank you! Your submission has been received!
Oops! Something went wrong while submitting the form.
END_OF_DOCUMENT_TOKEN_TO_BE_REPLACED