Moon in front of Cancer on June 26 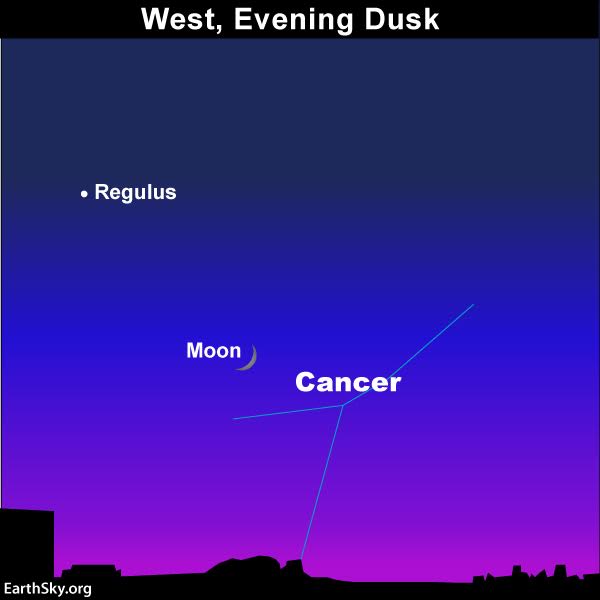 Tonight – June 26, 2017 – the waxing crescent moon beams in front of the constellation Cancer, the faintest constellation of the zodiac. We draw in the stick figure of Cancer for you on the star chart above. In the real sky, you’re likely not to pick out any stars in the moon’s vicinity, because this constellation is faint … and obscured by evening twilight. But Cancer’s stars will be there, behind the moon’s glare, all the same.

The sun travels in front of the constellation Cancer from about July 21 to August 10 annually. That may seem to be at odds with the horoscope page in the newspaper, which probably gives the sun’s passage through Cancer for around June 21 to July 21.

Why the discrepancy? It’s because a zodiac sign is different from a zodiac constellation, though people often confuse the two.

Here’s the definition of a tropical zodiac sign. By definition, the sun is always at the first point of the sign Cancer on the June solstice, irrespective of which group of stars backdrops the sun at this time. Look at the globe to note the Tropic of Cancer, which marks the northernmost extent of the sun’s travels on the June solstice.

Here’s the definition of a zodiac constellation. Any constellation can be thought of as a section of the starry sky, seen and wondered about for millennia by stargazers. In our time, constellations have official borders, which were agreed upon by the International Astronomical Union in the 1930s.

Bottom line: The moon is in front of the constellation Cancer the Crab on June 26, 2017.

Thank you! Your submission has been received!
Oops! Something went wrong while submitting the form.
END_OF_DOCUMENT_TOKEN_TO_BE_REPLACED