Waning moon and Venus November 4 to 6 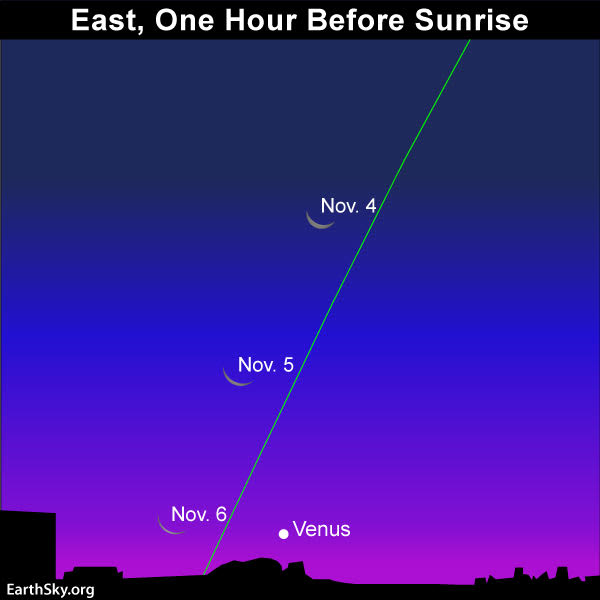 On the mornings of November 4, 5 and 6, 2018 – perhaps after staying out late or getting up early to look for Taurid meteors – let the waning crescent moon help guide your eye to the planet Venus at morning dawn.

Venus is the brightest planet, so you can see it very near the sunrise glare. It only entered the morning sky – passing between us and the sun – on October 26, 2018. So in early November, Venus is still extremely low in the eastern sky just before sunrise. It’s very near the sunrise point. We in the Northern Hemisphere have an advantage in viewing Venus before dawn at this time of year. It’s autumn for us, and the autumn angle of the ecliptic – or path of the sun, moon and planets – with respect to the morning horizon is always very steep. This means Venus will be above the sunrise, rather than to one side of it, as seen from this hemisphere. And that fact will make Venus easier to spot.

Find an unobstructed eastern horizon, and, if you have binoculars, bring them along. Venus will be higher up and easier to view in the morning sky as the month progresses. Each day throughout November 2018, this blazing beauty of a planet will rise sooner before sunrise and will brighten all the while.

Although Venus will be a fixture of the morning sky until mid-August 2019, it’ll shine at its brightest in late November and early December 2018, as the morning “star.”

At mid-northern latitudes, Venus rises roughly one hour before sunrise by around November 4. By the month’s end, Venus will rise some three hours before the sun.

At temperate latitudes in the Southern Hemisphere, Venus rises about one hour before sunup on or near November 6. By late November, Venus will rise two hours before the sun.

Bottom line: Venus has only now returned to the east before dawn. It’s very low in the sky as dawn breaks. You just might be lucky enough to catch the moon and Venus before daybreak on the mornings of November 4-6, 2018.

Thank you! Your submission has been received!
Oops! Something went wrong while submitting the form.
END_OF_DOCUMENT_TOKEN_TO_BE_REPLACED