Venus and Spica close at dawn 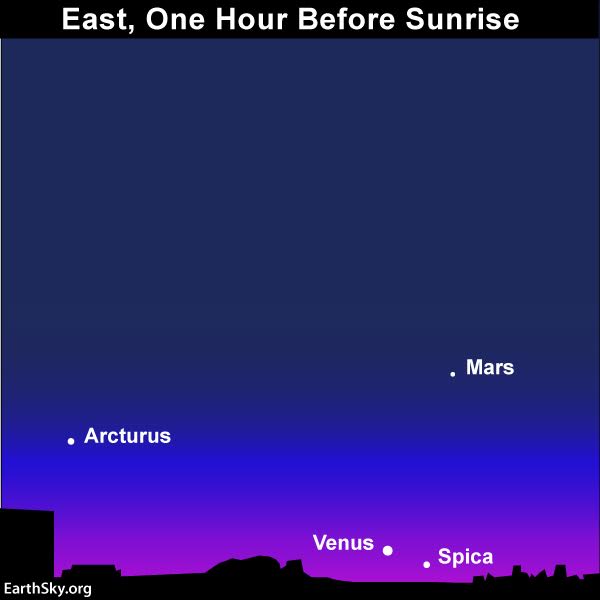 Around dawn in early November, 2017, the dazzling planet Venus pairs up with Spica, the constellation Virgo’s brightest star. They’ll appear closest before sunrise on November 2. Venus ranks as the third-brightest celestial body to light up the heavens, after the sun and moon. Spica, shining at 1st-magnitude brightness, is one of the sky’s most brilliant stars. Nonetheless, this star pales next to Venus, which outshines Spica by about about 90 times.

In fact, unless your sky is very dark and pure, and unless you happen to catch the pair at just the right moment before sunrise – when the two are high enough above the eastern horizon to be visible, yet the sky is still not too washed with dawn’s light for Spica to be seen – you might need binoculars to view Spica in the same binocular field with Venus in the November 2 morning sky.

Venus is much lower in the sky now than it was, and it has also shifted southward on the sky’s dome. Its rising time varies around the world. At mid-northern latitudes, Venus comes up more than an hour before sunrise. As you go southward on the globe, Venus rises closer to sunrise – just an hour before, at and around the equator – less than an hour before from temperate latitudes in the Southern Hemisphere. Click here for a recommended sky almanacs; they can tell you when Venus rises in your sky. Spica rises around that same time … but of course Spica is much fainter, so you won’t see it as easily.

Spica is somewhat more than twice as bright as Mars in early November. Mars will brighten slightly throughout the month; and by the time that Spica and Mars are in conjunction on November 29, Spica will be a touch less than twice the brightness of Mars.

Bottom line: Dazzling planet Venus and Spica, Virgo’s brightest star, are in the same binocular field before sunrise on or around November 2, 2017.

Thank you! Your submission has been received!
Oops! Something went wrong while submitting the form.
END_OF_DOCUMENT_TOKEN_TO_BE_REPLACED