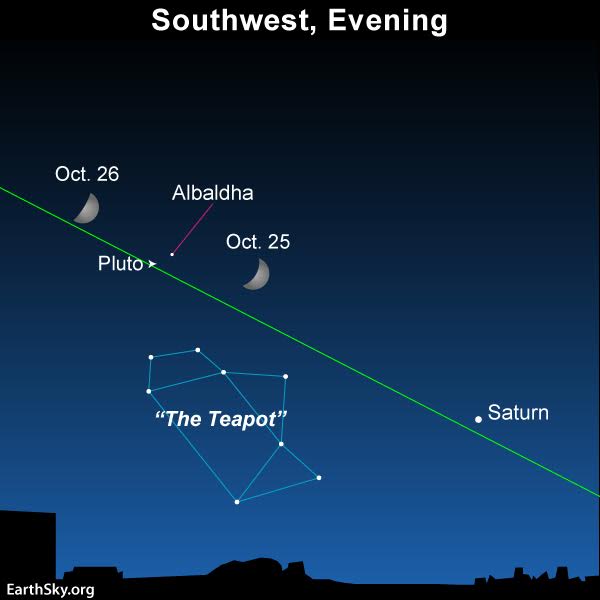 Tonight – October 25, 2017 – and tomorrow night, the rather wide waxing crescent moon shines fairly close on the sky’s dome to the dwarf planet Pluto. Both are in front of the constellation Sagittarius the Archer. Just don’t expect to see Pluto, which is about 1,600 times fainter than the dimmest star visible to the eye on a dark, moonless night. You would probably need about a 14-inch or larger telescope and a detailed sky chart to spot this distant world.

But you can take this opportunity to think of Pluto, one of our solar system’s most fascinating worlds.

First, stand outside and use the moon to get an idea of Pluto’s place in front of the starry heavens. Some people are familiar with the famous Teapot asterism (star pattern) in western Sagittarius. Pluto is found to the northeast of the Teapot now, fairly close to the 3rd-magnitude star Albaldha (Pi Sagittarii).

Then, think of Pluto’s awesome history, in terms of our human understanding of the cosmos. In 1930, astronomers hailed Pluto as a new planet in our solar system. That was before we knew the outer solar system contains many small objects, sometimes called trans-Neptunian objects, of which several hundred are currently numbered and several thousand are known but unnumbered. Pluto is the largest (so far). This increasing number of known objects in the outer solar system is one reason why, in 2006, the International Astronomical Union relegated Pluto to dwarf planet status.

Pluto wasn’t denied planetary status because it’s not massive enough to be a planet, by the way. Pluto – in and of itself – has sufficient mass to qualify. Rather, Pluto was reclassified by the IAU because this world doesn’t have sufficient heft to “clear the neighborhood around its orbit.”

In July 2015, the New Horizons spacecraft became the first Earth craft to sweep past Pluto. Its data required an Earth-year to be returned, and scientists are still mining the data, learning new things about Pluto. The image above is an example of what New Horizons is still discovering at Pluto. Images recently analyzed from the craft’s cameras revealed what appear to be small, low-lying isolated clouds – the first to be seen on the dwarf planet. Alan Stern – principal investigator for the New Horizons mission – commented:

If there are clouds, it would mean the weather on Pluto is even more complex than we imagined.

New Horizons is now headed for another trans-Neptunian object, by the way, a cold, classic Kuiper Belt object called MU69, in late 2018.

Pluto has an orbit that’s highly inclined with respect to the ecliptic, or path of the sun, moon and major planets. Pluto’s orbit is also very eccentric (oblong) and carries this world from about 30 astronomical units (AU) from the sun at perihelion to 50 AU from the sun at aphelion. One astronomical unit = sun/Earth distance. Pluto most recently reached perihelion – its closest point to the sun – on September 4, 1989, when it was somewhat less than 30 AU away from the sun.

Surprisingly, perhaps, Pluto was actually closer to the sun than was the planet Neptune was from 1979 to 1999. For instance, on September 5, 1989, Pluto was 29.66 AU from the sun whereas Neptune was 30.13 AU distant. Unlike Pluto, Neptune’s orbit isn’t very eccentric but almost circular. Neptune resides about 29.81 AU away from the sun at perihelion and 30.33 AU at aphelion – its most distant point from the sun.

Bottom line: On October 25 and 26, 2017, the waxing crescent moon shines in the same part of the sky as tiny, fascinating Pluto.

Thank you! Your submission has been received!
Oops! Something went wrong while submitting the form.
END_OF_DOCUMENT_TOKEN_TO_BE_REPLACED