Seen the moon, Mars, Venus yet? 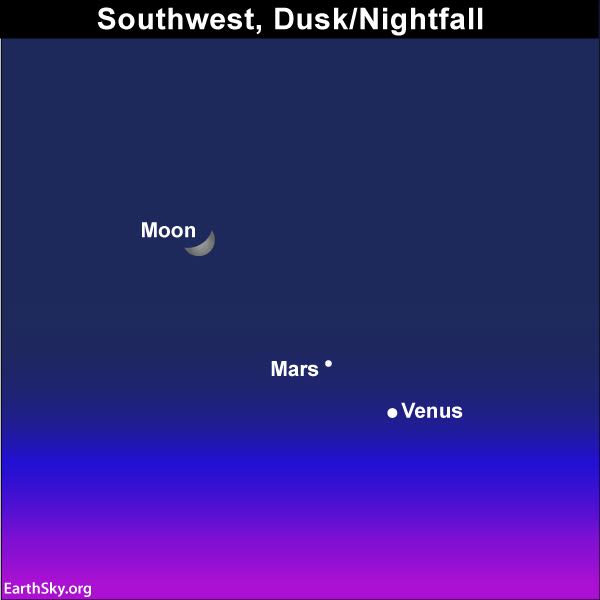 Tonight – February 1, 2017 – the moon and the planets Mars and Venus line up in front of the constellation Pisces the Fishes. Did you see the moon and these planets last night, when they made a triangle on the sky’s dome? Now the moon has moved in its orbit around Earth, and so the three appear differently in our sky.

First thing at dusk, look for the waxing crescent moon and Venus, the second-brightest and third-brightest celestial bodies, respectively, after the sun. Then, as dusk turns into darkness, seek for fainter Mars in between the moon and Venus. Mars should be fairly easy to see with the eye alone in a dark sky, but binoculars will help if your sky is marred by light pollution.

Pisces, meanwhile, is a faint constellation, but its shape is distinctive. It’s V-shaped, with the two parts of the V representing the Northern and Western Fish. (See sky chart below.) And it also has a prominent asterism – a noticeable pattern of stars – known as the Circlet of Pisces. Given a clear and dark-enough sky, you might be able to make out the Circlet (Western Fish) near Venus. If so, you might spot the Great Square of Pegasus to the north of the Circlet. We give you fair warning: The Square of Pegasus is much easier to view from the Northern Hemisphere than the Southern, especially at this time of year.

On the other hand, from either the Northern or Southern Hemisphere, an unobstructed view of your western sky after sunset should provide a grand view of the moon, Venus and Mars at nightfall on February 1. After this night, the moon will continue moving eastward in its orbit around Earth, but Mars and Venus will remain in the western sky, with Venus getting brighter!

Bottom line: Tonight – February 1, 2017 – the moon and the planets Mars and Venus line up in front of the constellation Pisces the Fishes.

Thank you! Your submission has been received!
Oops! Something went wrong while submitting the form.
END_OF_DOCUMENT_TOKEN_TO_BE_REPLACED