Moon, Jupiter and Spica on July 28 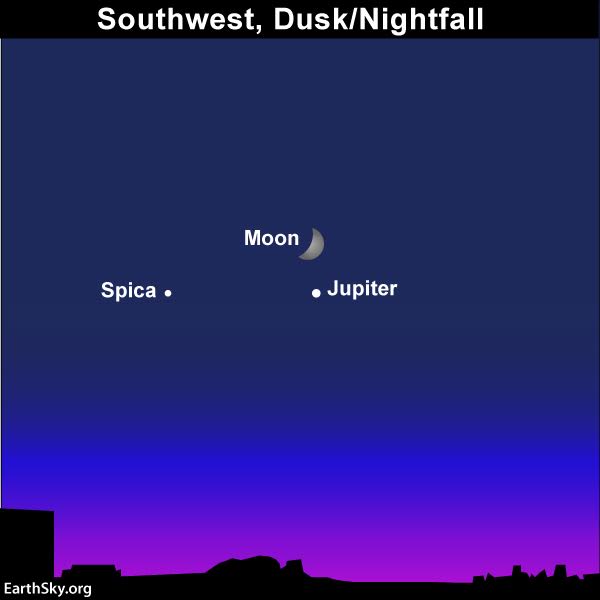 Tonight – July 28, 2017 – shortly after sunset, let the waxing moon guide you to the planet Jupiter and Spica, the brightest star in the constellation Virgo the Maiden. You simply can’t miss Jupiter. It’s the second-brightest heavenly body to illuminate the evening sky, after the moon.

Although the planet Venus is brighter than Jupiter, Venus appears only in the eastern sky during the wee hours before sunrise. Venus will remain in the morning sky for the rest of this year. So, right now and for some months to come, there’s no way to mistake Venus for Jupiter – or vice versa.

The moon and Jupiter come out at dusk, but you might have to wait for the sky to darken before seeing the star Spica to the east of the moon and Jupiter on July 28. Even though Spica counts as one the sky’s brightest stars, Jupiter shines some 14 times brighter than Virgo’s sole 1st-magnitude star.

Tomorrow, as darkness falls on July 29, note the moon’s change of position relative to Jupiter and Spica. This change in position from one day to the next is due to the moon’s actual motion in orbit around Earth.

The moon will move out of the constellation Virgo after a few more days, but Jupiter will shine in front of this constellation until November 2017. In other words, the brilliant planet Jupiter and the bright star Spica will remain companions in our sky for months to come. Because Jupiter stays in each constellation of the zodiac for roughly a year, 2017 is a good year for using Jupiter to locate Spica and to make friends with the constellation Virgo.

A year from now, in July 2018, Jupiter will partner up with the 2nd-magnitude star Zubenelgenubi, the alpha star in the constellation Libra the Scales. So 2018 will present a good year to become acquainted with Zubenelgenubi and Libra.

Bottom line: As darkness falls on July 28, 2017, use the moon to find Jupiter, and then rely on Jupiter to show you the star Spica for months to come.

Thank you! Your submission has been received!
Oops! Something went wrong while submitting the form.
END_OF_DOCUMENT_TOKEN_TO_BE_REPLACED

See the moon near Saturn, October 4 and 5