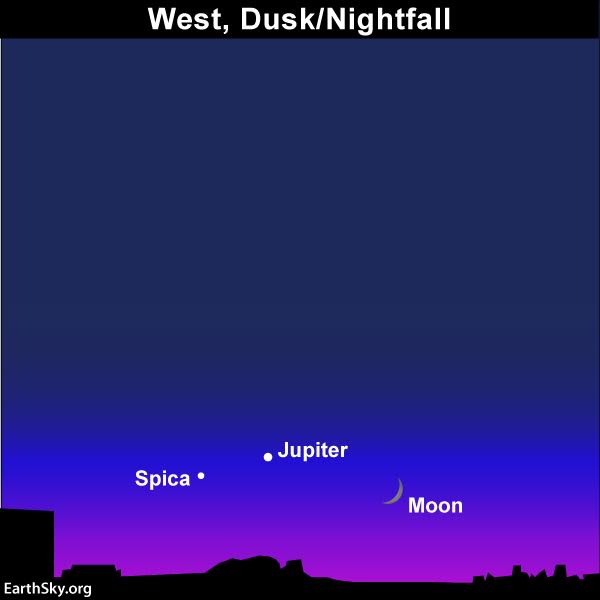 Tonight – August 24, 2017 – look for the waxing crescent moon to light up the western sky shortly after sunset. Also, in the deepening dusk, look for the dazzling king planet Jupiter to shine close to this slim moon.

Found ’em? Now watch for the star Spica to pop out in the vicinity of the moon and Jupiter at nightfall. Although Spica ranks as one of the sky’s brightest stars, it pales next to Jupiter, the brightest starlike object in the evening sky. The king planet shines about 12 times more brilliantly than Spica, Virgo’s sole 1st-magnitude star.

Why is Jupiter so bright? The main reason is that it’s our solar system’s largest planet. Still, Venus is brighter than Jupiter, because it’s closer to Earth, and because its surface is blanketed with highly reflective clouds.

There’s no mistaking Venus for Jupiter right now, though. Venus is in the morning sky, where it’ll remain for the rest of 2017. Jupiter will leave the evening sky in October 2017, sinking into the sun’s glare. A few weeks later, it’ll re-emerge before sunup to meet up with Venus in a close-knit conjunction of the sky’s two brightest planets. That’s to happen on November 13, 2017. Circle that date on your calendar! Very, very beautiful that morning and for several mornings around then.

Click here for recommended almanacs; they can give you the rising and setting times for the sun, moon and planets in your sky.

From everyplace worldwide, the moon moves eastward relative to the background planets and stars. That’s because it moves toward the east in its orbit around Earth.

Bottom line: On August 24, 2017, as soon as darkness falls, use the moon to find the nearby planet Jupiter and the star Spica low in the west.

Thank you! Your submission has been received!
Oops! Something went wrong while submitting the form.
END_OF_DOCUMENT_TOKEN_TO_BE_REPLACED