One of the most puzzling stars in all the heavens is Epsilon Aurigae. It’s an eclipsing binary star, but doesn’t behave exactly as one would expect. The strange brightening and dimming of its light has led to decades-long speculation about what is really going on in this remote star system.

You can see this rather faint third-magnitude star quite easily with the eye alone in a dark sky. As soon as darkness falls, look up high for the brilliant star Capella, the brightest in the constellation Auriga the Charioteer. Close to Capella, note the prominent triangle of starlets called The Kids. Lighting up the apex of this triangle is the star Epsilon Aurigae.

The star is also known by its Arabic name, Almaaz, which means the he-goat. 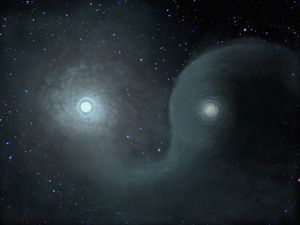 Artist's concept of Epsilon Aurigae star system, seen from above or below. Image via Wikimedia Commons.

Although Capella looks much brighter than Epsilon, that’s because Capella is so much closer. Capella resides about 42 light-years away, while the star Epsilon might lie over 2,000 light-years distant.

Epsilon is an eclipsing binary star, meaning that a “dark” star routinely eclipses the brighter star. Studies indicate that the dark body in this binary system consists of a star surrounded by a large disk of dust. David Darling has a good description of what’s going on with this star at his website, The Worlds of David Darling:

The bright component of Epsilon Aurigae is a hot-end supergiant F star, slightly more than 1 AU [ed. note: 1 AU = one Astronomical Unit, or one Earth-sun distance] in diameter. Large though this is, every 27.1 years the bright star is eclipsed for two years by something of truly colossal proportions. The prevailing idea is that the mysterious dark component is a star surrounded by a thick ring of obscuring dust set nearly edge on. The supergiant we see and the mystery star are perhaps 30 AU apart, the dust ring about the secondary star is some 20 AU in diameter. The ring has some sort of gap in the middle, as Epsilon Aur brightens a bit at mid-eclipse. We have little idea what lies at the center of the dusty ring. One theoretical model predicts an object with a mass of 4 solar masses, another with a mass of 15 solar masses. It could be one star that has generated a disk through a fierce out-flowing wind or … a pair of class B stars that are themselves in tight orbit.

Competing theories are still vying to explain the puzzle that is Epsilon Aurigae, Auriga the Charioteer’s distant and mysterious star. 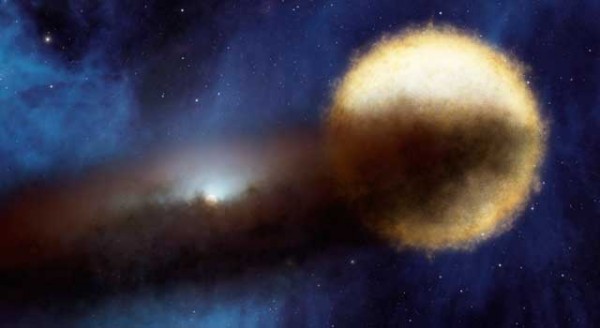 A possible model for the Epsilon Aurigae system. One star eclipses the other, and the eclipsing star is surrounding by a dark disk of dust. Image via NASA/JPL-Caltech.

Bottom line: One of the most puzzling stars in all the heavens is the star Epsilon in the constellation Auriga the Charioteer. In cycles of 27 years, Epsilon Aurigae’s light dims for a period of about two years. The star’s last dimming was from 2009 to 2011.