Moon between Pleiades and Head of Aries on March 15 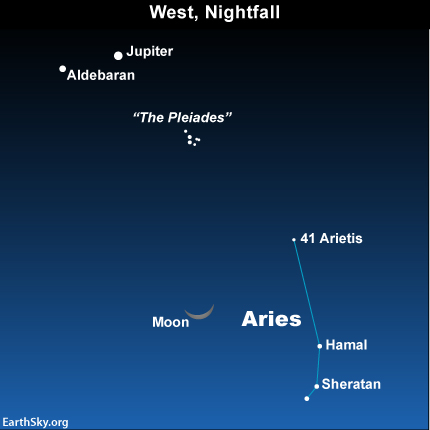 Just after sunset tonight you’ll spot the crescent moon above the western horizon. And as dusk turns into darkness, you may catch a comet near the horizon.

The moon is about four days past new so it still appears to us as a waxing crescent moon. The best place to tour the moon with your binoculars or telescope is right along the terminator – the shadow line dividing the lunar day from the lunar night. The sun’s light reflects from the moon’s illuminated or “day” side. We’re seeing only a portion of the day side: a crescent moon.

You might notice a faint glow on the darkened portion of the crescent moon tonight. This glow is known as earthshine. Sunlight reflected from Earth is lighting up the darkened part of the moon. This glow on the moon is exactly like what happens around full moon as seen from Earth, when moonlight floods an earthly landscape, lighting it up.

Using binoculars to tour the sky

The little star that you might spot near the moon is 41 Arietis, also known in Hindu astrology as Bharani. This star is quite dim, so you if you are in the city you may need binoculars to see it. The Pleiades star cluster, otherwise known as the Seven Sisters, should be more obvious above the moon. Tomorrow evening, on Saturday, a larger lunar crescent will meet up with the Pleiades on the sky’s dome.

For binocular astronomers this Friday evening: Look for earthshine to light up the night side of the moon and for Comet Panstarrs near the horizon.

Hamal, the brightest star of Aries

Thank you! Your submission has been received!
Oops! Something went wrong while submitting the form.
END_OF_DOCUMENT_TOKEN_TO_BE_REPLACED