Update: Who will be impacted by powerful Hurricane Irene?

Hurricane Irene is now a category 3 hurricane with winds sustained around 115 miles per hour. We’re keeping you updated.

Hurricane Irene, the ninth named storm and first hurricane of the season, is now a Category 3 storm with winds sustained around 115 miles per hour and a pressure reading of 956 millibars (mb).  Unfortunately, Irene is now the first major hurricane of the 2011 Atlantic hurricane season.

Currently, Irene is battering portions of the Bahamas and Turks and Caicos where hurricane and tropical storm warnings are in place. The forecast track of Irene is becoming more certain, but as of now, we are still not sure if Irene will make landfall along the North Carolina coastline. It is also difficult to forecast the intensity of a tropical cyclone. Fortunately, we can rule out big impacts in Florida, Georgia, and South Carolina.  Three days ago, this was not the case.  Everyone from the North Carolina coasts into the Northeast should monitor this system very closely this week.

Here is the forecast track by the National Hurricane Center (NHC): 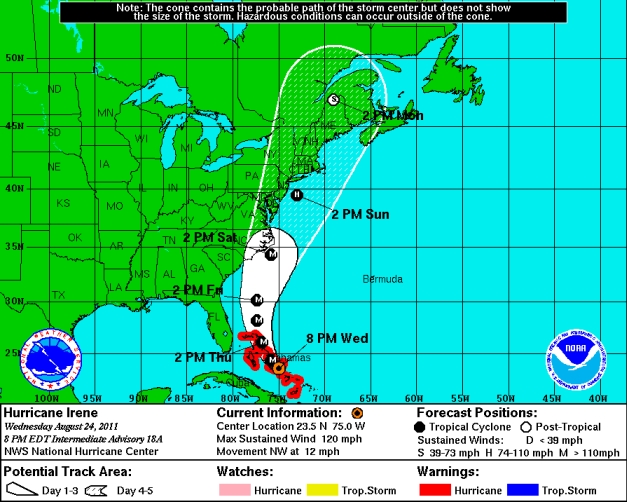 Below are the projected paths for Hurricane Irene from various model runs (spaghetti model): 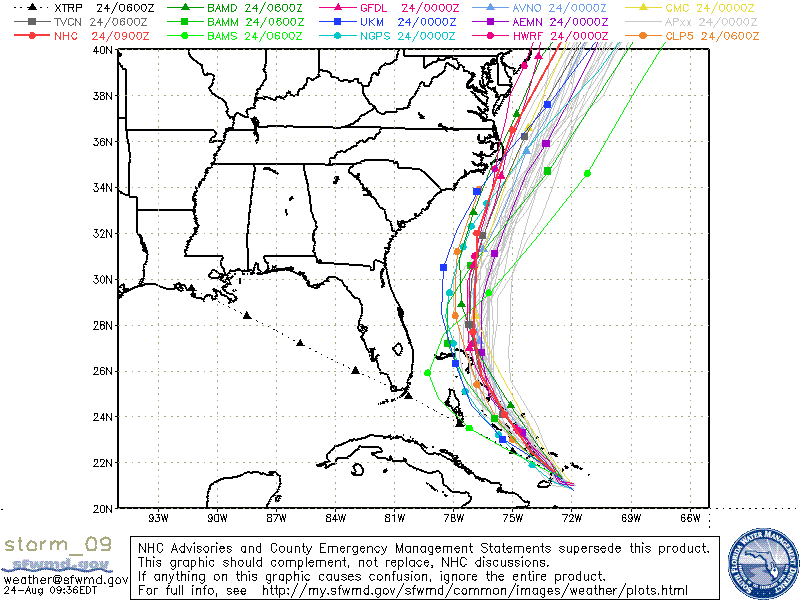 In regard to steering, I wrote up a post about how tropical cyclones are influenced by ridges and troughs.  Here is an image I created showing a scenario of a cyclone feeling a weakness between an area of high pressure in the Atlantic and an approaching trough from the west:

Tropical cyclone feeling a weakness between low and high pressure which pulls the system to the northwest and eventually northeast out to sea.

Now, let’s take a look at the steering pattern today:

High pressure in the Atlantic and a trough to the north will influence Hurricane Irene to travel further north. Image Credit: University of Wisconsin-Madison

The thing that is missing from the image above is the trough (currently located in western Canada) that will push into the eastern United States this weekend, which should recurve Irene out to sea.  If the trough is slower or weaker, then Irene will have a higher impact in the northeast United States. If the trough is stronger and faster, then Irene will feel it and will have a track further east.  Timing is everything, and model runs are trying to forecast the dynamics in the atmosphere.  By Friday, we should have a better understanding on the official track for Irene. Until then, everyone from Washington, D.C. to Maine should keep a close eye on this storm.

The biggest threats as of now are in the Bahamas and Turks and Caicos, as an intensifying storm is approaching these islands. So far, hurricane warnings have been issued for the Bahamas.  Hurricane watches could be posted later tonight or tomorrow as Irene gets closer to the United States.  Conditions are favorable for further intensification as Irene travels northwest through the Bahamas. By Thursday morning, the NHC is forecasting Irene to become a powerful Category 4 storm with winds of 135 mph.  Hurricane-force winds  (74 mph or greater) extend 50 miles from the center of the storm.  Tropical storm force winds (39-73 mph) extend 205 miles away from the center.  With this in mind, Irene is a large and powerful cyclone that could cause implications off the U.S. coast even if it does not make a direct hit.  I believe Irene will weaken slightly as the storm moves further north towards North Carolina due to drier air trying to spin into the system from the continental U.S.

The Northeast should expect strong winds, heavy surf, and a lot of rain. Flooding could be a huge issue, especially since many areas in this region have already received a lot of rain recently (surpluses of over five inches of rain).  With soil moistures really high, it might not take hurricane force winds to knock down trees.  The Hydrometeorological Prediction Center (HPC) is forecasting seven to ten inches of rain along the northeast coast with some totals near the center of Irene approaching 12 inches. 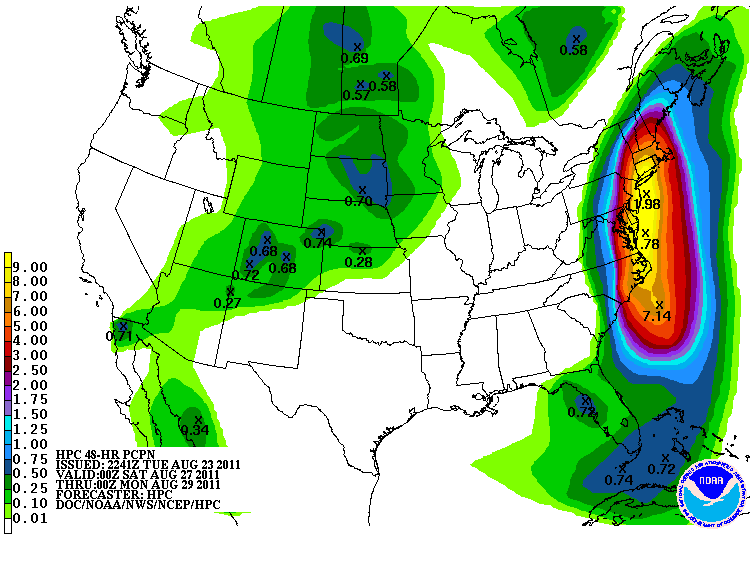 Stay tuned for further updates this week.  I hope to have another writeup later this week about Hurricane Irene. If you live anywhere along the cone of uncertainty, please be prepared! There are chances Irene could avoid the United States, but the large size of the storm will likely guarantee some type of impact along the eastern coast.