Tropical Storm Irene has been gradually weakening and is beginning to lose tropical characteristics. Irene will continue to produce rainfall across northern New England and into portions of New Brunswick and Nova Scotia later today. On the southern side of the storm, winds will continue to gust throughout southern New England in places such as New York City, Long Island, Boston, and Philadelphia. These strong winds will continue throughout the evening, which can easily bring trees down as the soils are extremely saturated from the excessive rainfall of the past few days. People who kept power today might lose power after Irene leaves the area. How unfortunate is that? Irene will have an increase in forward speed and will eventually move into Greenland. 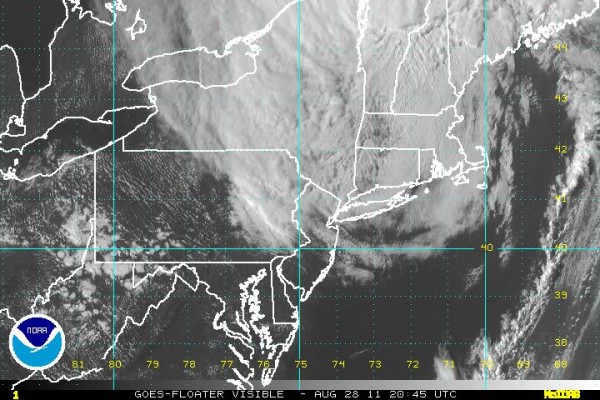 Tropical Storm Irene is now heading towards Massachusetts. The central part of the storm is over Connecticut at this time. Tropical storm-like conditions continue with gusts of wind as strong as 70-80 mph and sustained winds at around 40-60 mph. The National Weather Service still forecasts 2 to 4 inches of rain with intense rain bands and wind until later on August 28. By midnight on the U.S. East Coast, the rain should stop, but gusts of wind might persist.

The National Weather Service downgraded Irene to a tropical storm as the system made landfall over Coney Island in New York. The storm is maintaining winds up to 65 mph.

The New York Times is reporting torrential rains, heavy winds and some flooding in low spots in New York City. But overall the impact of Irene on New York has been relatively minor: no storm surges filling up the Holland Tunnel, for example. And that is a blessing for all.

EarthSky will continue to provide updates as they become available.

At 5:40 a.m. EDT on Sunday, August 28, Hurricane Irene made a second landfall in New Jersey near Little Egg Inlet. The last time a hurricane made landfall in New Jersey was back in 1903. Looking at radar images this morning, I am feeling slightly better about this storm as it moves farther northeast. First of all, it looks like the center of Irene will move just east of New York City around 9 or 10 a.m. EDT this morning. The southern side of Irene is drying up. Once the center of Irene pushes through an area, rainfall totals should decrease as most of the heavier precipitation is confined to the north and west. Storm surf can still be significant across Long Island, as high tide is still set for 8 a.m. Irene is a large hurricane, sending tropical storm winds (39 mph-73 mph) outward to 320 miles from the center. Hurricane force winds (74 mph and above) extend 125 miles outward from the center. (The numbers have gotten larger!)

Radar image at 6 a.m. EDT of Hurricane Irene. Most of the rain is located north of the center (currently over southern New Jersey). Image Credit: NWS

CNN is reporting nearly three million people are without power along the eastern coast.  As of 6 a.m. EDT today (10 UTC), 10 deaths have been reported (five in North Carolina, three in Virginia, one in Maryland, and one in Florida).  There have been a few reports of tornadoes causing some damage to buildings in portions of Delaware.

Irene is still classified as a Category 1 hurricane with 75 mph sustained winds.  However, I am unable to find a single location with hurricane force winds.  Many areas have sustained winds around 35 mph with gusts over 50-60 mph.  In my opinion, Irene is now actually a weakening tropical storm.

The threat for flooding remains the biggest issue for Irene.  We are already receiving reports of cars being submerged under water in portions of Huntington, NY.  We will have a better idea how much damage Irene has caused as we transition from night to day. 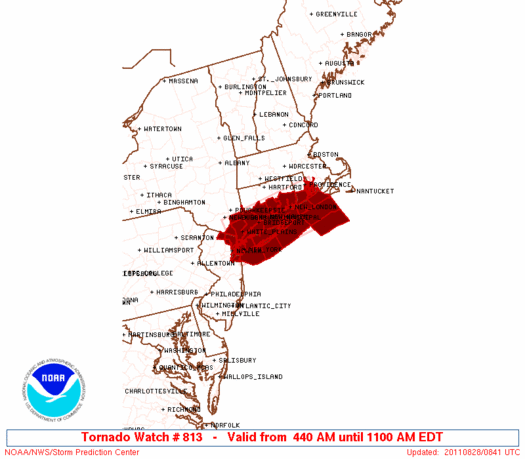 At this writing, Hurricane Irene has re-emerged over the Atlantic Ocean. At least 10 to 14 inches of rain have already fallen in portions of eastern North Carolina with the highest amount, 14 inches, at Bunyan, North Carolina. A storm surge height of 4.6 feet has been observed at Oregon Inlet, North Carolina. Irene is a large hurricane, sending tropical storm winds (39 mph-73 mph) outward to 290 miles from the center. Hurricane force winds (74 mph and above) extend 85 miles outward from the center. 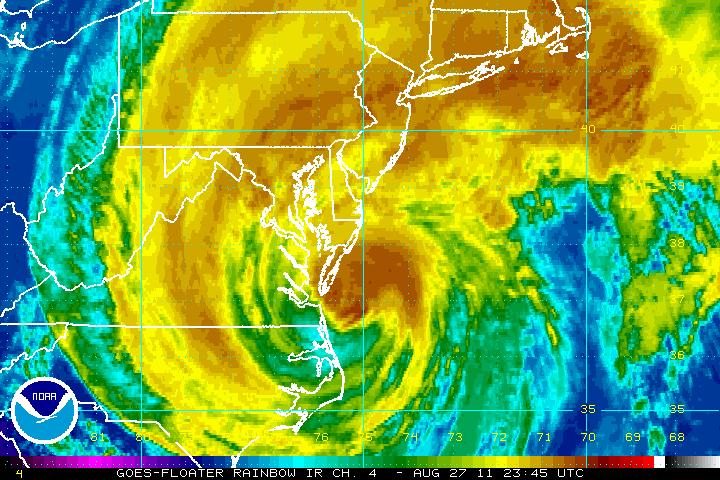 Hurricane Irene is starting to transition from a tropical cyclone to an extratropical storm. Image Credit: NHC 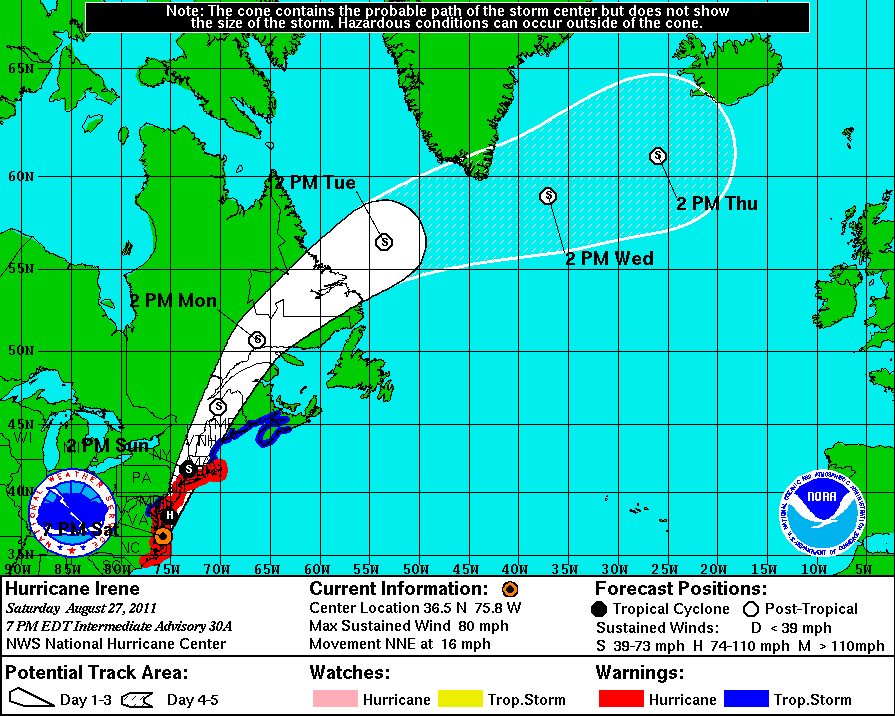 The National Hurricane Center (NHC) is forecasting Irene to be over New York City tomorrow morning (August 28) around 8 a.m. As you can see from the forecast track, the NHC has Irene hitting New York City as a strong tropical storm, with winds around 70 mph. However, don’t let the winds fool you.  Irene is still a powerful storm, and should be respected.

The biggest surprise of Hurricane Irene is the very low pressure and the weakening wind speeds.  Typically, the lower the pressure, the stronger the storm.  However, Irene is completely different because the storm is so large that the winds are spreading out all across the system instead of consolidating around the center of the storm.

I am worried that people will see “Category 1 hurricane” and the term “weakening” and assume the storm is overhyped.  A 951 mb hurricane is typically associated with a Category 3 storm.

Here’s a few things I want to emphasize:

– Flooding and storm surge are the biggest concerns for parts of New England.  Due to the large size of Irene, storm surge could easily match a Category 2 or 3 storm surge.
– Since the ground is saturated, trees will easily fall over in tropical storm force winds. Move your vehicles away from trees, and stay in a room that is away from trees that could come crashing into your house.
– DO NOT DRIVE!  Flooding will be a major issue, and driving should be prohibited. Have you ever heard the phrase “Turn around, don’t drown”? Remember it!  If you see water rising on the streets, do not drive into it.  A lot of deaths occur when people decide to drive in flooded streets.
– Highest tide of the month due to a new moon this weekend will occur around 8 a.m. EDT Sunday morning for the U.S. Northeast coast.  The National Hurricane Center is forecasting Irene to be right over New York City at this same time.  If this occurs, the storm surge will be larger.

MORE SO THAN WITH MOST STORMS…THE WINDS WITH IRENE INCREASE SHARPLY WITH HEIGHT ABOVE THE SURFACE.  AS IRENE MOVES THROUGH AREAS WITH HIGH-RISE STRUCTURES … THESE STRUCTURES WILL EXPERIENCE WINDS SIGNIFICANTLY STRONGER THAN INDICATED BY THE ADVISORY INTENSITY.  WINDS AT THE 30-STORY LEVEL WILL LIKELY BE 20 PERCENT HIGHER THAN AT THE SURFACE … AND WINDS 80-100 STORIES UP COULD BE ABOUT 30 PERCENT HIGHER THAN AT THE SURFACE.

Irene will slowly weaken as the storm pushes northeast into New England.  By Sunday night, the storm will begin to transition from a warm-core tropical system to an extratropical system – which is simply a strong area of low pressure.

Here’s what the Hydrometeorological Prediction Center (HPC) is forecasting in regard to rainfall totals due to Irene:

Rainfall totals for the next three days. Many areas could easily see over 10 inches of rain. Image Credit: HPC 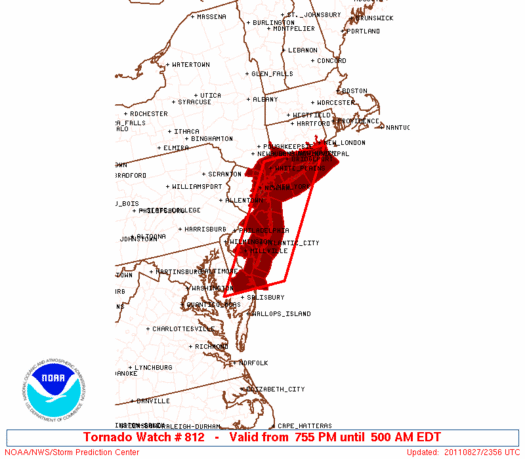 At 2 p.m. EDT (18 UTC), Irene was about 45 miles west-northwest of Cape Hatteras, North Carolina, and about 95 miles south of Norfolk, Virginia. The storm was moving north-northeastward at 15 mph. CBS News says there have been three deaths reported. Bloomberg says that millions of homes and businesses are likely to lose power for several days as Hurricane Irene plows up the eastern coast of the U.S., ripping down power lines and flooding underground natural gas and electric equipment.

Hurricane Irene pounded North Carolina throughout Friday night, but according to Governor Bev Perdue, the force isn’t as great as was originally forecast. She said there are high winds and flooding problems, and the eastern counties will see up to nine inches of rain. More than 227,000 homes and businesses have lost power. Transportation in the eastern part of North Carolina has been affected, she said. Ten major roads are closed and airports have shut down.

Hurricane Irene, now a Category 1 hurricane, made landfall near Cape Lookout, North Carolina at around 7:30 this morning (Saturday.) 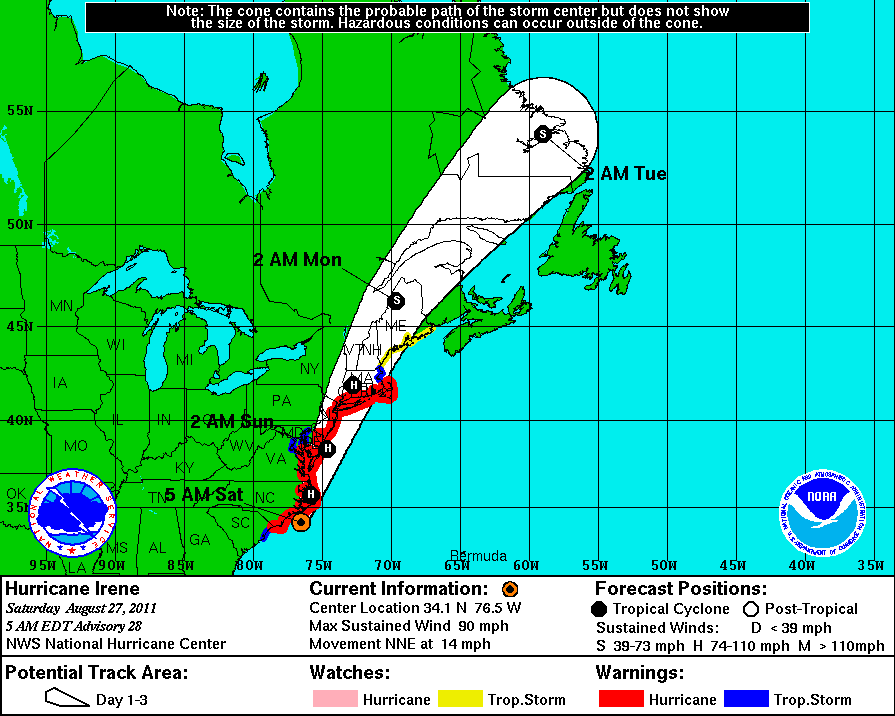 Hurricane Irene is 35 miles south of Cape Lookout, North Carolina and 95 miles south of Cape Hatteras.  Irene will likely make landfall sometime around 7 a.m. EDT (11 UTC) – one hour from the time this post was updated.  Hurricane Irene has weakened into a Category 1 hurricane as dry air and southwesterly shear has been entering the western side of the storm.  Rain and flooding, not wind, are still the major concerns. 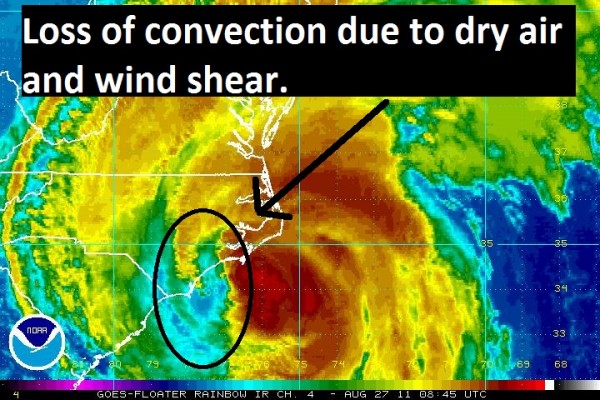 Rainbow infrared image of Hurricane Irene at 5:30 a.m. EDT. Wind shear and dry air are decreasing the convection on the left (west) side of the storm. Image Credit: NHC

Kinston, NC:  North winds sustained at 31 mph with a gust of 47 mph

Bayboro, NC: Northeast winds sustained at 43 mph with a gust of 61 mph

Southport, NC: Northwest winds sustained at 32 mph with a gust of 51 mph

Hatteras, NC: East winds sustained at 46 mph with a gust of 80 mph

At least 100,000 people across North Carolina are without power as large, powerful Hurricane Irene pushes north.

Hurricane Irene is fully capable of spawning a small EF0-EF1 tornado throughout the day.  A possible tornado has already hit Columbia, NC with reports of damage and some injuries. Tornado watch expires at 11 a.m. EDT today for the lower eastern shore of Maryland, far eastern North Carolina, southeast Virginia, and the coastal waters. 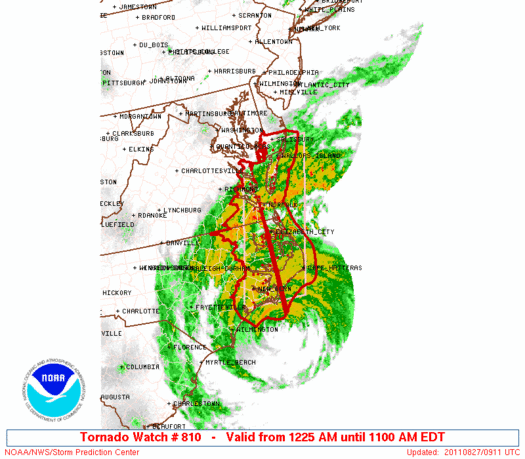 I stress, wind is not the biggest impact with Irene. Storm surge, heavy rains and flooding are the huge concerns as Irene pushes north into New England.

National Weather Service has issued a tornado watch for portions of eastern North Carolina.  Tropical systems can quickly spawn tornadoes, but they are typically weak and short-lived when they form.  The tornado watch expires at 5 a.m. EDT Saturday morning. 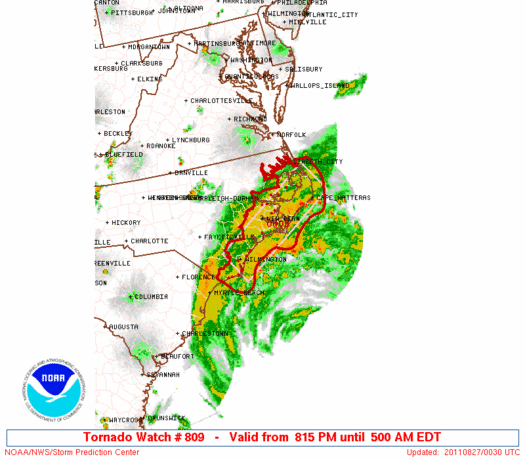 UPDATE: Friday, August 25, 5 p.m. EDT (21 UTC) Hurricane Irene is forecast to hit parts of the eastern North Carolina coast as a strong Category 1 or weak Category 2 hurricane. Irene will then push to the north and gradually weaken into a minimum Category 1 (75 mph) hurricane/strong tropical storm as it approaches New Jersey and the New England states.

Preview possible storm surge flooding in NYC due to Irene

Here is a map of the NYC evacuation zones. Another version (PDF). 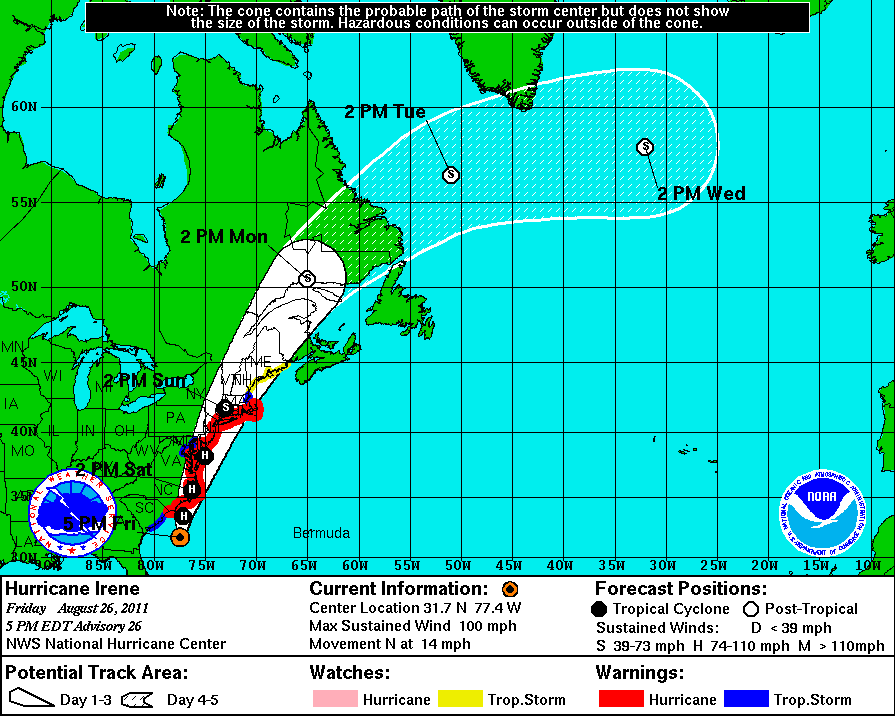 Hurricane warnings are still in effect for the Grand Bahama and Abaco Islands, and the coast of North Carolina from the Little River Inlet northward into Sandy Hook, New Jersey. Hurricane watches extend north from Sandy Hook, New Jersey to the Merrimack River, Massachusetts.  Tropical storm warnings include portions of South Carolina north of Edisto Beach to Little River Inlet and around the Chesapeake Bay from Smith Point northward into the Tidal Potomac. 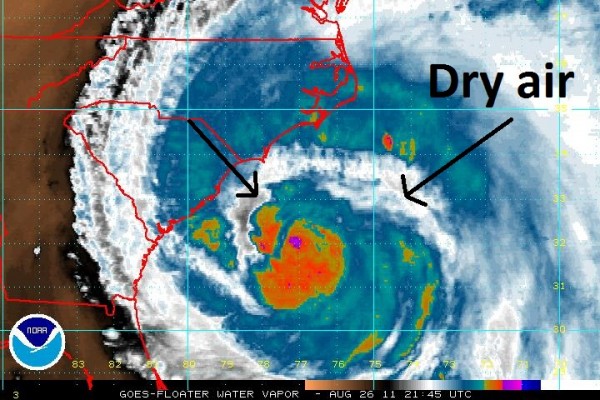 A weakening storm is fantastic news for North Carolina. However, the effects of Irene will still be felt across the area.  There is still a chance, probably a 30 percent probability, that Irene could gain some strength before the storm pushes into North Carolina due to very warm waters from the Gulf Stream.  However, it will need time to organize because of the large size of the storm. 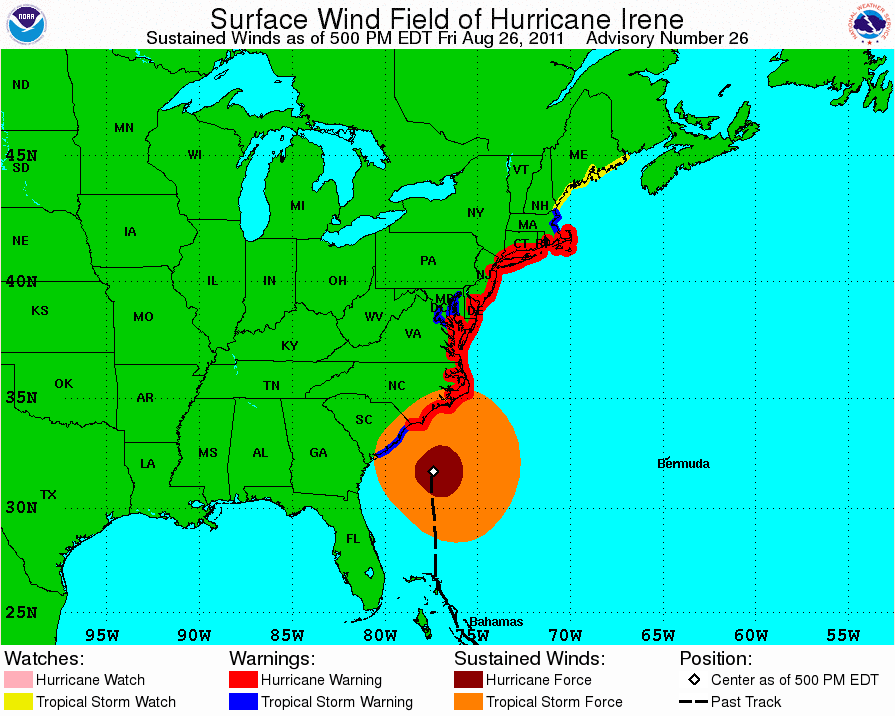 I stress, wind is not the biggest impact with Irene. Storm surge, heavy rains and flooding are the huge concerns as Irene pushes north into New England.