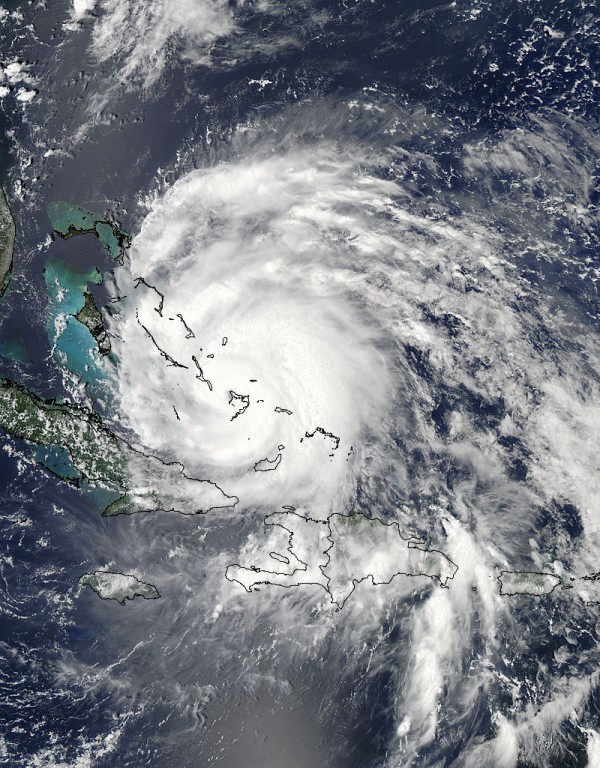 (August 26, 2011) Hurricane Irene, the first major hurricane of the 2011 Atlantic hurricane season, is finally pushing north and will likely cause significant impacts across North Carolina, Virginia, Delaware, Maryland, New Jersey, New York, Philadelphia and points northward this weekend.  Significant storm surge and inland flooding is very likely, and I wouldn’t be surprised if this becomes the 10th billion dollar disaster for the United States in 2011.  If this is the case, 2011 will be a year to remember in regards to natural disasters.

I am writing this post to let everyone know the seriousness of Hurricane Irene.  The large size of the storm is one of the biggest reasons storm surge is a major concern.  Irene is currently a Category 2 hurricane with winds of 110 miles per hour and a pressure of 945 millibars.  I base the power of a hurricane on barometric pressure.  A 945 mb pressure is equivalent to a Category 4 hurricane in my book, so do not let your guard down because the storm is “weaker.” Large storms have to spread the winds out from the center, so that explains why we have not seen significant wind speeds occurring in the storm.  I would not be surprised to see the storm intensify later this afternoon as it travels over a stretch of the Gulf Stream which contains very warm water temperatures, which can easily fuel the storm.  Hurricane force winds (greater than 74 miles per hour) extend 90 miles from the center of Irene, and tropical storm force winds (39-73 mph) extend 290 miles from the center.  The NHC has been worried about this storm for the past week, and has required all of the NWS stations for the majority of the United States to release radiosondes (air balloons) every six hours (instead of every 12 hours) so they can have better model support for Irene.

Video of Irene from the Space Station

There’s two things to look at.  First of all, here’s the latest forecast track of Hurricane Irene by the National Hurricane Center (NHC): 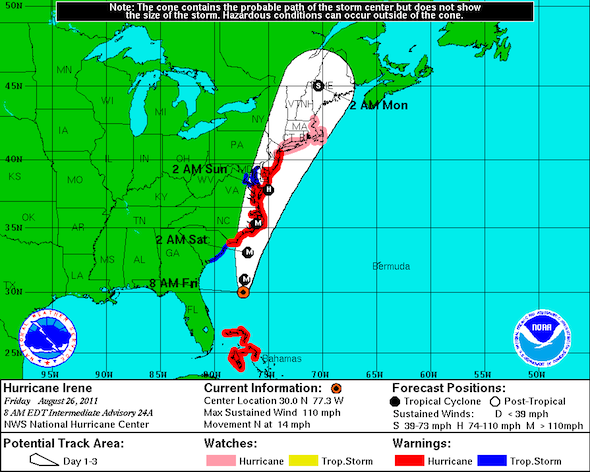 Forecast track of Hurricane Irene through the East Coast. Irene could move anywhere in the cone, so don’t let your guard down! Image Credit: NHC

If the forecast track ends up pushing further east, then the impacts will not be as significant because the northeast quadrant of the storm would stay over water.  The northeast quadrant of the storm is always the most severe part of a hurricane.  It produces winds from the southeast, which would bring winds to the shore.  Also, this is the same quadrant that would produce a greater threat for isolated tornadoes. I have a feeling that this track could move slightly east as the day continues. However, don’t let your guard down because there is a chance for Irene to push farther west.

According to Dr. Jeff Masters from Weather Underground:

Irene is capable of inundating portions of the coast under 10 to 15 feet of water, to the highest storm surge depths ever recorded. The National Hurricane Center (NHC) is forecasting water levels to rise at least five to ten feet above ground level within the hurricane warning area. With a storm nearly the size of a third of the eastern United States, a Category 1 hurricane could easily bring Category 2 or stronger storm surge to these areas across the Northeast.

As of now, Delaware, Virginia, New Jersey, Maryland, Conneticut, North Carolina, and New York have already declared a state of emergency ahead of the storm. Hurricane warnings have been issued for the Grand Bahama and Abaco Islands, and the coasts of North Carolina from the Little River Inlet northward into Sandy Hook, New Jersey. Hurricane watches extend north from Sandy Hook, New Jersey to the Merrimack River, Massachusetts.  Tropical storm warnings include portions of South Carolina, north of Edisto Beach to Little River Inlet and around the Chesapeake Bay from Smith Point northward into the Tidal Potomac.

Brian Norcross, the hurricane specialist for the Weather Channel, wrote on his Facebook page:

The extreme threat to the Mid-Atlantic and Northeast coasts continues this morning. It is impossible to say at this point whether Irene will resemble the massive flood and power outage of Isabella, the complete coastal destruction of the Ash Wednesday storm of 1962 in the Mid-Atl through NJ, the 1821 direct hit on NYC flooding parts of Manhattan and incapacitating the city, the 1938 destruction on Long Island, or Carol in New Eng… or ALL. This requires HIGH alert and preps NOW. Irene’s forecast track looks most analogous to the 1821 Norfolk to Long Island Hurricane (Google it). We have long feared this track spreading life-threatening destruction from NC to NYC and Long Isl and into New Eng. While we cannot pin down the exact track, the main point is that a track out to sea looks very unlikely at this point. Prepare today to evacuate if ordered and have enough supplies to stay home for ONE WEEK with no power, water, or communications. 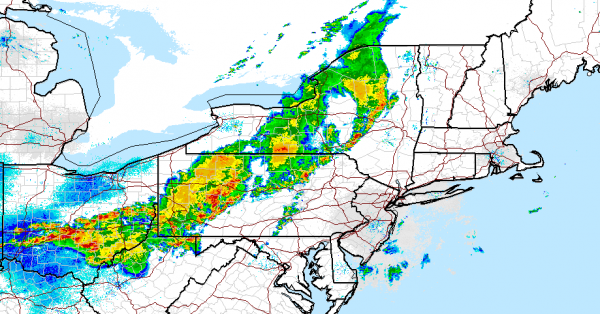 Rain in the Northeast has been common lately. Heavy rain moved in on August 25, making the ground more saturated – a setup that does not bode well as Hurricane Irene approaches the area. Image Credit: NWS Radar

Did you know that Sunday is a new moon?  What does that mean?  A new moon means tides will be at the highest levels for the month.  If you factor Hurricane Irene’s storm surge, these two do not go well together.

It is important for everyone in New England to stock up on supplies before the storm hits. It is very likely that power could be out for a week. It is important that you have plenty of drinking water and food to last you a week. Recent rains across the Northeast has allowed the soil to be saturated, which is bad news. With saturated soils, it will only take tropical storm force winds to knock trees down and cut power to thousands, if not millions of people.

THIS POTENTIALLY COULD BE EXTREMELY DESTRUCTIVE WITH MASSIVE DISRUPTIONS TO SOCIETY AND COMMERCE ALONG ITS ENTIRE TRACK WITH VERY HIGH WINDS/STORM SURGE/OCEAN OVERWASH/BEACH EROSION/SOUND AND BAY SIDE COASTAL FLOODING AND EXTREME TIDE POTENTIAL. WIDESPREAD HEAVY RAINS IN THE 6-10 INCH RANGE WILL BE COMMON WITH GREATLY INCREASED INLAND FLOOD POTENTIAL. 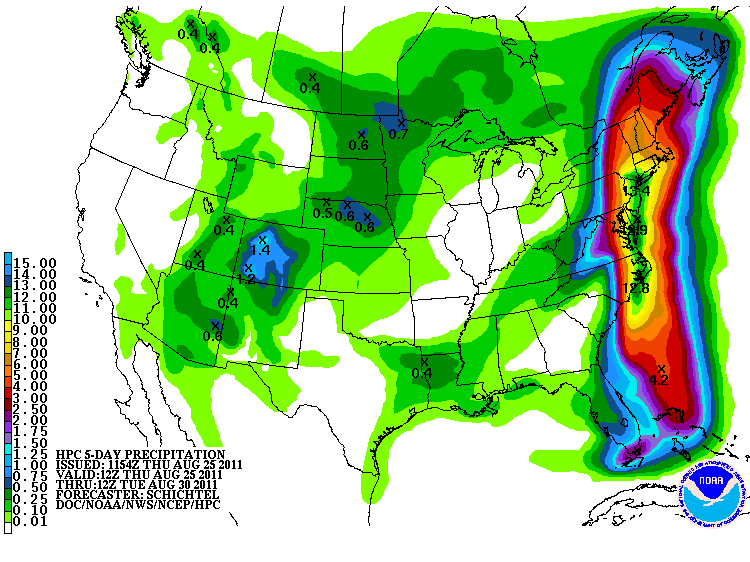 HPC rainfall totals through Tuesday morning. Not only will storm surge create flooding, but rainfall totals are going to average 5 to 10 inches with some areas over 12 inches of rain. It is possible that we could see a 100-year flood in parts of the Northeast.

My advice:  Listen to your local government and city officials.  If you do not feel safe in your current location, then leave!  If you are asked to evacuate, do not think twice! Flooding will occur well inland in many areas, and some people could be trapped. In big city areas, flooding conditions can actually flood subways and bring rodents to the surface.

Please stay tuned to all of the NHC forecasts as they come available.  If you lie in the cone of uncertainty, then you are at risk to see significant impacts from Hurricane Irene. Please take the necessary precautions to secure your property.  If you have any questions regarding safety or Hurricane Irene, let me know and I’ll try my best to answer them below.