During the summer of 2010, a mega-heat wave scorched Russia. Temperatures soared to 108oF (42oC), crops wilted and wildfires filled the air with thick smoke. Overall, the Russian heat wave is estimated to have caused the deaths of thousands of people and caused $15 billion dollars in economic losses. Since then, scientists have been trying to determine how much global warming might have contributed to this extreme weather event. Some studies have suggested that the heat wave was caused by natural variability, while others have argued that the heat wave would not have occurred under climate conditions like those of the last century. Now, a team of scientists from Europe has reconciled both perspectives in a study that suggests that global warming set the stage for, but did not directly cause, the deadly heat wave.

This new study by scientists suggests that climate change tripled the chances for a weather event as extreme as the heat wave that scorched Russia in 2010, in contrast to the 1960s. The study was published on February 22, 2012 in the journal Geophysical Research Letters. It is part of an emerging trend among scientists to attempt to discover whether specific weather events – especially extreme weather events such as the Russian heat wave – might be correlated with larger-scale climate change. 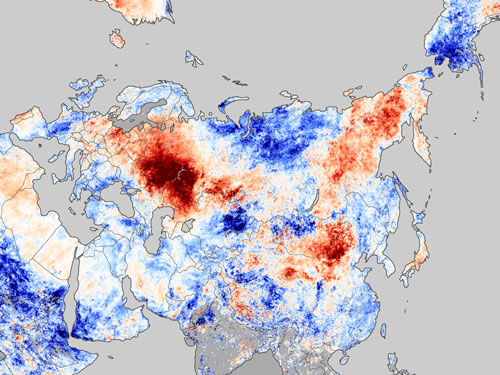 The scientists used a climate model to look at the likelihood of the occurrence of a 2010-magnitude heat wave, both in the 20th century as well as under today’s warmer global climate. They found that in the 1960s an event the size of the 2010-magnitude heat wave could be expected to occur about once in every 99 years. However, they found, the probability of such an event occurring the 2000s has increased to once in every 33 years.

Hence, they conclude that the expected frequency of an extreme Russian heat wave has tripled due to global warming within the last four decades.

Friederike Otto, lead author and postdoctoral research assistant at the University of Oxford’s Environmental Change Institute commented on the findings in a press release. She said:

The scientists were able to run thousands of simulations of their climate model through the weatherathome project. The weatherathome project is supported by Microsoft Research and it uses the spare processing power from volunteers’ idle computers to run state-of-the-art climate models that help scientists learn more about the weather extremes we are likely to encounter in the 21st century.

Myles Allen, professor and head of the Climate Dynamics Group at the University of Oxford also commented on the study in the press release. He said:

Given the cost of extreme weather events, determining how the risks are changing allows scientists to better quantify the events and possibly to help build resilience in society’s responses to them. People deserve to know how much climate change is affecting them and we have the methods to answer the question: How is human influence loading the weather dice?

Bottom line: A new study by scientists from the University of Oxford suggests that global warming tripled the chances for a weather event as extreme as the heat wave that scorched Russia in 2010. The study was published on February 22, 2012 in the journal Geophysical Research Letters.

TwitterFacebookPinterestBufferShare
Posted
May 6, 2012
in
Earth

Thank you! Your submission has been received!
Oops! Something went wrong while submitting the form.
END_OF_DOCUMENT_TOKEN_TO_BE_REPLACED