On the hottest day of the 2011 summer in New York City, a white roof covering was 42 degrees cooler than a traditional black roof.

On the hottest day of the New York City summer in 2011, a white roof covering was measured at 42 degrees Fahrenheit cooler than the traditional black roof to which it was being compared. That’s according to a paper published online on March 7, 2012, in Environmental Research Letters that details the first scientific results from the city’s effort to brighten rooftops and reduce its “urban heat island” effect.

A new study of how different white roofing materials performed “in the field” in New York City over multiple years found that even the least expensive white roof coating reduced peak rooftop temperatures in summer by an average of 43 degrees Fahrenheit. If white roofs were implemented on a wide scale, as the city plans to do, this reduction could cut into the “urban heat island” effect that pumps up nighttime temperatures in the city by as much as 5 to 7 degrees Fahrenheit in the summer, said the study’s lead scientist, Stuart Gaffin of Columbia University. Photo credit: NYCUrbanScape

The dark, sunlight-absorbing surfaces of some New York City roofs reached 170 degrees Fahrenheit on July 22, 2011, a day that set a city record for electricity usage during the peak of a heat wave. But in the largest discrepancy of that day, a white roofing material was measured at about 42 degrees cooler. The white roof being tested was a low-cost covering promoted as part of Mayor Michael Bloomberg’s effort to reduce the city’s greenhouse gas emissions 30 percent by 2030.

On average through the summer of 2011, the pilot white roof surface reduced peak rooftop temperature compared to a typical black roof by 43 degrees Fahrenheit, according to the study, which was the first long-term effort in New York to test how specific white roof materials held up and performed over several years. 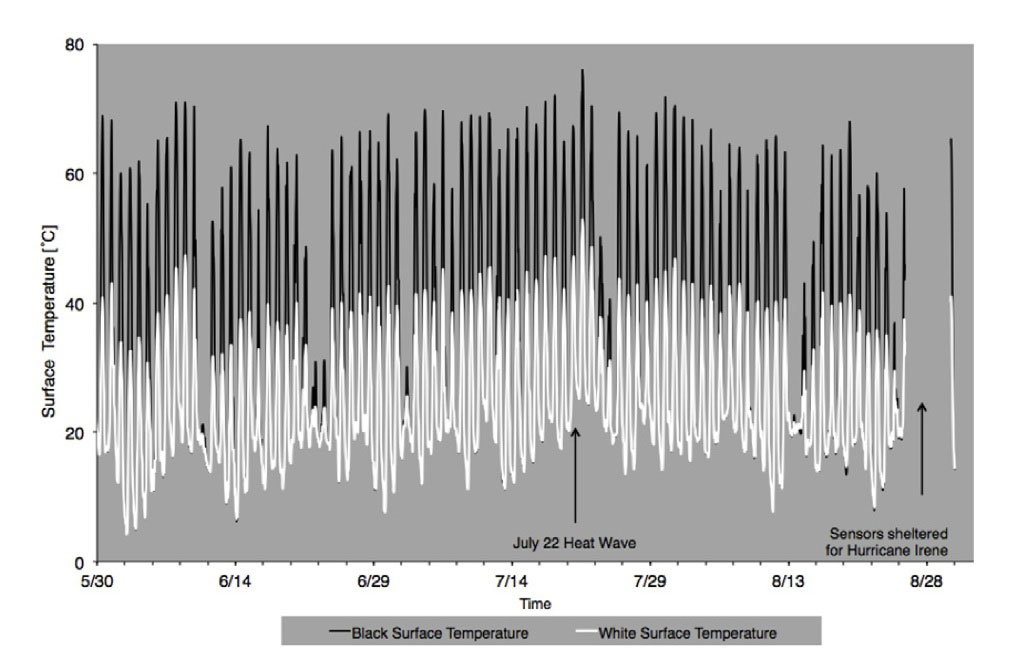 This comparison of white and black roof temperatures at a test site on top of the Museum of Modern Art in Queens reveals the consistent discrepancy between the surface temperature of the two during a period of June-August 2011. The white surface here was the acrylic paint coating promoted by the NYC CoolRoofs program. Image Credit: Gaffin et al.

Widespread installation of white roofs, which New York City is attempting through the NYC CoolRoofs program, could reduce city temperatures while cutting down on energy usage and resulting greenhouse gas emissions, said Stuart Gaffin, a research scientist at Columbia University, and lead author on the paper detailing the roof study.

The urban landscape of asphalt, metal, and dark buildings absorbs more energy from sunlight than forests, fields or snow- and ice-covered landscapes, which reflect more light. The absorption leads to what scientists call an “urban heat island,” where a city experiences markedly warmer temperatures than surrounding regions. New York City’s urban heat island has a more pronounced effect at night, typically raising nighttime temperatures between 5 and 7 degrees Fahrenheit relative to what they would be without the effect, according to Gaffin’s previous research.

The problem leads to everything from spikes in electricity usage and greenhouse gas emissions to poorer air quality and increased risk of death during heat waves.

In recent years, city planners worldwide have discussed cutting into this effect by converting dark roofs to either “living” roofs covered in plants or to white roofs, the far less expensive option. The options tested in this study included two synthetic membranes requiring professional installation and a do-it-yourself (DIY), white-paint coating that is being promoted by the city’s white roof initiative.

With climate change, the urban heat island problem will likely intensify in coming decades, said Cynthia Rosenzweig, a scientist at NASA’s Goddard Institute for Space Studies in New York City and a co-author on the paper. She said:

Right now, we average about 14 days each summer above 90 degrees in New York. In a couple decades, we could be experiencing 30 days or more.

Bottom line: A paper published online on March 7, 2012, in Environmental Research Letters details the first scientific results from New York City’s effort to brighten rooftops and reduce its “urban heat island” effect. According to the paper, on the hottest day of the New York City summer in 2011, a white roof covering was measured at 42 degrees Fahrenheit cooler than the traditional black roof to which it was being compared.