View from space: Lights of London

A satellite view of London – host of the 2012 Olympic Games – at night.

Millions of people are taking pictures of London from many different filters and lenses during these 2012 Olympic Games. But it’s safe to say that none of the views will look quite like this one from the Suomi National Polar-orbiting Partnership satellite. 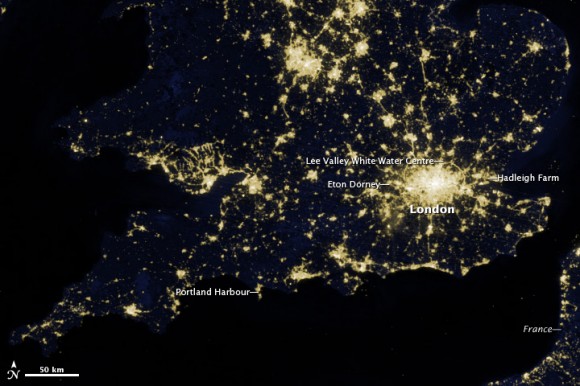 The image above shows London and the southern half of Great Britain. While most of the events in the 2012 Olympics will be held in the greater London area, several other cities and towns will host events, for example canoeing at Lee Valley White Water Center, sailing in Portland Harbour, rowing and canoeing at Eton Dorney, and cycling and mountain bike events at Hadleigh Farm.

Read more from the Earth Observatory