An ice island twice the size of Manhattan is breaking off the Peterman Glacier in Greenland this week. Here are three sequential views from NASA’s Aqua satellite.

An ice island twice the size of Manhattan is visible breaking off the Peterman Glacier in Greenland this week. This is the second time in two years that this glacier has been seen to lose a massive chunk of ice. Scientists first reported this year’s calving on July 16, 2012. NASA’s Aqua satellite captured the view from space, below. 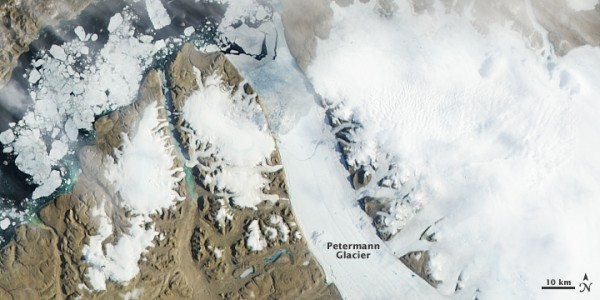 NASA’s Aqua satellite observed a new iceberg calving and drifting downstream from Peterman Glacier in Greenland on July 16–17, 2012. Because Aqua is a polar-orbiting satellite, it makes multiple passes over the Polar Regions each day. At 10:25 Coordinated Universal Time (UTC) on July 16 (top image), the iceberg was still close to the glacier. 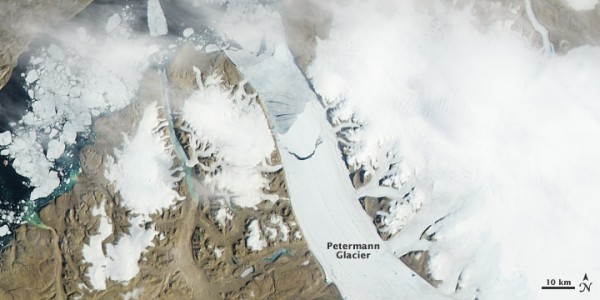 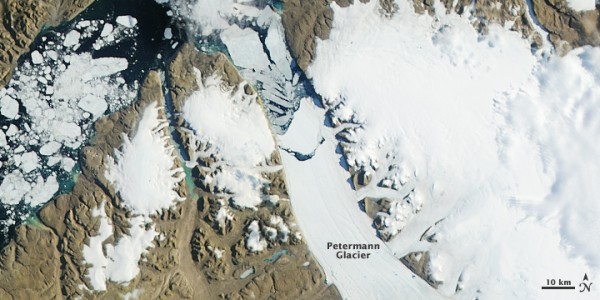 One day later, at 09:30 UTC on July 17, NASA’s Aqua satellite spied a larger opening between the glacier and the iceberg, as well as some breakup of the thinner, downstream ice. The iceberg appears to have made a slight counter-clockwise turn.

Eric Rignot of NASA’s Jet Propulsion Laboratory and the University of California–Irvine said:

It is not a collapse but it is certainly a significant event.

Read more about these images from NASA’s Earth Observatory here.