This week, the National Climatic Data Center (NCDC) released the June 2012 report regarding temperatures and weather events in the United States. NCDC reports June 2012 in the contiguous United States had an average temperature of 71.2 degrees Fahrenheit – two degrees above the 20th Century average. Interestingly, temperatures were actually cooler than average across the Pacific Northwest and along the Southeast for most of June 2012. The warmest temperatures were found in parts of the Intermountain West and the Great Plains. In particular, Colorado saw unusually warm temperatures statewide that were 6.4°F above average. Toward the end of June 2012, temperatures rose dramatically as a large heatwave hit the central U.S., the U.S. Mid-West, and eastward into the U.S. Southeast. Drought has increased greatly across the contiguous United States this year, and more record-breaking highs have occurred in the month of July so far. Overall, January through June 2012 was the warmest six-month period ever recorded for the United States. On top of that, the last 12 months (July 2011 through June 2012) is the warmest 12-month period recorded in the contiguous United States since record-keeping began in 1895.

Take a look at some of these numbers in various cities across the United States that were recorded in June 2012: 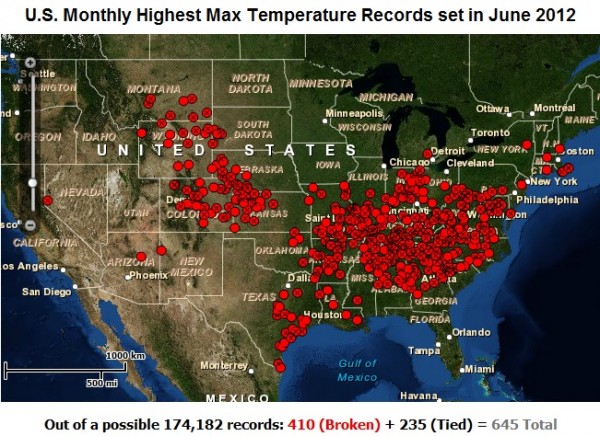 In the month of June 2012, 645 highest-maximum temperature records were broken or tied for the United States. Image Credit: NCDC/NOAA

All-time high temperature records for the month of June:
* denotes the city broke the all time temperature high ever recorded in the city

Note: Some areas broke the all-time temperatures that had recorded earlier in the same month!

–Columbia, South Carolina recorded and tied their all time record daily high temperature of 109°F on 6/29/2012. 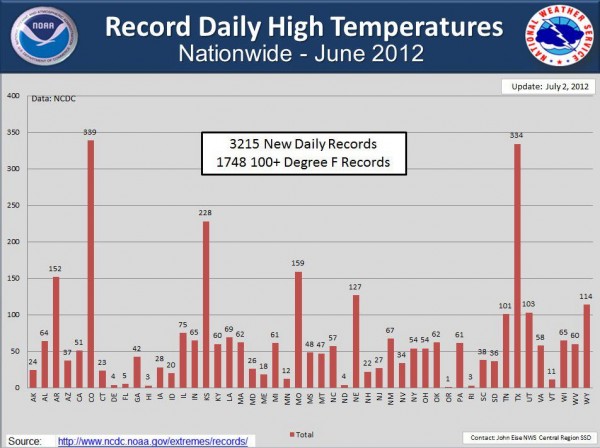 Meanwhile, early July 2012 has brought considerable heat east of the Rocky Mountains. Currently, the biggest areas experiencing major heat – and where we would typically expect it to be hot – is across the desert regions of California and Arizona. How hot has it been? Death Valley, California recorded the hottest temperature recorded in the United States this year with a high of 128°F. This reading makes it the 10th hottest temperature ever recorded in the United States. What is so amazing about this heat is how “cool” the low temperature dropped in Death Valley, California on July 12, 2012. They had a “low” temperature of 107°F! This temperature became the second-warmest low temperature ever recorded in Death Valley. It broke the highest minimum temperature for July 12, 1931 of 100°F. The National Weather Service reports that the last time Death Valley recorded a low of 105°F or greater was on July 11, 1920. Impressive to say the least!

In a report released Thursday, July 12, 2012, the U.S. Department of Agriculture declared natural disaster areas in 1,016 counties and 26 drought-stricken states, making it the largest recorded natural disaster in the U.S. ever. In the most recent image of the drought released by the National Drought Mitigation Center (NDMC), over 60% of the nation is experiencing at least a moderate drought or worse. Out of the 18 primary corn-growing states, 30 percent of the crop is now in poor or very poor condition, which is up from 22 percent the previous week. The failure of crops could cause major economic issues and skyrocket prices for produce and meat across the country. The declaration of a natural disaster for so many counties and states in the U.S. was issued so that aid could be given to the farmers and ranchers experiencing failing crops.

Good news: this past week has brought much needed rains to the U.S. Southeast thanks to a stationary front in the region providing copious amounts of moisture which has helped the region. This weekend, more rains are expected across the Ohio-Valley and across the U.S. eastern seaboard.

Speaking of drought, Indianapolis, Indiana airport is experiencing the longest dry spell in 104 years. The time period of June 1-July 11 will remain a meager 0.09 inches for the city. According to the National Weather Service, the only longer dry spell was the 45-day period from August 13-September 26, 1908 when the Indianapolis area measured only 0.09 inches of rainfall. The city has also recorded 15 consecutive days of temperatures at or above 90°F, which is projected to make it the fourth such occurrence of hot weather for the city. The record for consecutive 90 degree days occurred in 2011, when the city recorded 23 days. The record broken in 2011 broke records recorded in 1936 and 1901.

The Climate Prediction Center forecasts above-average temperatures for July 2012, for most of the U.S. Image Credit: CPC