View from space: Layers of atmosphere on the horizon

Gorgeous. See the layers of our atmosphere on the horizon.

A view of the horizon from the International Space Station that allows scientists to detect the gases and particles that make up the different layers of our atmosphere.

For the rest of us …. gorgeous.

Click on the image (below) to see it BIG. 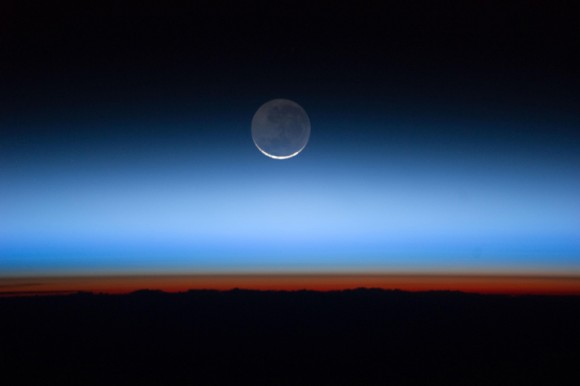 Click the image above to see a larger version. Image credit: NASA

Astronauts aboard the International Space Station captured this digital photograph on July 31, 2011.

Here are the layers of atmosphere you can see in this image:

Closest to Earth’s surface, the orange-red glow reveals the troposphere. It’s the lowest, densest layer of atmosphere, and the one we live in.

A brown transitional layer marks the upper edge of the troposphere, known as the tropopause.

The milky white and gray layer above that is likely a slice of the stratosphere with perhaps some noctilucent clouds in the mix.

The upper reaches of the atmosphere—the mesosphere, thermosphere, and exosphere—fade from shades of blue to the blackness of space.

The different colors occur because the dominant gases and particles in each layer act as prisms, filtering out certain colors of light.