Striking changes in two satellite images of the Amazon rainforest between 1972 and 2012.

The two images below – both acquired by the NASA’s Landsat satellite – give you the view from space of deforestation that has taken place in the Amazon rainforest in Brazil between 1975 (left) and 2012 (right). 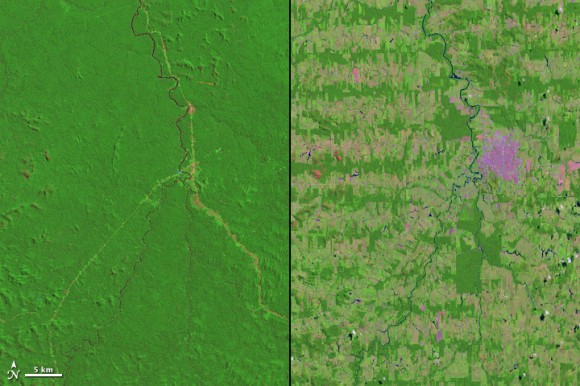 Rondônia is a state in western Brazil.

The images show a portion of Rondônia, a state in western Brazil.

Access to this remote region began with the building of a major road stretching from north to south. Secondary roads were then slowly cut through the dense forest at right angles to the initial road. Settlers cleared the area by first cutting and then burning the forest. As farmed lands grew larger and closer together, they began to merge into a large area of deforestation with a distinctive fishbone pattern.

Researchers say that between 1980 and 1992, more than 1,000 square miles (2,500 square kilometers) of forest in Rondônia was lost each year. The beginning of the loss coincided with a 1979 decision by Brazil’s Program of National Integration to build roads in the forest and to offer cheap land for agriculture.

In recent decades, the center of deforestation in Brazil has shifted east to the states of Mato Grosso and Pará, where large tracts of land are being cleared for mechanized agriculture, rather than small farms. Even so, Brazil’s overall rate of deforestation has slowed, attributable in part to more rigorous enforcement against illegal deforestation and logging activities.

Bottom line: Two images were taken by the Landsat satellite in 1975 and in 2012 show deforestation in the Amazon rainforest.