EarthSky interviews a geophysicist about the August 22 and 23, 2011 earthquakes in Colorado and the U.S. eastern seaboard.

At this point, we don’t think they are related. Basically, the earthquake in Colorado happened in an area which had pretty significant seismic activity in the past. The quake in Virginia was rather unusual. The possibility of earthquakes occurring in the areas always exists, though.

In other words, there is is no such thing as an aseismic area – an area without seismic activity. Virginia does not lie in an area close to a tectonic boundary, but that doesn’t rule out the possibility of Virginia having a 5.9 magnitude earthquake.

Why did Virginia (and the East Coast) experience an earthquake then?

We don’t know. Seismology is a young science. We’ve got only 50 years of hi-tech information. And this earthquake is probably several million years in the making – before humans were walking on the Earth! There were several million years of tectonic stresses being accumulated in minor cracks and faults near the U.S. eastern seaboard, and at some point, these faults are going to give way. And in my scientific opinion that is likely the case for the Virginia quake. 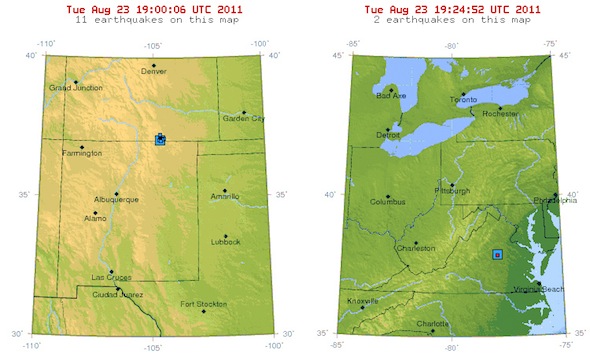 Earthquakes often happen in series. The 5.3 Colorado quake was one of eight that happened yesterday. Is the Virginia quake a foreshock? Will there be others?

In the case of the Virgnia quake, we can definitely expect more aftershocks. Earthquakes of this magnitude do generate aftershock sequences. Very likely possibility. There could be earthquakes in magnitude 5 range. We could see those.

As for this earthquake being a precursor … we don’t know. For example, the big Japan earthquake earlier this year had a precursor quake of 7.2 magnitude a couple days before the 9.2 big one happened. But at the time the 7.2 occurred, we didn’t know that it was a foreshock. In the Pacific area, earthquakes are common.

Could a really big earthquake – say, a magnitude 8 – hit the U.S. eastern seaboard, in the same way that big earthquakes might hit Los Angeles or San Francisco?

How about in Colorado?

In Colorado, there was a significant quake last night – the largest in Colorado’s recorded history. But, we know that’s an active area within the continental North American plate.

By the way, there was some question whether oil and natural gas mining were causing the activity. Mining does not appear to be causing it. This is natural seismicity.

What’s the most important thing you want to tell EarthSky’s global audience about the earthquakes in Colorado and Washington D.C. on August 22 and 23?

We need to remember that these are Earth processes that have been active for several million years. In this case, one thing is really, really important for people to understand and know. That is, there is not a single point on the surface of Earth that is free of natural hazard. The only thing we can tell the public is that you need to stay informed. You need to be aware. We haven’t gotten to the point in earthquake science where we can predict or prevent. But we can definitely minimize the damage, but, for that, we need to have a really educated public.